ASIA FRUIT LOGISTICA ON takes place online from 17-20 November, connecting exhibitors to buyers and sellers in Asia. Among the activities already held was the Asia Fruit Awards.

The Asia Fruit Awards, the annual pan-Asian awards for the fresh produce business, are presented by ASIA FRUIT LOGISTICA and ASIAFRUIT MAGAZINE. The awards celebrate excellence and recognise outstanding achievement for the best players in Asia’s fresh fruit and vegetable business, with the winners selected by the two organisations.

The winners were announced at ASIAFRUIT CONGRESS ON, Asia’s premier conference event for fresh produce decision-makers, which took place online today for the first time in its more than 20-year history. ASIAFRUIT CONGRESS ON livestreamed from ASIA FRUIT LOGISTICA ON, the new online meeting place for the thousands of visitors who attend Asia’s premier fresh fruit and vegetable trade show every year, with the winners beamed in to accept their accolades.

The Asia Fruit Award is given in three core categories – ‘Marketing Campaign of the Year’, ‘Importer of the Year’ and ‘Produce Retailer of the Year’ – while the Impact Award recognises a person or a company who has made a significant contribution to developing the fresh produce business in Asia.

T&G Global, the New Zealand-headquartered global fresh produce marketer, won the Marketing Campaign of the Year. The powerhouse apple grower-marketer was recognised for its pan-Asia efforts to promote and position Envy and Jazz apples as premium brands.

Introducing the winner, Asiafruit Magazine editor John Hey said the award recognised T&G Global’s efforts over a number of years, and across a number of markets in Asia. T&G has invested heavily in developing its in-market presence, people and resources, with offices in Japan, China, Thailand, Vietnam and Singapore. This network and infrastructure have enabled the company to develop direct relationships with trade and consumers across these markets, he noted.In Thailand, T&G has made a foray into supermarket retail channels with Jazz and Envy and built awareness via social media. In Vietnam, Envy dominates sales, but T&G has also developed demand for Jazz as a uniquely tangy-sweet refreshing apple. The group has also marketed smaller-sized pre-packed Jazz apples in Asia as a healthy snack targeted at the whole family.

Japan is a tough market to crack for imported apples, but T&G Global has invested to position Jazz as a premium imported apple. The programme includes PR, inspirational recipes from key opinion leaders, and in-store activations to build theatre and create an ‘orchard experience’.

The Envy is the focal point of T&G’s campaign in China, where the company effectively pivoted its promotions to O2O and digital platforms after Covid-19 restricted in-store activations. Tmall live samplings with Chinese actress Liu Tao further strengthened the position of Envy as the ultimate premium apple that engages all five senses.

T&G Global’s head of global marketing, Rebecca Chapman, accepted the award. “Asia is a key region for T&G Global and is pivotal for the success of our flagship Jazz and Envy apples. This award reflects the creative marketing efforts from our Asia team and our passion to bring our growers’ great tasting, high-quality apples to consumers all over the world,” she said.

“It’s a real honour for T&G Global to be recognised with this award, and it will give our global teams the energy to continue to challenge boundaries and connect with consumers in even more innovative ways.” 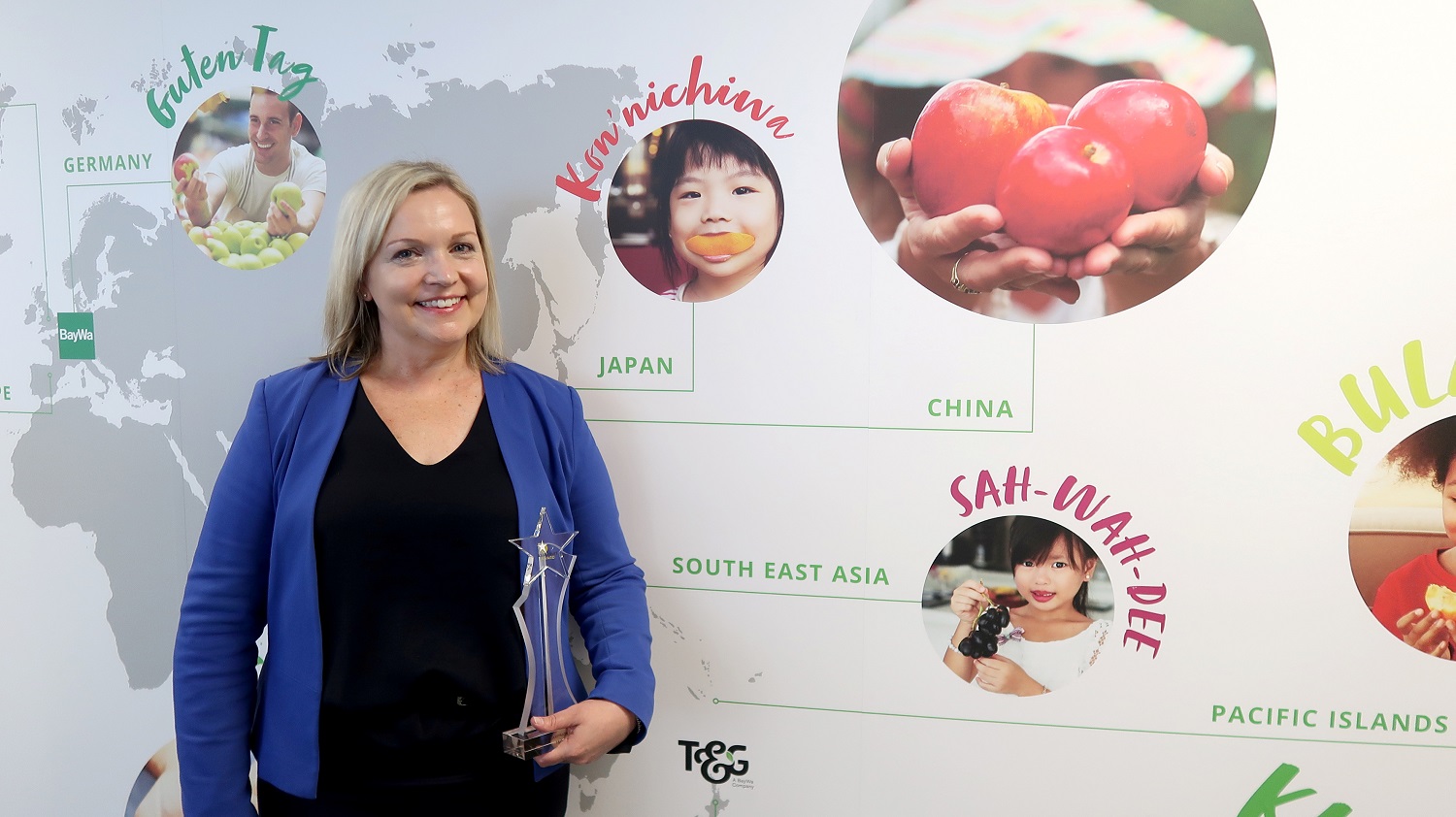 Importer of the Year: Euro-Atlantic

The Importer of the Year Award went to leading Malaysian importer-distributor of speciality fruit and vegetables, Euro-Atlantic.

Set up in 1992 with a goal to expand the range of fruit and vegetables for Malaysian consumers beyond tropical produce, the company was recognised for its pioneering efforts to introduce and develop new products and sources. Euro-Atlantic has played a key role in developing the market for berries, avocados and mushrooms in Malaysia among other categories, Hey noted.

With a strong customer base in food service and hospitality, and a significant percentage of its imports air-flown, Euro-Atlantic has faced a challenging 2020 owing to the impacts of Covid-19. But the company was also recognised for the way it has risen to the challenge, selling more produce online and marketing via social media with online cooking demonstrations as well as making moves towards ‘contactless’ sampling.

Euro-Atlantic also continues to invest in its infrastructure, facilities and staff training to ensure proper handling of its speciality products. Work is now under way on its new headquarters and warehouse operation and the company recently acquired a new packing facility and warehouse.

Managing director of Euro-Atlantic, Ebby Loo, accepted the award. “We extend our heartfelt gratitude to ASIAFRUIT MAGAZINE and ASIA FRUIT LOGISTICA for this outstanding award,” she said. “Greater things are yet to come as we embark on another fruitful year ahead.” 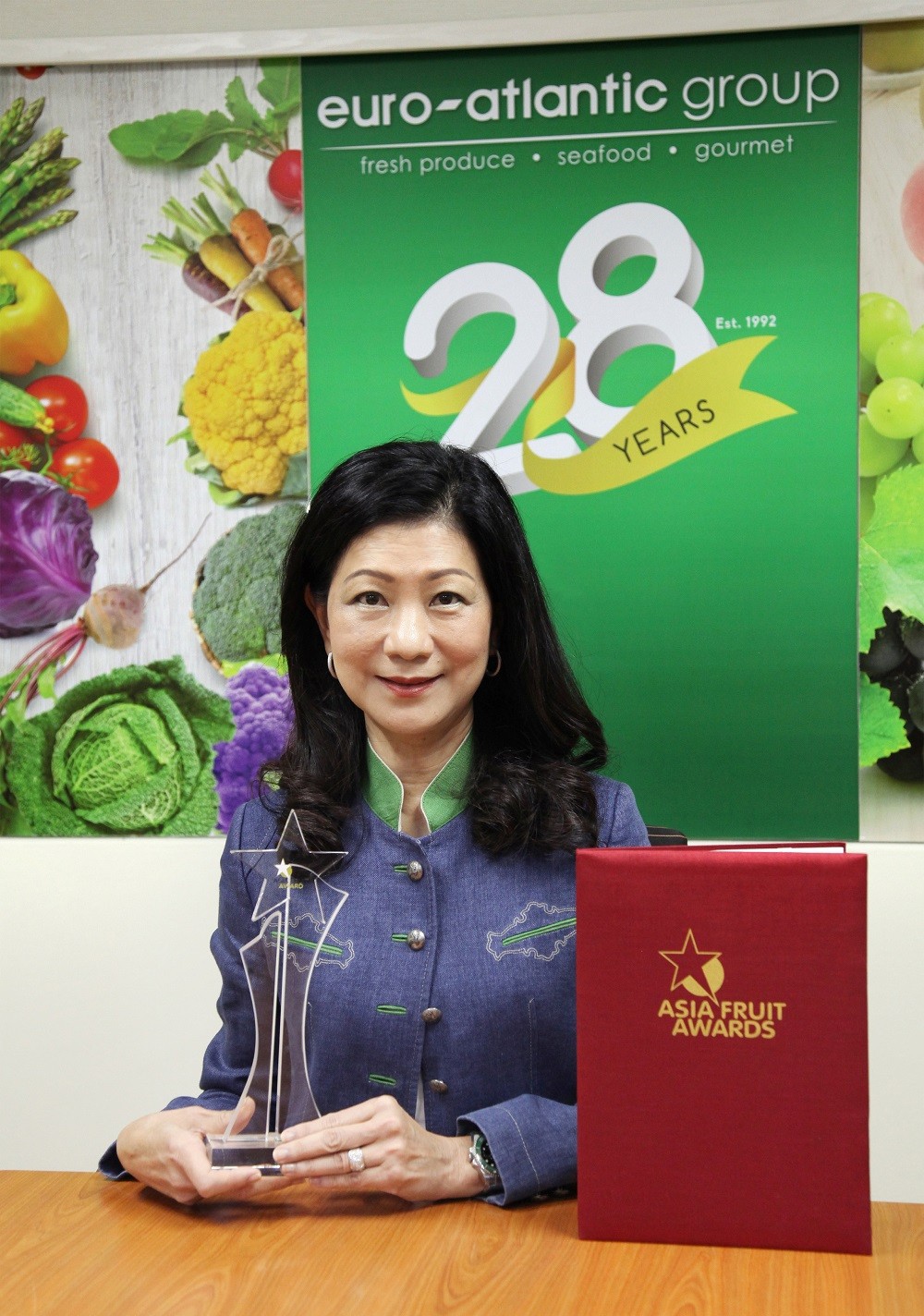 JD Fresh, the fresh food arm of Chinese e-commerce giant JD.com, won the Produce Retailer of the Year Award. JD Fresh was recognised for the strides it’s made in fresh produce retail on a number of fronts. Winning government acclaim for its response to the Covid-19 crisis in China, the e-commerce giant significantly expanded its share of fresh produce sales during the pandemic as consumers switched to buying groceries online.

In addition to its gains in e-commerce, JD has continued to drive the digitisation of fresh food retail China. It has expanded its chain of high-tech supermarkets, 7Fresh, launching new stores and formats. JD also set up its first franchised community fruit stores under the Jingxuanhaoguo banner, a model under which it can apply its brand and its strength in procurement and high-tech solutions to existing mom and pop stores in neighbourhoods.

JD has undertaken a number of large-scale and innovative marketing campaigns for fresh fruit, including 618 and other high-profile shopping festivals. It became the first e-tailer in the world to forge a direct supply agreement with Zespri and delivered the first box of kiwifruit for the season with its autonomous robot.

On the production side, meanwhile, the company continued to invest in developing its JD Farms in key domestic and global growing regions with hi-tech packing and distribution infrastructure. It also forged ahead with its push to transform Chinese agriculture through smart technology, opening a new hi-tech greenhouse growing vegetables near Beijing with the help of Mitsubishi Chemical.

“This has been a landmark year for JD Fresh – it has emerged from the Covid crisis even stronger, with a bigger share of fresh produce sales,” said Hey. “JD has boosted its capabilities in fresh produce sourcing and distribution, and it’s made significant advances in digitising retail and production.”

Purchasing manager of JD Fresh Una Wang accepted the award. “The Produce Retailer of the Year Award is a fantastic recognition from the fresh produce industry of the efforts our team has made this year,” said Wang. “It inspires us to perform even better in the future, leading the e-commerce fresh produce business in China.” 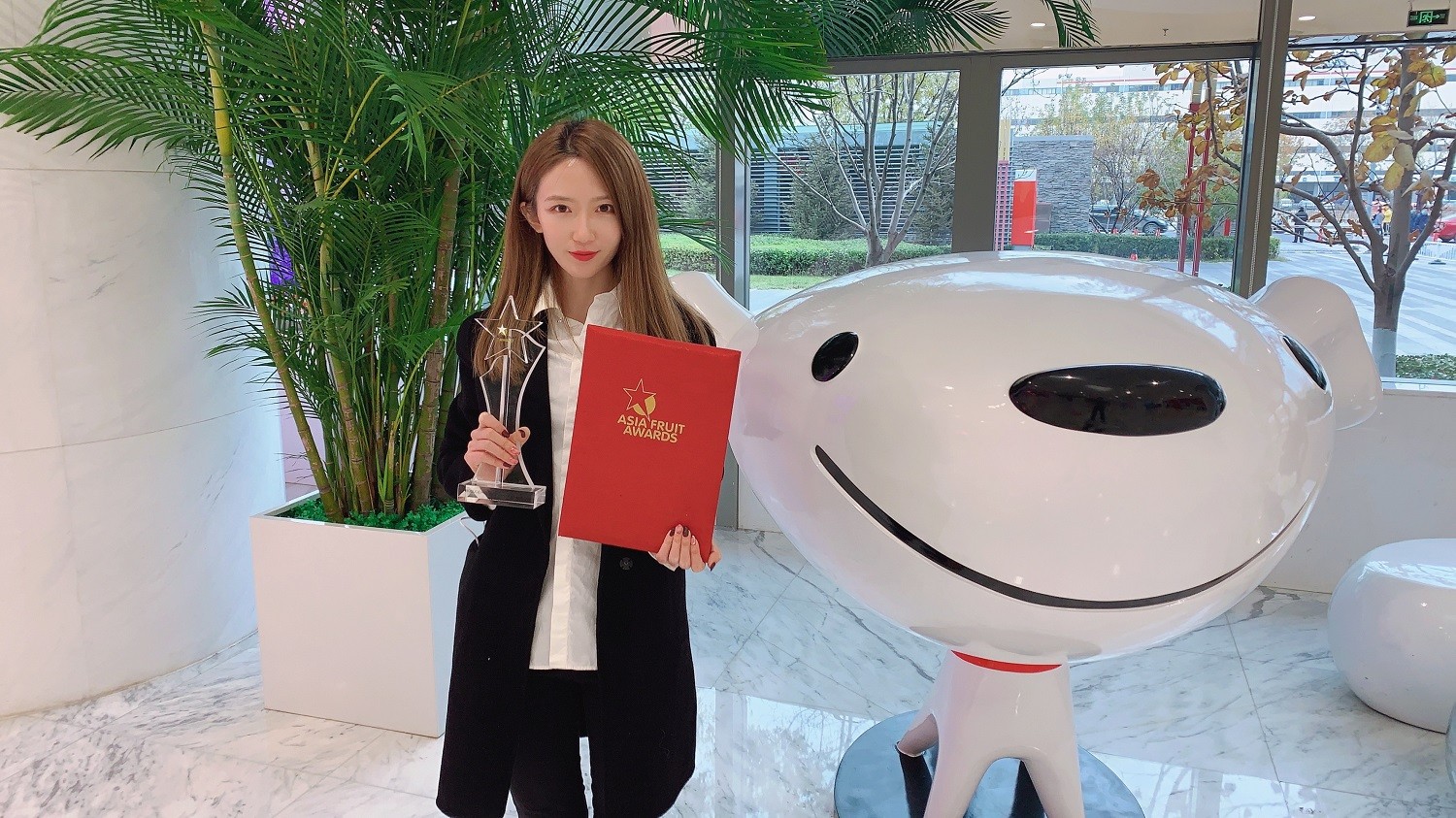 The Impact Award was presented to experienced Asia produce executive Noel Shield who has spent most of his 30-year career in Asia working in the fresh produce business, both as a retailer and a supplier.

Shield was recognised for his role in helping to advance the fresh produce business in Asia, especially in terms of supermarket development and brand marketing.

While head of fresh produce at Hong Kong supermarket chain ParknShop in the late 1990s, Shield helped to pioneer the introduction of elements of the wet market into the supermarket store, Hey noted. The complex operation created a breakthrough for modern food retail in terms of capturing fresh food sales in Hong Kong. He also worked with Capespan’s Asia affiliate, Metspan Hong Kong, to implement ‘active selling’ of branded fresh produce in-store with teams of merchandisers.

In 2006, Shield relocated to Thailand where he was appointed president of produce for Tops/Central Food Retail. The group’s high-end Central Food Halls gained global recognition for their premium fresh food and produce departments. Shield was instrumental in setting up Central Food’s direct sourcing of imported fruits to streamline the supply chain and improve the retailer’s range and offering. He helped to drive the growth of high-value categories in Thai retail such as cherries and strawberries.

Outside retail, Shield worked with Metspan Hong Kong in the mid-2000s. He later helped to create JWM Asia in 2017, a joint venture between Capespan and Joy Wing Mau, enabling the Chinese group to develop its pan-Asia presence and expanding sales channels in Asia for Capespan suppliers. As CEO of JWM Asia Holdings, Shield led a campaign to launch Outspan Gems, Capespan’s soft citrus brand, in Asian markets in 2018. Most recently, as chief executive of JWM Asia Holdings, Shield restructured JWM Asia Japan (formerly Capespan Japan), paving the way for its sale to Farmind, where he remains an operational consultant to the Japanese company.

“It’s been my good fortune and privilege to have been actively involved in the fruit industry across Asia for the past 30 years,” Shield reflected. “During this time, I have seen many changes, especially in the development of the retail sector, the expansion of China into a fruit powerhouse, the growth of new products and the change in consumer demand to quality and taste.”

“To receive the Asia Fruit Impact Award is extremely humbling and it’s something that I share with the many talented people I have had the pleasure of working alongside during my time in Asia.” 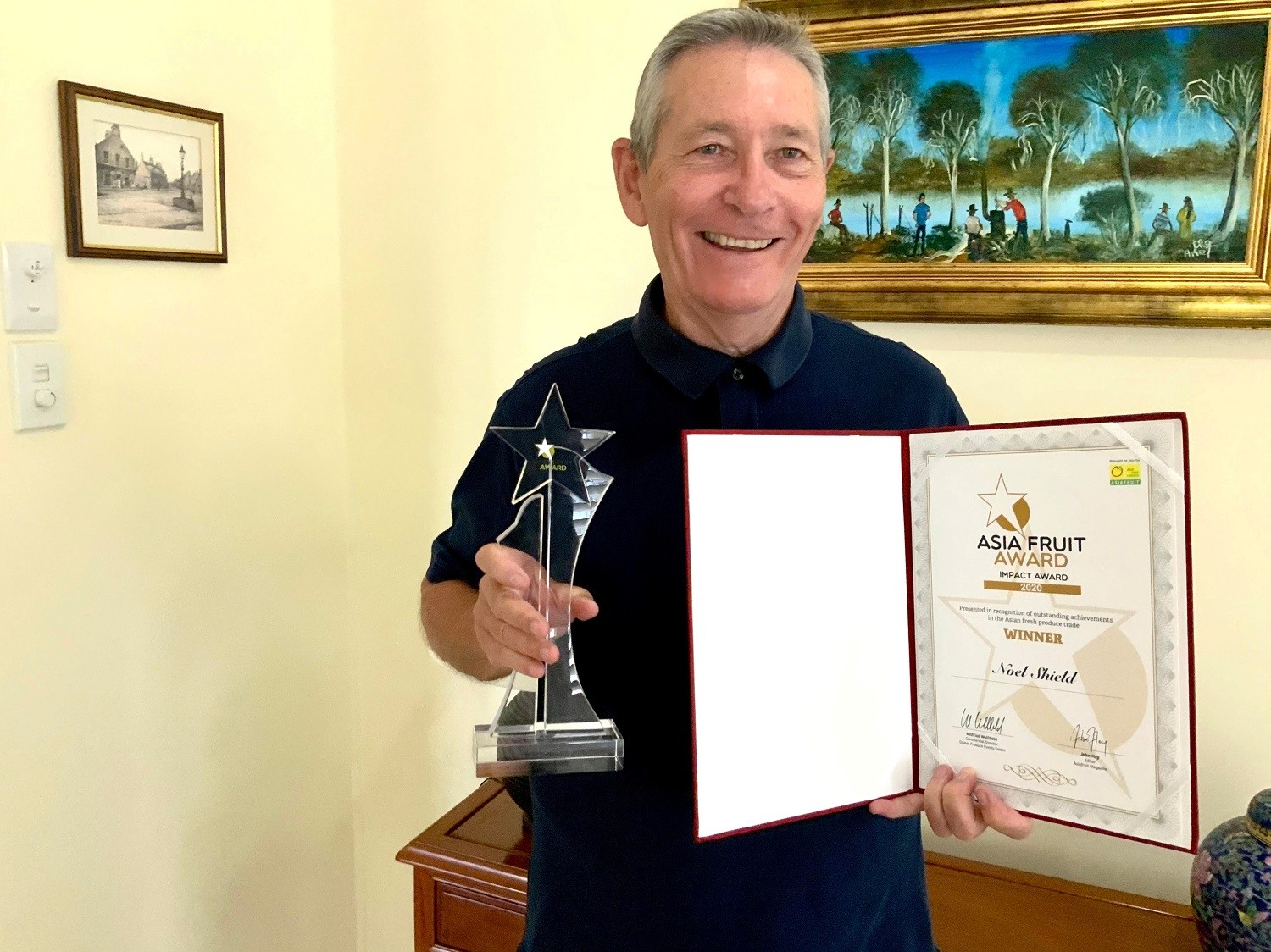 “We warmly congratulate our four fantastic ASIA FRUIT AWARD winners,” said White. “These awards set a standard for everyone in the business, and our winners are to be commended on their remarkable achievements. We wish them every success in the future as they continue to innovate and drive the business forward.”