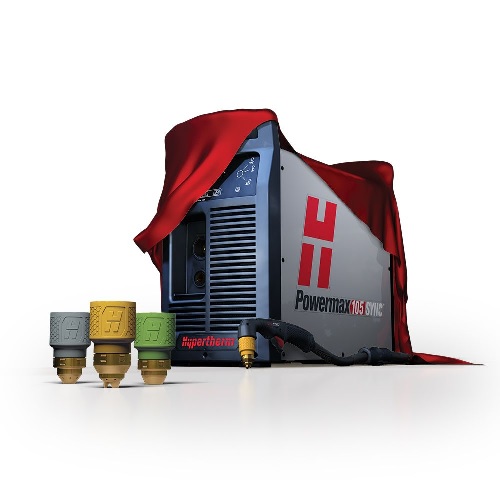 Hypertherm, a U.S. based manufacturer of industrial cutting systems and software, announced three new air plasma systems called Powermax SYNC. Featuring built-in intelligence and a revolutionary single-piece cartridge consumable, this next generation of Powermax65/85/105 systems, is unlike any other plasma in the world.

Powermax SYNC and its SmartSYNC torch replaces the traditional five-piece consumable stack-up with a single color-coded cartridge. Technology embedded in each cartridge automatically sets the correct amperage, air pressure, and operating mode and lets operators know when a new cartridge is needed. Additionally, controls on the SmartSYNC torch allow operators to adjust the amperage and change the cartridge without returning to the power supply.

The cartridge is manufactured as a single piece so everything within it is perfectly aligned and optimized. As a result, the Hypertherm cartridge for Powermax® systems will last up to twice as long and deliver cleaner cuts versus traditional consumables. The cartridge can even track data, like starts and arc-on time, to identify trends and make a user’s operation more efficient.

“The Powermax SYNC series delivers incredible ease of use, a lower operating cost, and better performance than any other air plasma before it,” said Erik Brine, General Manager of Hypertherm’s Powermax team. “We are excited to introduce what is truly a groundbreaking new product to the fabrication industry. This simplified operation serves to help fabricators address many of the toughest challenges they face today by eliminating operator errors, downtime, troubleshooting, waste, and training time, while offering the same industry leading reliability all Powermax systems are known for.”

In keeping with Hypertherm’s commitment to offer technology updates to owners of its older plasma systems, Hypertherm engineers have developed an adapter for Duramax® and Duramax Lock torches. This will enable owners of the Powermax45 XP and Powermax65/85/105 to enjoy some benefits of the cartridge consumable platform, such as faster change-outs, easier ordering and inventory tracking, longer life, and improved cut quality.

The Powermax SYNC series was unveiled today at the 2021 FABTECH Show in Chicago. Hypertherm will begin shipping systems to partners in Asia, Australia, and New Zealand, as well as South and Central America on October 18. Global shipments begin on January 17. Please visit www.hypertherm.com to learn more about Powermax SYNC and watch the unveiling event.