There are repeated bursts of noise from outside the office window when trucks piled high with full crates of beer trundle off on their journey to their customers. OeTTINGER Brewery still delivers most of its products – from beer through mixed beer beverages to soda pop – directly to supermarkets without using any intermediaries. The fleet now numbers about 120 vehicles. “Our motto is ‘consistently simple’. At OeTTINGER, it’s all about beer. We do without marketing and sponsoring and with this strategy have steadily grown on the market,” smiles Jürgen Brunacker, technical plant manager for OeTTINGER at the brewery site in Mönchengladbach. He goes on to emphasize, “With respect to filling technology, we’ve always been something of a technological pioneer and right up to the minute.” 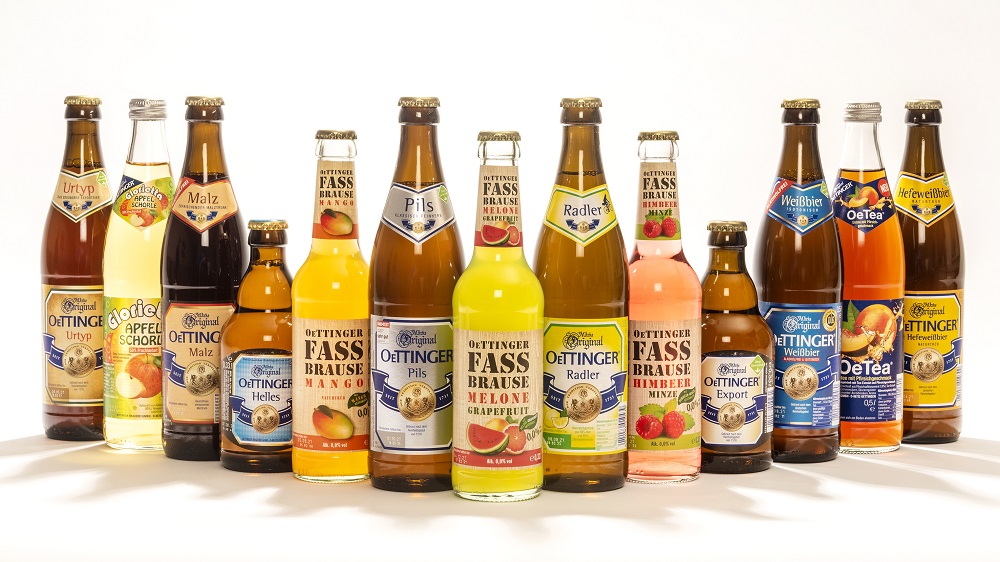 OeTTINGER has over 40 beverages in its portfolio, with the main focus on beer. (Photo: OeTTINGER)

KHS has been a partner to the company for several decades, helping it to implement its strategy and playing a big part in its success.In 1989, for instance, OeTTINGER commissioned a new production site in Bavaria. The first filler was supplied by KHS – then still operating under the name of Holstein & Kappert. “The investment back then was a clever move,” confirms Brunacker. The machine is still in operation, its long service life nothing less than convincing. 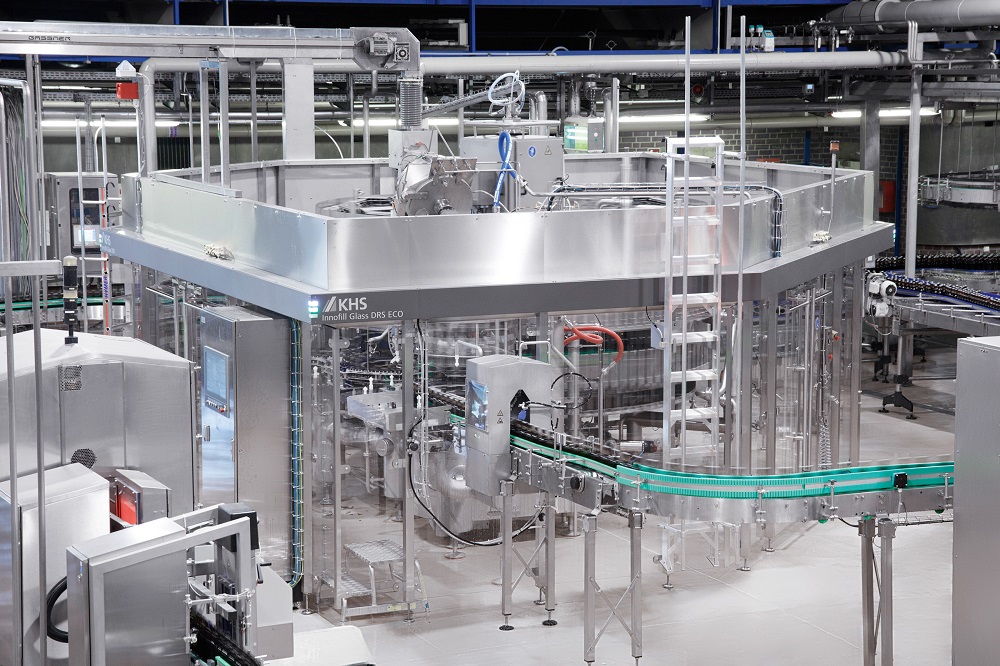 KHS first presented the Innofill Glass DRS ECO to the public in 2019; by the spring of 2021, the bottle filler was up and running at OeTTINGER Brewery. (Photo: KHS)

For the trained master brewer, the brewery has always played a big role in his life since childhood. Visits to his father’s place of work in Oettingen in Bavaria were a common occurrence, as the plant manager remembers. “I was often in the production shop even as a little boy.” He now works in Mönchengladbach in the north of Germany and talks about the long and successful cooperation between his company and KHS. The filling technology is still compelling, he says. “You know what you’re getting. Fillers are one of KHS’ core areas of expertise.” Just how great the trust in the mechanical engineering company's technology is was demonstrated last year, when OeTTINGER invested in the first Innofill Glass DRS ECO on the market – another excellent decision, according to brewing expert Brunacker. “The machine ran at full capacity right from day one,” he smiles.

Mike Herrmann, the KHS sales representative responsible for OeTTINGER, backs this up. “The technology is extraordinary. To achieve a level of reliability as high as this in such a short implementation period merely underlines the high quality bottlers profit from here.” He has also had close ties to the brewery for 18 years – and thus for much of his professional career. Herrmann and Brunacker are not the only people who know each other well. “The bond between our employees and those at KHS is unusually strong,” says the plant manager. This proved to be extremely conducive to the fast commissioning of the bottle filler. The schedule was challenging but successfully kept to thanks to the companies’ good cooperation. Just six months passed from offer preparation to the first filled beer bottles rolling off the line – at a current rate of up to 40,000 per hour, depending on the size and container design. The decision to buy was quickly reached in the fall of 2020. OeTTINGER compared offers and systems from various manufacturers and ultimately again invested in technology made by KHS. “The total package simply added up. The calculation of the total cost with respect to the lower use of media and resources had us convinced,” Brunacker claims. 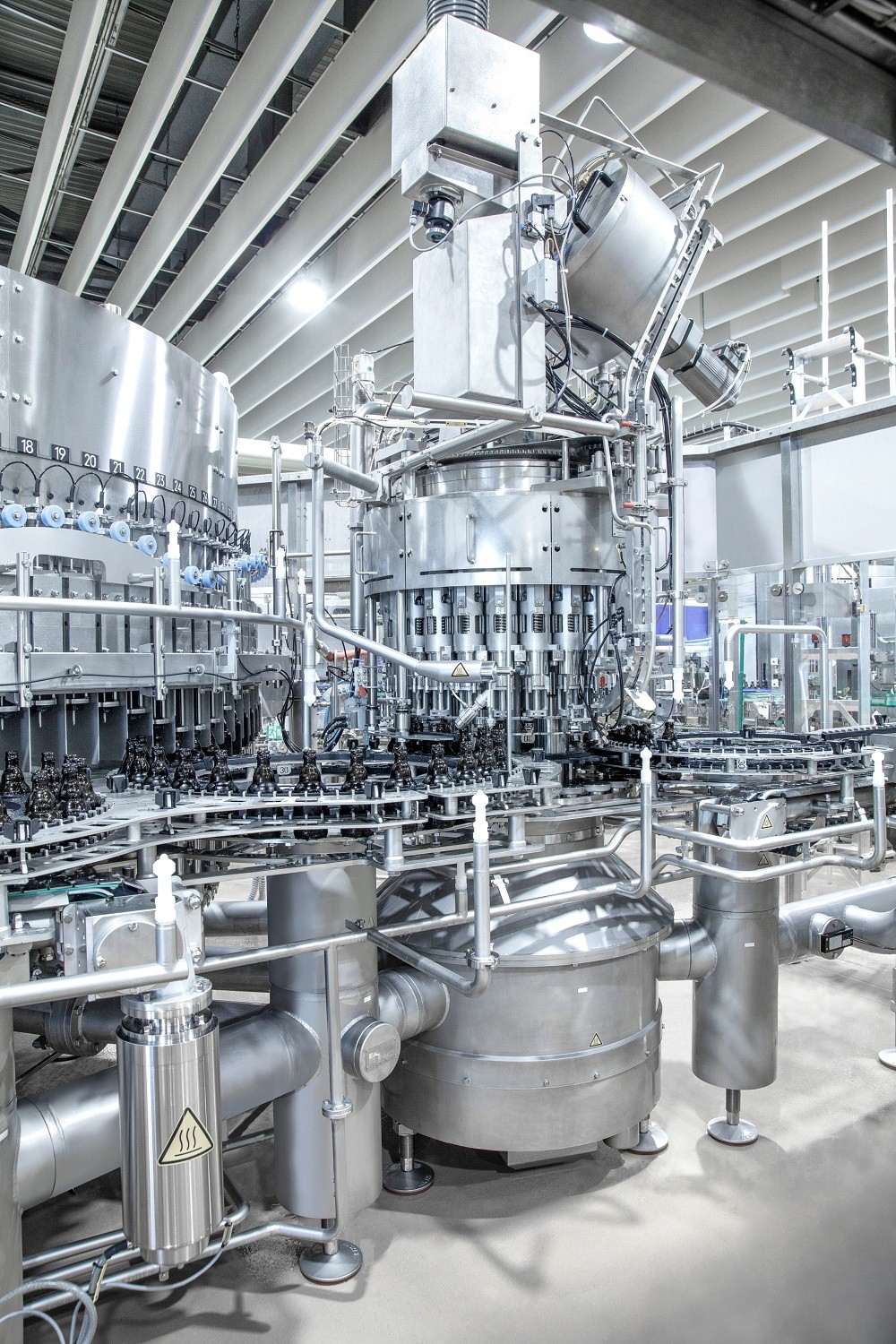 For a total oxygen pickup of 20 ppb the Innofill Glass DRS ECO only uses 160 grams of carbon dioxide per hectoliter of beverage. This is unique when measured against competitor equipment. (Photo: KHS)

For a total oxygen pickup of 20 ppb[1] the Innofill Glass DRS ECO only uses 160 grams of carbon dioxide per hectoliter of beverage. This is unique when measured against competitor equipment. For a value of 40 ppb 110 grams of CO2 per hectoliter are needed and thus up to 60% less than in direct market comparison. The Innofill Glass DRS ECO can be tailored to cater for the individual criteria of different beer styles. “We adjust the filling process to suit our customers’ products. Because of the shorter processing time, we’re not getting any bigger with our bottle filling machine,” Herrmann states.

Lots of breweries have to buy in their carbon dioxide. Due to rising prices, this is a growing cost factor. “The lower the consumption for the filled bottle, the more efficient the production process,” Brunacker tells us. “And the lower the oxygen pickup, the better the product quality. The concordance between these two points on this filler is phenomenal.” The high-pressure injection unit acts as a support here, monitored by camera technology directly upstream of the container closure system. It causes foaming that displaces even the tiniest amounts of air from the bottle neck and under the domed crown cork. Too much oxygen pickup during filling damages the beer. It starts to oxidize and the taste changes. “The new KHS filler has such low oxygen filling that product spoiling caused by the machine is practically eradicated. There hasn’t been anything quite like this in bottle filling before,” Herrmann says.

Thanks to the frequency-controlled vacuum pump and ECO process the brewery also saves up to 20% in energy and water. The vacuum pump cooling water passes through a heat exchanger and is then used for the bottle spray. To date these were separate processes that each needed their own respective media.

Besides profiting from the quality of the filling, OeTTINGER enjoys benefits in other areas, too. Brunacker praises the machine’s compact design, for example. “The new glass filler was perfectly integrated into the line. This was an unbeatable advantage.” Automated and digitalized processes also make production considerably more efficient and reliable. The DIAS diagnostic assistance system, for instance, monitors the entire filling sequence. Summaries of the operating data and consumption values can be easily generated. Operators can quickly intervene and make any corrections that might be necessary. In addition, individual alarm thresholds can be configured in advance. “We can set up the machine so that it always produces the same values. This gives us a number of advantages with regard to quality management and product safety,” Brunacker says. The system also consistently recognizes bottle breakages in good time, thus further contributing to the issue of product safety. With improved broken glass protection and a bottle burst monitoring system splinters of glass can be perfectly isolated, unlike on the old system. “Our demand for quality is high. This machine helps us to achieve our goals,” the expert brewer commends.

Standard deviation of less than one millimeter

The camera-controlled high-pressure injection control system known as OPTICAM is a further strong selling point. It enables the head of foam to be automatically monitored and regulated without the need for a machine operator. According to Herrmann, the deviation in filling accuracy is less than one millimeter. Here, automatic fill level probes enable infinitely variable adjustment of the fill levels for the different bottle shapes and sizes. This not only cuts down on beer loss but also reduces the amount of effort required for cleaning, as Brunacker remarks. “After filling the bottle has to be rinsed off with water. The less beer foam it has, the easier it is to remove any product residue.”

Digitalization and automation clearly synchronize the filling processes at OeTTINGER and thus boost efficiency. “The laboratory values were already outstanding in market comparison – and then proved to be even better in reality. Compared to consumption values on earlier machines, this is yet another quantum leap. You won’t find this is any textbook,” says Brunacker, who also appreciates the ease of operation. “Our personnel were able to manage the night shift on their own within a very short time indeed without a KHS engineer being on site, as is usual when new machines are commissioned.” Product changeovers are also faster. The automatic CIP caps no longer have to be attached or removed by hand and automatically drain themselves. Switching from beer to a mixed beer beverage or one of the over 40 other beverages in the OeTTINGER range is quick and easy. This means that not just the bottles but also the crates are filled at speed that then rattle past Brunacker’s office window on their way to the consumer.

[1] ppb = parts per billion. 1 ppb is the equivalent of 1 µg per kilogram, for example.