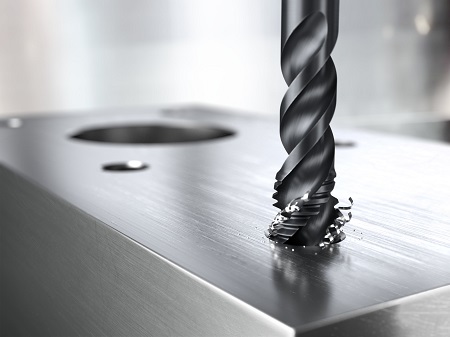 Part of Sandvik Coromant's solid round tools offering, the CoroTap range delivers material-specific solutions for threading a variety of metals. In particular, the CoroTap T200 and T300 are optimized for ISO P1 and P2 steel workpiece materials, making them suitable for machining components in the automotive and general engineering industries. This includes crank shafts, steering knuckles, and general engineering components such as housings and flanges. Both tools are suitable for mass production.

The CoroTap T200 has a spiral point, while the T300 is a spiral flute tap. While the spiral point of the T200 is suited for machining through holes, where chips are pushed forwards, the T300 is catered to blind holes, where there is no exit hole and chips must be pulled backwards. As part of the  upgrade, both tools have a new surface treatment, as well as improved edge rounding for better finishing inside the machined hole. An improved flute form also offers better overall performance.

As a result of these upgrades, manufacturers will benefit from improved process security with increased resistance to edge chipping, leading to fewer tool breakages and an improved quality of the machined thread. In addition, cutting speeds are higher than previous versions of the tool and there is an overall reduction in the cost per part.

Another major difference compared to previous versions of the CoroTap range is the improved CoroTap T200 and T300 can benefit from Sandvik Coromant's Tailor Made web assortment. Serving the industry with tailored manufacturing tools, the Tailor Made service gives customers the freedom to specify their own dimensions, without paying for a specialist tool. The taps can be adjusted to meet the demands of multiple industries and are adaptable to specific requirements.

"Performance case data demonstrates significant improvement for the tools," explains Lisa Belfrage, Global Product Manager at Sandvik Coromant. “In fact, a comparison of the new and existing T200 tap demonstrates a 121% increase in tool life, with the potential to machine over double the number of threaded holes using a single tool. Productivity is also increased with the upgraded T200 — with cutting speeds increasing from 18 metres per minute (m/min) to 24 m/min with machining P2 steel.

"With demonstrated process improvements, and the ability to offer tool customisation with the Tailor Made service, the new generations of the CoroTap tools will make thread cutting faster and more efficient for our customers".

To learn more about the upgraded CoroTap® T200 and T300 tools, visit the Sandvik Coromant website.