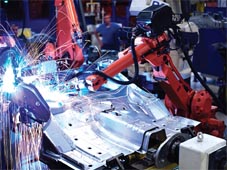 Laser welding is technique used to weld pieces of metal together. It uses a laser beam as a heat source, which limits the heat to small areas and raises the speed of both the heating and cooling processes. Laser welding is often used to make cars, airplanes and spacecraft. The laser beam used in laser welding is very thin and very concentrated. It forms when a medium is excited and emits photons. Laser beams can be either continuous or pulsed. Continuous laser systems are used for very deep welding, whereas pulses that last only milliseconds are used to weld very thin materials together. There are two types of lasers used in the laser welding process: solid state lasers and gas lasers. Solid state lasers use solid media, such as synthetic ruby and crystal, to form the laser beam. Gas lasers use gaseous media, such as helium, nitrogen and carbon dioxide to form the laser beam. Solid state lasers operate on much shorter wavelength than gas lasers, but they have much lower power outputs. Laser welding of steels Low-carbon steels are readily laser weldable provided that sulphur and phosphorus levels are kept below 0.04%. A higher content can promote solidification cracking. In low-carbon steel the welding zone is martensitic and exhibits increased hardness, the level of which depends upon carbon and alloying elements contents. The structure of the heat-affected zone depends upon initial material state. In the case of annealed (normalised) condition there is fine martensite in the place of former pearlite grains and conserved ferrite colonies, appearing as if austenite transformation occurs separately in these two locations. This is due to the typically short thermal cycle of laser welding and lack of time for carbon diffusion to occur throughout the whole material. However, time is enough for carbon redistribution to proceed in pearlite that results in martensite formation with eutectoid carbon content upon cooling. The heat-affected zone in steel after standard heat treatment (quenching and tempering) consists of two areas: a re-quenching zone and a tempering zone. In the first area tempered martensite undergoes reverse martensite transformation when heating up and martensite transformation upon cooling that result in increased hardness. In the tempering zone, temperature is not high enough for austenisation, and additional tempering proceeds. Stainless steel Austenitic stainless steels are good candidates for laser welding if their sulphur and phosphor contents are kept low. Specific laser beam welding features, such as high-welding speed, small heat-affected zone, and low material exposure at elevated temperatures are beneficial for welding this type of steel, because prolonged periods at high temperatures may lead to chromium precipitation on grain boundaries and reduction of corrosion resistance. Martensitic stainless steels produce relatively brittle welds due to their high carbon content. To avoid cracking, the same measures used for high carbon steels may be performed; pre-heating and use of filler material (in particular, austenitic wire or powder). Nickel alloys Nickel and its alloys are widely used in industry due to their corrosion, heat, and creep resistance. There are two major types of nickel alloys, solid solution and precipitation. The solid solution type is readily weldable with conventional methods as well as with laser welding. Alabama Laser has welded a number of corrosion probes made of solid-solution-type alloys (Monel 400, Inconel 600, 825) as well as heat exchanger fin assemblies of Monel 400. The precipitation-hardenable type is generally difficult to weld due to cracking. Strain-age cracking can occur under some combinations of temperature and stresses in the heat-affected zone during or after welding. Alloys of the Nb-Al-Ti system are generally less susceptible to this type of cracking. Some tips oAir Jordan XI 11 Shoes