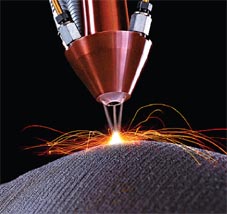 The present use of laser welding is rooted in the scientific discovery of the first laser in the 1960s, when the effects of an amplified light beam forced by radiation emission were put into practice. The working principle behind laser welding actually lies in the emission generated at the meeting point between light and metal, with the latter emitting force radiation. Presently, laser welding is expanding in various domains of activity since it brings enormous advantages with it such as a very deep weld penetration and minimal levels of heat inputs that cannot be achieved with traditional welding technologies. The energy transfer is the one that makes the difference between classical welding and laser welding in various domains of activity. We can talk about two elements that characterise the efficiency of laser welding; first of the entire heat ratio required by a specific workpiece and then the melting power in the fusion area. Furthermore, laser welding does not depend on AC or DC outputs and it is not limited by the conductive property of a specific material. The contact and fus ion a r e pos s ibl e with almost any material without even creating x-rays or requiring the formation of a vacuum.The working principle in laser welding is the energy of light; hence the results are almost impeccable with a welded joint that has highly superior resistant properties. The penetration of a metal piece is directly influenced by its physical properties like conductivity, thickness or density; when a concentrated beam of energy is applied to a workpiece, the melting is immediate before heat may affect the operational area as such. The force of the energy beam in a focal point is given by the careful choice of special lenses. Correct mirror and lens applications in laser welding may guarantee the concentration of the light beam on spots smaller that 0.005.The main industries to profit from the use of laser welding are aerospace building, military and defense, medical research, instrumentation, electronics and so on. Laser welding actually improved the execution of many delicate works that were almost impossible to achieve before, and here we refer to the creation of very deep or narrow welds and the absence of any distortions in the process. Small or very thin items could not be joined very well before the development of laser welding, not to mention that the resistance of the welds is incredible as compared to those resulted from classical welding procedures.(the end)Air Jordan XI 11 Wool