Quick cutting results in one step 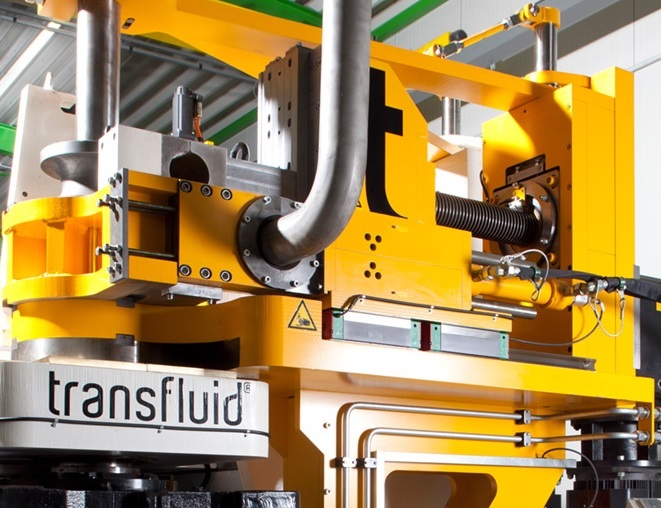 The complexity of processing increases during chaotic production, while the achieved complete results are at the same time efficient and fast.

Streamline operations are particularly required in such cases, in which a product cannot be installed until several components are available. This was the reason why in a recent project, transfluid developed a system solution for the efficient production of a complete exhaust manifold made of 4 or 6 different stainless steel tubes.

For this purpose, a 6-meter long tube is first loaded onto the tube-bending machine. Each individual tube is fitted with up to 4 bends. After the bending process, the tube is cut, chip-free, on the bending machine directly using a blade cutting process and is then inserted by robot into the corresponding forming machine. It forms an asymmetric geometry, which fits each individual bend progression. After processing, the components are then fed directly into a welding cell. It welds the tubes to flanges. This way, one complete module is always available as a unit.
Chaotic production for improved operations
As in this case, complete tube sets are in part used during tube processing. It gets more complicated and demanding when dealing with a wider range of tube sizes and geometries. The experts at transfluid have developed special automation systems, that allow a chaotic production to be implemented as an especially efficient solution.
"This kind of production comes very close to a "one piece flow", thus significantly reducing the time period from tube production to installation." explains Stefanie Flaeper, CEO at transfluid. "It is in any event the most effective solution. And it is also the solution that can significantly streamline operations despite an increase in complexity. We have already implemented this successfully for several customers."
More flexible to better results
Often, a higher degree of complexity is needed for hydraulic systems during production. "Here, our customers frequently want to produce a complete piping kit, which consists of up to 8 nominal widths as a unit, for example", explains Stefanie Flaeper. In these cases, the machine setup is somewhat more complex. However, it offers several distinct benefits as compared to conventional tube production, during which in part a significant number of tubes have to be produced one after another, which are then combined to a single tube set. Here, machine set-up is not required, production is time optimized and there is almost no need for warehousing and commissioning areas.
For production of this kind, transfluid integrates chipless cutting systems, forming machines or cutting ring pre-assembly systems and bending machines into the thus optimized process. These systems can be linked with one another, thus allowing monitoring from the outside, creating processes as early as during machine set-up and can thus be utilized in Industry 4.0-capable processes. This way, the transfluid automation systems allow an exceptionally efficient chaotic production, after which a completely produced component is available after each work cycle.
odziez