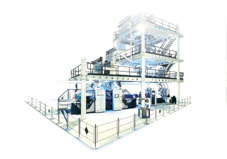 To produce blown film, the plasticmelt is discharged through an annular die and then inflated by air to form the film. In the process, the tubular film undergoes intense cooling in the formation zone (region between the die exit and frost line). Here, a heat transfer occurs primarily via convection cooling, i.e. heat is transferred from the film to the surrounding air. In this region, heat transfer via contact cooling plays almost no role; heat loss via radiation cooling can also be neglected in a first approximation. In addition to the different cooling mechanisms, there is a significant difference in cooling in terms of the inner and outer circumferential surfaces. A distinction must be drawn between exterior and interior cooling.

The single-orifice air ring is the oldest method employed for cooling the tubular film. Usually, such an air ring distributes a stream of cool air uniformly around the circumference by discharging the cool air in the direction of extrusion through an annular orifice and over the external surface of the bubble. Today, dual-orifice air rings for external cooling of the blown film are considered the state-of-the-art. In the air ring, the air exiting from the upper orifice is discharged at a higher mean velocity than the air from the lower orifice. At the same time, the Venturi effect assures that the bubble conforms to the shape of the air ring, causing the mean velocity of the air to increase and thereby improving heat transfer.

"Output is limited not only by extruder capacity today, but also by the stability of the film bubble and the ability to cool the film in the shortest possible distance."

Regardless of the cooling ring design, the stream of air exiting from the cooling ring in the discharge direction slows in the vicinity of the bubble and its temperature increases continuously. As a consequence, the cooling capacity of the air stream decreases with increasing distance, i.e. height of the blown film. 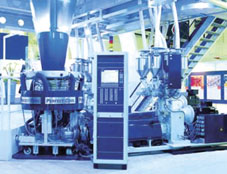 Water instead of air

In the past, there were many attempts to overcome the limitations of conventional methods for cooling the bubble. One potentially successful approach is to improve the cooling action through use of water. The attraction of water as a cooling agent compared to air becomes obvious upon considering the thermal characteristics of thNike Air VaporMax 2019