Brückner Maschinenbau teams up along the value chain

From bilateral teamwork with raw material suppliers, masterbatch specialists and film producers to more complex cooperations along the value chain: Brückner is involved at many levels.

DOW and Brückner are jointly developing BOPE-LLD and BOPE-HD resins and films as well as barrier solutions for BOPE (biaxially oriented polyethylene). All three fields of applications have been tested at Brückner in the lab-scale using the laboratory stretcher KARO 5.0 ® as platform for film developments as well as on the pilot line and successfully transferred to a production line.

The successful outcome of the cooperation with SABIC is a new BOPE-LLD material. Same procedure is now ongoing for BOPE-HD resins. During the latest cooperation Brückner also tested SABIC’s certified circular BOPP material (which incorporates recycled content) in their own technology center as a drop-in solution for biax-film applications.

NOVA Chemicals has been working with Brückner to accelerate the development and commercialization of a new high-density resin technology for the BOPE market. Besides BOPE-HD, Nova offers also BOPE-LLD grades. In a common project with NOVA, the film producer Polivouga and Brückner, a full BOPE-pouch consisting of BOPE-HD for the stiff base film and BOPE-LLD as sealing web will be presented to the market.

The optimisation of polymers, masterbatches and process parameters necessary for innovative BOPE films was carried out by CONSTAB engineers on theBrückner pilot plant. One example is white opaque BOPE film: By combining two innovative additive masterbatches, excellent density values of 0.5 g/cm³ to 0.7 g/cm³ were achieved, while at the same time providing very good stiffness. 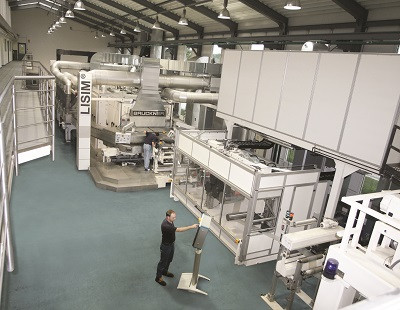 In the “Circular Alliance” six companies teamed up to produce new high barrier mono material flexible packaging solutions designed for recyclability. The partners include Dow, a resin supplier, for the first step in the production chain, Brückner Maschinenbau for the production of the biaxial stretched polypropylene and polyolefin-based films, Hosokawa Alpine for the production of MDO LDPE, ELBA to convert the finished film rolls into pouches, Constantia Flexibles to produce metallized high barrier stand-up pouches and finally Bobst with their high barrier, printing & lamination competence.

The project has involved using different high barrier mono-material structures, each one thoroughly tested to guarantee that all industry requirements were met in terms of processability, barrier, safety and optical quality. The different types of mono-material stand-up pouches (MDPE, BOPE, BOPP and CPP) are the outcome of considerable investment and intense research by each of the partners.

In March 2019 a value chain project initiative was launched by a group of companies under the acronym PRINTCYC (Printed PP films for mechanical recycling) to research and test ways to create circular economy solutions basing on post-industrial waste. Members of PRINTCYC: The machine suppliers Brückner Maschinenbau, Kiefel and PackSys Global, the film producer Profol, the ink manufacturers Huber Group and Siegwerk, the converters Constantia Flexibles and Wipak as well as the recycling specialist Erema. The initiative is coordinated by akk innovation, an independent start-up company for sustainable innovation management in the plastics packaging industry. The specific target of the first two project phases was to understand the impact of different ink formulations on the mechanical PP and PE recycling process. Furthermore, the re-usability of PP and PE recyclates (rPP / rPE) made from printed post-industrial film waste was evaluated in cast film, blown film, compression moulding and thermoforming technologies as well as the biaxial stretching process.

R-Cycle is the open and globally usable tracing standard along the life cycle of plastic packaging. The overall goal is to implement a practical solution, ensuring recyclability by seamless documentation of all recycling-relevant packaging properties based on established technologies. In the recycling process, packaging can thus be precisely identified in order to process the resulting recyclate into diverse and high-quality plastic products. Partners in this project are: Arburg, Kautex Maschinenbau, Reifenhäuser, Brückner Maschinenbau, the Institute for Plastics Processing (IKV) and GS1 Germany.

Last but not least and quite up-to-date, Brückner Maschinenbau researched and developed extensively in close collaboration with two long-standing customers in the direction of BOPE: With Bulgarian Plastchim-T and Portuguese Polivouga, two of Europe’s top film manufacturers, Brückner has been doing numerous joint trials at Brückner’s technology center in Germany and the customers’ production sites. Both film manufacturers then consequently took the next step: Each of them ordered an ultra-flexible BOPP/BOPE hybrid line for an extended range of films. Both lines will be in operation by the second half of the year 2021.