Having demonstrated a prototype of a new, general-purpose 5-axis robot (the Success 22X) at the K 2019 trade fair, Sepro Group has now finished the redesign of the entire range, which can serve injection-moulding machines from 20 to 700 tonnes. Three of the units can be optionally equipped with a 2-axis servo wrist co-developed with Yaskawa Motoman, to create a 5-axis Cartesian design that brings both flexibility and economy to the market.

In addition to aesthetic changes, including sleek, streamlined styling, the latest Success robots have an extended standard demoulding stroke and, for the first time, a long-demoulding (LD) configuration is available that adds 200mm to the stroke. In certain applications, this can allow a robot of a given size to serve a higher-tonnage molding machine than previously possible.

In some models, the maximum horizontal stroke has been lengthened, and a telescoping vertical arm is also available to extend that movement by as much as 200mm.

Sepro engineers also have returned to the use of cam follower bearings for linear motions of the new Success robots. Developed and patented by Sepro some years ago to handle the heavy payloads and long strokes on the large robots, they are now standard on all Cartesian robots. This technology provides more even weight distribution and smoother operation compared to linear bearings and also is more tolerant of dust and other contaminants. 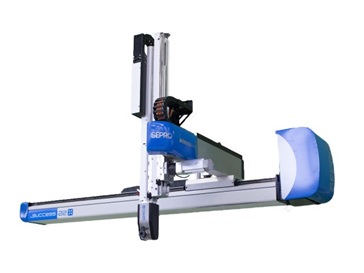 As noted above, the three largest robots in the Success Range (covering IMMs from 80 to 700 tonnes) are available in a 5-axis-servo ‘X’ configuration that adds speed, flexibility and user-friendliness compared to 3-axis robots with pneumatic wrists.

The full-servo wrist on Success Line X robots is a feature previously found only on more technological robots, including the Sepro 5X Line of small and mid-size robots, and 7X Line of large robots, both of which feature a 2-axis servo wrist developed in partnership with Stäubli Robotics. The all-servo wrist can be easily adapted with simple digital commands, guaranteeing greater flexibility and faster production changeovers -- approaching Single-Minute Exchange of Die (SMED) methodology – which Sepro belives as representing the future of Cartesian robots.”

Unlike pneumatic wrists, servo motors have positional sensors that allow the robot to know exactly where the wrist – and gripper mounted to it -- are positioned at all times. In fact, the robot can move in all 5 axes at any time with complete control. This allows the robot to complete complicated motions. Thus, it becomes easier to extract a large, complex part with minimal clearance between mold halve or tie bars, or to position parts for secondary operations. At the same time, it becomes possible to use simpler end-of-arm tooling (EOAT), since the servo wrist more easily compensates for minor misalignments.

Many of these complex part-manipulation tasks have historically been assigned to 6-axis articulated-arm robots. However, because they are a Cartesian or linear robots, the 5-axis Success X robots offer faster intervention into the mold space for shorter cycle times, while delivering the flexibility inside and outside the mold otherwise associated with an articulated unit. Set-up and operation are highly intuitive and programming was designed to fit the unique needs of injection moulding.