Pilipinas Shell has partnered with Green Antz Builders to build a retail station in Plaridel, Bulacan using eco-bricks made from upcycled plastic waste – a first not only in the country, but for the Shell global group.

The past year has been all about accelerating our transformation to do better in our financial, social, and environmental dimensions, according to Pilipinas Shell Vice President and General Manager for Retail Randy Del Valle. “At Shell, we believe that this milestone station will not only help us reduce our carbon footprint and meet our ambition to reduce, reuse, recycle waste, but also set a precedent for smarter and cost-efficient station design,” Mr. Del Valle said.

The move is a first step in Shell’s journey to support a circular economy approach, which is based on the concept that things are designed to last longer and to be reused, repurposed or recycled.

The station was constructed using 26,512 eco-bricks supplied by Green Antz and upcycled 1,200 kgs. of plastic waste, which is equivalent to 80,000 lubricant bottles. Sourced from Green Antz’s Plaridel eco-brick hub, the materials were also gathered from various sources, including the waste management programs of the Malolos, Plaridel, Pulilan, Baliuag, and San Ildefonso local governments with the help of Plaridel’s chief eco-brick proponent Ms. Jocell Vistan.

The eco-bricks help initiate a circular economy that not only reduces the plastics reaching landfills, but also generates commercial value out of what was previously considered waste for businesses in Plaridel. 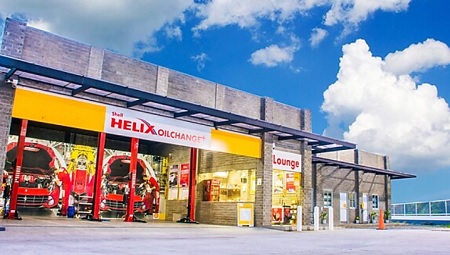 “We call it urban mining. Instead of getting all the resources from the environment, we just look around and source for plastic waste,” said Green Antz CEO Engr. Rommel Benig. “In fact, we’re not calling it waste, we’re calling it a resource.”  While the eco-brick is more expensive per unit compared to traditional brick, buildings that use this alternative can reduce the overall cost of construction and operation, said Mr. Benig.

Upcycled from plastic, glass and other debris, the eco-brick is more compact than conventional hollow blocks so less is needed for a build, and up to 5 times stronger. Moreover, the design also allows for greater insulation, which in the long run can drastically reduce energy consumption, resulting in lower financial costs and environmental impact.

Aside from this collaboration, Shell is also working with Green Antz through its social development arm, Pilipinas Shell Foundation, Inc. (PSFI) to set up an eco-brick manufacturing hub in Cagayan De Oro, helping manage waste in Macajalar Bay, while also providing members of the Macabalan Wharf Porters Association an additional source of livelihood.

“We're seeing a very good trend now. A lot of awareness is being created and more and more companies and organizations are really getting involved in this now. This was not the case five, six, or seven years ago. So, we are excited about the future, where everybody is more environmentally responsible,” said Mr. Benig. “We cannot do it alone, neither the government nor the private sectors. But if we combine forces, we have a very good fighting chance to address the problem.”

Shell is a leading member of the Alliance To End Plastic Waste, an alliance of global companies including chemicals and plastic manufacturers, consumer goods companies and waste management companies, along with the World Business Council for Sustainable Development. It has committed $1.5 billion over the next five years to end plastic waste in the environment.