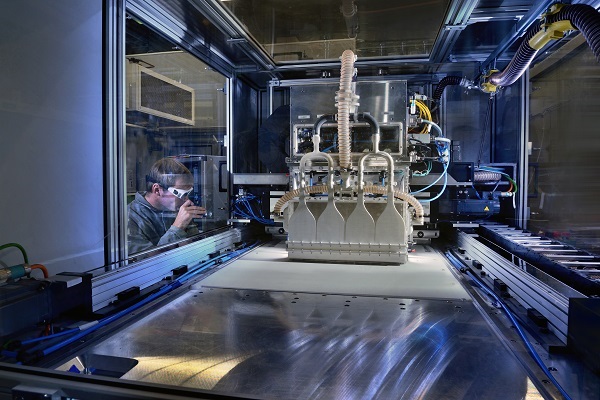 The new claim of the VDW (German Machine Tool Builders' Association) is "Innovate Manufacturing”. It is a clarion call to specialists all over the world to come to EMO Hannover from 18 to 23 September 2023. The World's Leading Trade Fair for Production Technology aims to provide visitors with inspiring new ideas for innovating their manufacturing – including new 3D metal printing solutions for series production.

Laser light flashes and creates a shiny silver circle in a gray powder bed. A skimmer brushes silently over the circle, which is now covered yet again with powder. And so, the laser transforms layer after layer of powder into a shaped component of high complexity. However, at present it takes 25 hours to transform titanium powder into a hat-sized structure for use by the aviation industry.

Anyone experiencing the 3D metal printing process for the first time is certain to be fascinated. Up to now, though, it has not only been the slow speed of the layering that stood in the way of series production, but also the lack of automation systems, digitalisation strategies and customised metal powders.

The Fraunhofer Institute for Laser Technology ILT in Aachen established the laser-based powder bed fusion (LPBF) process more than a quarter of a century ago. The invention was patented back in 1996 and its current importance is also down to its constant further development since then. This has resulted in the creation of a prototype machine in Aachen whose productivity was significantly increased by multiplying the number of laser beams. The system can print very large components of up to 800 by 1,000 millimetres, and with a thickness of up to 350 millimetres. There have therefore been some significant developments in 3D metal printing in the meantime.

A YouTube video shows the prototype at work. The gantry system prints a 300-millimetre-high Rolls-Royce turbine component with a diameter of 620 millimetres from stainless steel. “We work 'on-the-fly'. The process head moves while the lasers remelt the powder – practically eliminating all non-productive time,” explains Tim Lantzsch, head of the Process & Systems Engineering group at Fraunhofer ILT. "Cameras are used for process monitoring in order to visualise possible interactions between the laser beams and by-products. You can see how stable and homogeneous the process is.”

The component was the focus of the virtual conference of the ICTM International Centre for Turbomachinery Manufacturing Aachen in February 2022. But additive processes hold potential not only for aircraft engines and stationary turbomachinery for energy generation; the automotive industry is also strongly committed to the industrialisation of 3D metal printing. The German Federal Ministry of Education and Research (BMBF) has also recognised this and launched the Idam project (Industrialisation and Digitalisation of Additive Manufacturing) in 2019. A project team spearheaded by the Munich-based BMW Group was formed with experts from small and medium-sized enterprises (SMEs), large corporations and research institutions. The common goal of the 12 project partners: to revolutionise metallic 3D printing in the field of automotive series production.

The Idam project was a success, as the BMW press office reported in May 2022: “We have succeeded in industrialising and digitalising additive manufacturing (AM) for automotive production processes.” A digitally networked, fully automated 3D printing production line for automotive series production has been created at the BMW Group Additive Manufacturing Campus in Oberschleissheim. Another line is located at GKN Sinter Metals Engineering GmbH in Bonn. According to BMW, around 50,000 interchangeable and more than 10,000 individual and spare-part components can be manufactured cost-efficiently each year using the LPBF method. The recipe for success: the project participants has improved the entire process chain from the development and design of the 3D component, inline process monitoring and AI evaluation right to the digital twin.

The BMBF’s joint “Idea - Industrialisation of Digital Engineering and Additive Manufacturing” project is a partnership-based collaboration between several companies from a wide range of industries. By the end of October 2022, the consortium leader Siemens Energy AG from Berlin, and Toolcraft AG, an SME from Georgensgmünd near Nuremberg, are set to have built two automated additive production lines for metal components to be used in turbomachinery and aerospace applications. They are intended to show that not only large corporations but also SMEs can enjoy economic success with the additive production of individualised products in small batches. The interdisciplinary project team, which brought together turbomachinery engineering, software, automation, aircraft technology, laser, and 3D printing technology experts, has turned out to be a technology enabler.

How does the Idea project differ from Idam? “In contrast to the BMBF's Idam project, which focuses on automotive series production, Idea is all about turbomachinery and aerospace," explains Thomas Laag, a research associate at Fraunhofer ILT. "Automotive production is set up for high unit numbers and short cycle times, whereas the unit numbers here are lower. In addition, these are larger components whose cycle times are not as short and precise as those in the automotive industry.” Added to this are the very high safety standards of the aerospace industry. For example, manufacturers of aerospace components must hold a Nadcap (National Aerospace and Defense Contractors Accreditation Program) certificate – the aerospace industry's rigorous accreditation framework. Similar strict standards regarding precision, for example, also apply to the production of power generation turbines.

Quality assurance has therefore played an important role in the project. “Two of our top priorities are process certification and powder condition monitoring,” says Laag. The laser powder bed fusion (LPBF) process is also used here, and for it the Fraunhofer ILT developed a pulsed laser radiation process control which improves the detail resolution and results in fewer shape deviations. It also reduces the amount of post-processing and enables new, more efficient component geometries.

Another problem with additive processes such as laser powder bed fusion is component heating, which causes residual stresses and geometric component distortion. Support structures are used to dissipate the heat, but these then must be removed manually in a time-consuming process. Further processing of 3D printed components therefore requires many manual steps to compensate for geometric component distortion. It is also necessary to meet the extremely complex requirements of high-end industries, such as the aerospace sector, in terms of component specifications and the manufacturing process. These are typical challenges that are part of everyday life at toolcraft AG. The medium-sized company uses 3D metal printing for series production. It currently has 13 additive manufacturing systems in operation and works closely with well-known machine manufacturers.

But what impact did the BMBF Idea project have in Georgensgmünd? "We succeeded in incorporating the sub-processes more effectively in a complete manufacturing chain," explains Markus Langer, Head of Technology and Development Programs at toolcraft. In addition, the automation of previously manual work steps increased the process stability and quality. Another key factor in Idea was the digitalisation of work plans and work and inspection instructions. In combination with interactive training and VR goggles, this makes it easier for specialists in the metal-laser fusion centre to work on highly complex machines and manufacturing processes.

But how is Germany performing internationally in terms of 3D metal printing? Can it compete with other countries? “Unfortunately, the pace of the industrialisation of additive manufacturing in Germany is falling behind that of other industrialised nations such as China and the USA,” explains toolcraft CEO Christoph Hauck, regretfully. “These countries are pumping massive amounts of funding into the process, especially into its implementation in medium-sized companies. Unfortunately, Germany lost its leading position here quite some time ago.”

Dr.-Ing Jasmin Saewe, head of the Laser Powder Bed Fusion department at Fraunhofer ILT, is familiar with the international perspective from her involvement in many cross-border projects. Her views are clear: “Internationally, many countries are investing heavily in additive manufacturing and its industrialisation right now. It is crucial that we in Germany do not simply rely on our long-held pioneering position in additive manufacturing. Instead, we must continue researching into raising productivity and redouble our efforts to put the technology to industrial use to help industry face challenges such as supply bottlenecks.”