“UniteChem Group began producing industry-standard light stabilisers such as UniteChem LS944 in 1997 and has been continuously expanding its polymer additives portfolio ever since”, says Junyi Lin, CEO of UniteChem Group. “Today, we are proud to be among the world’s largest-capacity suppliers of light stabilisers and other plastic additives, offering over 40,000 tonnes of finished products. Our full backward integration with a production capacity of over 80,000 tonnes of intermediates provides extensive production flexibility, high reliability, and maximum quality control. Current production, located in two state-of-the-art production facilities in Jiangsu province, is now in process of being complimented with two new major production facilities in Jiangsu and Sichuan provinces, with completion in 2022/23.”

UniteChem LS2020 is a modern HALS (hindered amine light stabiliser) offering excellent anti-ageing properties in applications such as cross-linked polyethylene, olefin copolymers and other polymer materials. UniteChem LS119 is especially suited for use in polyethylene greenhouse film applications, polypropylene fibres, TPO automotive parts as well as other polymers such as EVA, EPDM, PA, PET and PMMA. With these product additions, UniteChem Group further enhances its commitment to offer customers the most up-to-date and value-added product portfolio. As Junyi Lin added: “The production of UniteChem LS2020 and LS119 is currently being methodically ramped up, with target capacities of 1,000 tonnes and 2,000 tonnes annually to meet global demand.” 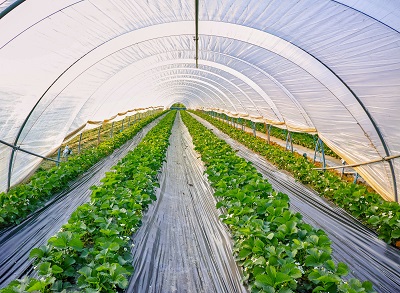 UniteChem LS119 is especially suited for use in PE greenhouse film applications.

As part of its commitment to invest in future solutions for its customers, UniteChem Group regularly allocates 5% of its total revenue to R&D, operating five independent laboratories – including its recently opened modern Shanghai R&D Center. Current efforts focus on expanding the group’s portfolio with high-demand UV Absorbers, NOR-HALS light stabilisers as well as other key polymer additives.

UniteChem Group, with global headquarters in Suqian City, Jiangsu province in China, is a leading high-performance light stabilisers for plastics in a wide range of demanding industrial applications. As one of China’s largest specialty chemicals companies, the Group has diversified activities in R&D, application development, production, sales, trading and machine manufacturing. It specialises in the production of light stabilisers, UV absorbers and other related products.

Early this year, the UniteChem Group announced major investments to further expand the availability of its technical support capabilities for customers in Europe and worldwide. As part of the company’s commitment to invest 5% of its total revenue in R&D, UniteChem has opened a second R&D and Innovation Center in Shanghai, complete with state-of-the-art testing, analysing and process evaluation equipment.

As stated by Mr. Lin, the Group is determined to take its expertise beyond China and meet the growing demands of global customers at all levels. The investment in its new second Shanghai R&D Center confirms this strategy and is a logical complementation of recent sales expansions, including a European warehouse in Antwerp, Belgium, and the recently opened sales office in Düsseldorf, Germany. 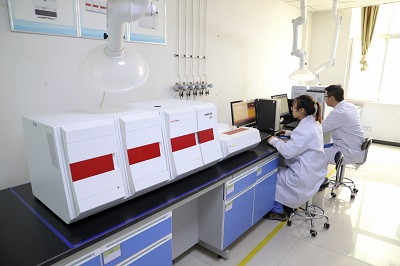 The new Shanghai Center provides extensive testing, analysing and process evaluation support for global polymer and masterbatch producers, major OEM brands as well as local plastic converters and compounders. Staffed with technical and industry specialists who combine more than 30 years of dedicated experience in plastic additives, it more than doubles UniteChem’s existing R&D and innovation capacity and has been purpose-designed to accelerate the time of dedicated sampling for customers worldwide.

Next to injection moulding, film blowing and casting machines, the advanced equipment at the new R&D Center is spearheaded by a high-performance twin-screw extruder serving a wide range of compounding tasks at screw speeds of up to 1,000 rpm. A Xenon and thermal oxygen aging chamber with large water-cooled instruments and a rotating rack unit enable comprehensive accelerated weathering tests. A multi-element analyser for intermediates facilitates product modifications and process adjustments while featuring excellent reproducibility. An array of molecular weight samplers helps in running simultaneous tests e.g. to improve the control of analyte retention, enhance mass spectral sensitivity, minimise cross-contamination and investigate various different chromatographic options. Further devices also include a torque rheometer, a plate vulcaniser and a UV/VIS spectrophotometer.

“UniteChem has a proud history of driving the development of efficient and sustainable additive solutions, including in particular hindered amino light stabilisers, for use in all major applications areas of the plastics industry”, adds Heiko Strunz, Sales Manager Europe. “While addressing important current trends and future market needs, our extended corporate R&D capacity now helps us respond even faster and brings our innovative services significantly closer to both upstream and downstream customers.”

Asia Pacific is projected to be the fastest growing market for UV stabilisers due to rapid industrialisation and demand from end-use industries such as packaging and coatings. The expansion of the automotive industry in Europe and in countries such as China, India, and Japan in Asia Pacific promotes the usage of UV stabilisers in automotive plastic and coating applications, the report further states. They are known as the major hubs for the production of chemicals and stabilising compounds. India is the most favourable market for expansion considered by various market players due to the low labour and lower production costs compared to other markets.

The increasing awareness of the degradation effects of UV radiation exposures on different objects and materials has also increased the demand for UV stabilisers such as HALS and UVA in the Asia Pacific packaging and automotive coatings application markets. Moreover, the global shift of consumption and production capacity of UV stabilisers from the developed markets such as the United States., Germany, and France to the emerging markets that include India, China, Mexico, Middle East & Africa, and so on, has resulted in the massive market size in the Asia-Pacific region.

HALS account for the biggest segment in the UV stabiliser market, according to the report. With their ability to protect polymers from degradation under UV light exposure and durability as well as long shelf life, HALS are used in thin and thick section applications such as extrusion, blow moulding, fibres, films, tapes, and injection moulding among others. The increasing demand of non- degradable, durable, and high-performance products in automotive, packaging, and furniture & construction industries has fuelled the growth of HALS in the global UV stabiliser market. For packaging, UV stabilisers are capable of protecting the package and their contents from discolouration and effects of UV radiation. They also offer high quality, low volatile and long durability to the packaging materials such as bottles, caps & closures, containers & drums, and films, etc.  among others.

- This article also appears in the International Plastics News for Asia - December 2021 issue. Click here to read the e-zine.