Consumers believe high sodium intake is everyone else's problem but their own, according to a new global SALTS (Sodium Alternatives and Long-Term Solution) Survey released by the Ajinomoto Group, a company dedicated to solving global nutrition issues by continuing to communicate their unique efforts to reduce salt intake.

The SALTS Survey was conducted across seven global markets in North America, Europe and Asia-Pacific to understand consumers' attitudes towards sodium and identify opportunities to develop partnerships and tools to reduce sodium consumption overall.

The survey found the large majority of consumers recognise various health benefits associated with reducing their sodium intake – from health maintenance to illness prevention to increased longevity. Despite this recognition, they do not see sodium intake as a concern that impacts them personally, underscoring the need for manufacturers and retailers to proactively address this public health issue.

Sixty-four percent of consumers know that eating too much sodium is bad for their health, yet only thirty-seven percent pay attention to how much sodium they consume. 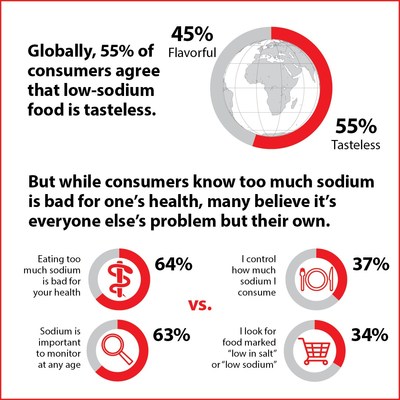 Consumers indicate that they would prefer their grocery store not sell high-sodium foods. In theory, this makes sense – if something is not available, behaviour change is inevitable. However, in reality, consumers would not be happy if high-sodium foods were removed from store shelves. The survey indicated that the majority of consumers prioritise taste above all else when deciding what to eat and currently believe low-sodium foods are bland and tasteless.

There are solutions. The Ajinomoto Group is making lower-sodium foods that taste good and can be a model for other global food companies. "There is an opportunity here," says Rains, "If companies make nutritious food taste delicious at a good price point, consumers will buy them, and then companies will make more of these healthier options leading to improved diets and ultimately, a benefit towards public health."