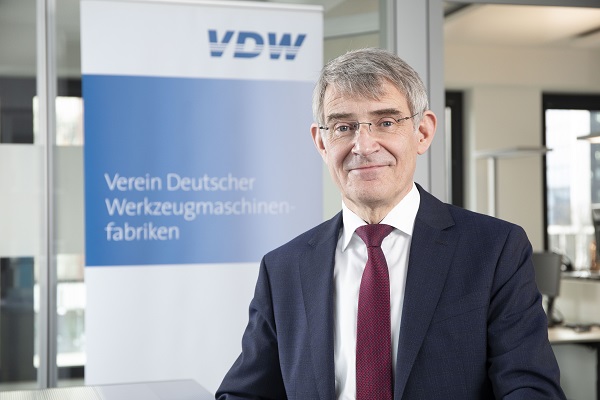 Annual global investment in energy-related plant is set to more than double in the future, from EUR 762 billion in 2020 to EUR 1.808 billion in 2040. This represents an annual rise of 4.4 percent in real terms. That was calculated in a recent study by the VDW (German Machine Tool Builders' Association), Frankfurt am Main, in cooperation with the Munich-based consulting firm Strategy Engineers. As the researchers report, there are a number of promising areas for the machine tool industry. These include the production: of gearboxes and bearings for wind energy, of core components such as compressors, pumps and valves for electrolysis, of fuel cells and of large numbers of heat pumps.

The aim of the study was to examine the opportunities and challenges which are arising for the machine tool industry as a result of the energy transition. The study looks at the entire energy value chain of electricity – from generation via distribution through to storage. Renewable energy has a central role to play here. Also considered are hydrogen, stationary and mobile fuel cells, heat pumps, and carbon recovery and storage. "The German government has declared its intention to speed up the energy transition process – which has significantly raised the pressure. Greater efforts are needed to combat man-made climate change. At the same time, the war in Ukraine is drastically illustrating how important it is to free ourselves of our dependence on fossil fuels," says Franz-Xaver Bernhard, Chairman of the VDW. "Available exclusively to our members, the study provides timely guidance on how worthwhile it is for machine tool manufacturers to expand their customer base to include the power industry," Bernhard adds.

The power sector is responsible for a quarter of CO2 emissions. It therefore has a major role to play in the reduction of pollutants. Many industrialized countries have committed themselves to the goal of limiting global warming to 1.5 degrees by 2050, but massive investment will be required in order to achieve this. Key solutions include expanding low-emission energy sources, upgrading the power grid and developing a hydrogen economy.

Major investment is therefore being made in zero-emission technologies such as solar and wind power, as well as in enabling technologies for the energy transition, such as power grid expansion, carbon emission reduction (CCUS), the establishment of a hydrogen economy, and heat pumps.The development of renewable energy sources (wind power, solar power, hydropower) currently accounts for EUR 288 billion of invest-ment, a figure which is set to rise to EUR 569 billion by 2040.Investment will need to be made in the future in securing global power supplies in the face of increasing volatility due to the increase in renew-able energy sources. As a result, investment in the power grid will rise from around EUR 220 billion at present to more than EUR 600 billion in 2040.Similarly, major growth is expected in the development of a hydrogen economy and in the expansion of carbon capture/storage technologies, including power-to-X technologies, where the political will to promote the technologies will be crucial.There is great demand for "transitional technologies" such as nuclear and gas-fired power plants to ensure base and peak load capability, and an undisputed need for their further development. Investment in these technologies will depend heavily on regional political developments. There will be a significant worldwide decrease in investment in emis-sions-intensive technologies such as coal-fired power generation by 2040.

"But that's not all; the variety of applications and technologies makes it necessary to consider the individual areas in detail in order to identify the potential areas of machine tool use," explains Bernhard. The VDW study does this by analyzing the demand for the machine tools needed to machine the relevant components in the individual segments. Metal components which involve a high degree of machining and have exacting tolerances and surface quality demands are required especially for mechanical conversion in gas, steam and water power plants as well as in wind turbines and flywheel storage systems.

Accordingly, the greatest potential is offered by wind turbines components which involve sophisticated gearbox, tracking system and large-bearing production processes. This is further reinforced by the trend towards ever more powerful plants. Also relevant is the construction of gas turbines for power generation in gas and steam power plants. Finally, high volumes of many overlapping peripheral components (such as pumps, compressors, generators, bearings, valves, tanks and pipes) are required.

Heat pumps used for heating buildings are of particular interest on account of the large volumes involved. In the future, the focus will shift to components for the expansion of the hydrogen economy such as compressors and stack end plates for electrolysis, and mobile and stationary fuel cells. Beyond the generation, storage and distribution of power itself, potential also lies in automation technology for the production of photovoltaic modules, battery cells and fuel or electrolysis stacks. Energy distribution requirements, for example in transport vehicles or special ships, as well as machines for the production of components for the implementation of the energy turnaround complete the demand.

Overall, the energy sector does not currently feature strongly in machine tool sales. However, the projected 3.6 percent real growth per year of the relevant market segment until 2040 is significantly above the average longer-term global market growth for machine tools (1.1 percent). "The study shows that the considerable growth predicted for the power industry up to 2040 offers clear potential for manufacturers," VDW Chairman Bernhard sums up. "It is especially worthwhile for companies that are already active in the power industry and/or are looking to diversify their customer base to consider the study results carefully. They provide valuable information that is not available anywhere else at this level of detail," he concludes.