An electric motorcycle can be produced in 30 seconds, with a frame accuracy error of less than 0.5 mm. Recently, located in the China-ASEAN New Energy Electric Vehicle Production Base, the intelligent factory in Guangxi Luyuan Electric Vehicle Co.,LTD has been fully launched, in which the modern workshops will realize "strong manufacturing" in quality more than the "mass manufacturing" in output, according to the Publicity Department of Gangbei District, Guigang City. 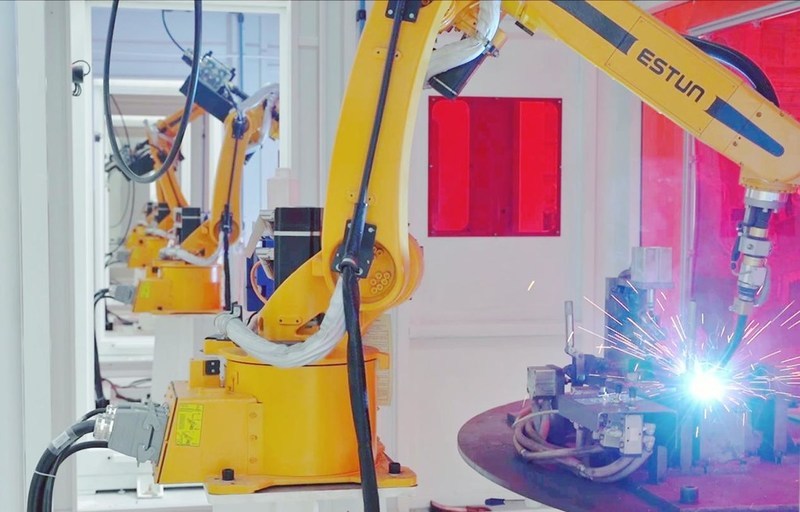 Robots in Luyuan Guigang intelligent factory are assembling products. There are 60 welding robots in the factory now.

The intelligent factory, with a total investment of RMB 400 million, covers an area of 258 mu and takes only 248 days from groundbreaking in December 2020 to completion in September 2021. With advanced pipe processing, welding, and assembly process equipment in the industry, and through the intelligent and digital production in the factory, real-time information connectivity and automatic processing have been achieved in key processes such as frame manufacturing, iron and plastic parts coating, motor manufacturing, and whole motorcycle assembly. Moreover, production equipment in the workshop has been put into the Internet of things (IoT), which can not only improve efficiency, but also reduce labor costs.

In this intelligent factory, automatic cutting, bending and welding are realized in frame manufacturing of electric motorcycles, which are monitored with the MES system, so that the accuracy error of finished products is less than 0.5 mm. It is planned to equip the intelligent factory with 10 automatic production lines for synchronous pre-assembly, 5 of which have been completed so far. With these production lines, an electric motorcycle can be produced every 30s, for which the products move from the "mass manufacturing" in output to the "strong manufacturing" in quality.

In recent years, the Gangbei District in Guigang City, Guangxi, has seized the development opportunity brought by the Belt and Road Initiative, and continued to optimize the business environment, planning to build a 10,000-mu China-ASEAN New Energy Electric Vehicle Production Base. Up to now, nearly 100 electric vehicle enterprises have been introduced and more than 50 electric vehicle enterprises have started operation. Guangxi New Energy Electric Vehicle Products Quality Testing Center and Guangxi Electric Vehicle Industry Association have been established successively. An annual production capacity of 4 million two-wheeled electric motorcycles, 500,000 three-wheeled electric vehicles and 5 million sets of spare parts has been formed, with the local matching rate reaching 80%.

From January to September this year, the industrial output value of enterprises above the designated size in the new energy electric vehicle industry of Gangbei District increased by 37.9% year on year. Key components such as motors and plastic parts are continuously sold to domestic and ASEAN markets. In addition, Gangbei District also creates "Marshal Travel", a local shared electric bicycle brand, which has been put into operation, and it plans to put more than 500,000 shared electric bicycles in Guangxi within five years, and expand to the whole country in the future.