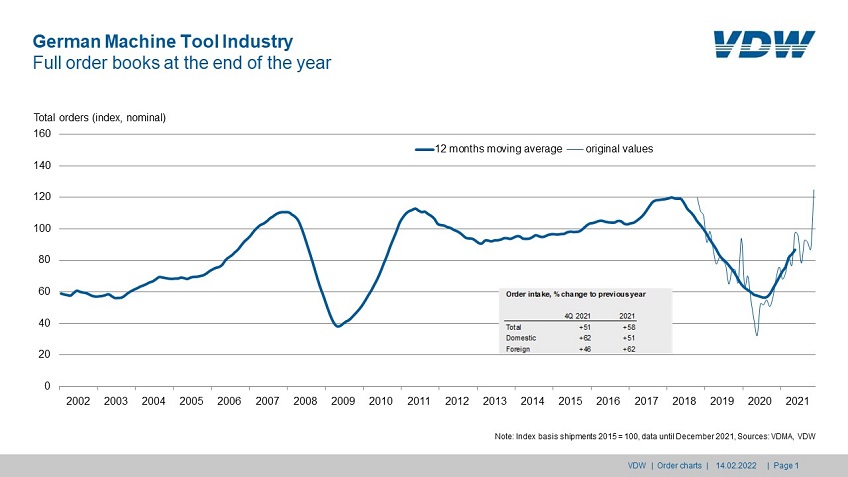 In the second quarter of 2022, order intake in the German machine tool industry rose by 24 percent compared to the same period last year. In this context, orders from Germany increased by 27 percent and those from abroad by 23 percent. In the first half of 2022, orders increased by 34 percent overall. Domestic orders contributed to this with a 35 percent increase and foreign orders with a 33 percent increase.

"Despite the current difficult conditions, machine tool orders continued to develop well in the second quarter. In relation to the first half of the year, volumes are even almost at record levels from 2018. Foreign business is primarily supported by demand outside the EU. In particular, our two lead markets China and the USA remain strong. The severe lockdown in Shanghai and other Chinese cities did not leave any deeper traces in the second quarter," commented Dr. Wilfried Schäfer, Executive Director of the VDW (German Machine Tool Builders‘ Association), Frankfurt am Main. " In terms of technologies, cutting machining is currently pulling up the overall result Demand in the first half of the year was twice as strong as that for forming technology. This is an indication that major projects in the automotive industry are currently on hold, especially in Germany," Schäfer added. Forming technology accounts for around 30 percent of total machine tool sales. Press technology in particular is used in major projects.

Sales continue to be a cause for concern. In the first half of the year, it was 7 percent higher than in the same period of the previous year. In real terms, the result means stagnation. "Accordingly, as feared, the supply chain problems are far from over," says Schäfer. After all, capacity utilization rose slightly from 85.9 percent in April to 87.4 percent in July.

70 percent of German machine tool production goes into exports, which picked up again in the second quarter. The statistics thus show an increase of 5 percent in the first six months. Exports to Asia grew the most strongly in a regional comparison at 11 percent. However, China, the largest market, made only a disproportionately small contribution, with a 5 percent increase. By contrast, Japan, India and some smaller markets in Southeast Asia took up German machine tools with double-digit growth rates.

Business with American customers also continues to be good, with a plus of 9 percent. Europe stagnated at the previous year's level, with exports to Eastern Europe in particular slumping sharply due to the breakaway from Russia. Exports to Western Europe, on the other hand, have picked up significantly.

Imports rose by a total of 16 percent. Asian suppliers in particular are leading the way. "They are obviously able to circumnavigate the supply chain problem better", Schäfer suspects.

"The uncertainties for economic development have increased further," VDW Executive Director Schäfer sums up. Regarding the Russia-Ukraine war, he says, there is no end in sight. The energy supply in the coming fall/winter remains uncertain with corresponding consequences for prices. In China, the largest market, there are signs of weak overall economic growth. Added to this are geopolitical dangers in dealings with Taiwan. Accordingly, the business climate in the machine tool industry has clouded over. "At least on the plus side, there is still a high need for investment in climate change. The recently adopted investment program in the USA will also provide impetus for the industry," Schäfer concluded.