Creating products that are good for the planet starts at the top. Ensuring every company understands not only the environmental but also commercial benefits of a green culture is key. Denmark-based Accustrip is a company characterized by being leaders in environmental and energy efficient equipment.

In an interview with CEO Mr. Mikael Nielsen, he shared with Kathryn Gerardino-Elagio of International Metalworking News for Asia (IMNA) the company’s solutions and plans to grow its business in Asia, one of the world’s fastest growing regions. 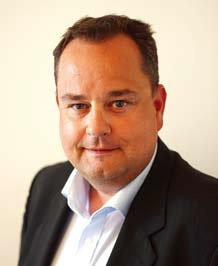 Mr. Nielsen: Accustrip is a private owned company, situated in Denmark in the harbour city of Svendborg. Accustrip is dedicated to work with periphery equipment, for CNC machines. Accustrip is one of a kind, a typical danish company characterized by being leaders in environmental and energy efficient equipment.

IMNA: How do you plan to introduce Accustrip brand known to customers in Asia?

Mr. Nielsen: Accustrip is planning to work in cooperation with local partners. We are looking for agents, in the Asia and Asia-Pacific regions, who have the CNC branch experience, knowledge, and network.

Accustrip is also planning to start an office in Asia. It will help us to ensure the best possible deliverables and support for potential customers, dealers, and business partners in general.

IMNA: What motivated the company to try and introduce your company in Asia?

Mr. Nielsen: For many years, Accustrip has been making business in Asia, specifically in China where not only a considerable large number of suppliers are located, but also where manufacturing continuous increasing. Furthermore, automation in the region has considerably been escalating, which Accustrip will with this expansion follow both suppliers and customers.

IMNA: Are you planning to build a production location outside Europe? If yes, will this facility produce the same filtration-, oil-separation products? Which particular industry will you supply?

Mr. Nielsen: First stage, we are planning acquiring a strong dealer network and an office in Asia. Accustrip is always ready to listen to and solve costumers’ needs and wants. Accustrip is very agile and decisions have a short way through the organisation. Machining industry is the main focus for Accustrip’s mission, i.e. to optimize CNC machine performance.

IMNA: Do you currently have any joint ventures in R&D or marketing perspective with foreign

companies? Would you entertain this idea if you don’t at present?

Mr. Nielsen: Accustrip has agents/dealers all over the world except in Asia, which makes it a natural step to start up in Asia ASAP.

IMNA: Does the current crisis affect your business strategies?

Mr. Nielsen: No doubt, everything is delayed, and it creates uncertainty across the industry. We at Accustrip are lucky that a lot of companies use this situation to invest in automation and lean production. Accustrip’s plants are a powerful lean tool.

IMNA: What are the measures taken at both technological and non-technological levels in order to convert challenges into opportunities especially during this time?

Mr. Nielsen: It is important to increase awareness and information levels. Information is key.