“In these tough economic times, the Cobot case packer helps processors who struggle filling unskilled labour positions while also meeting COVID-19 social distancing requirements,” said Taras Konowal, Director of Sales and Marketing for North America. The jobs of packers are highly repetitive and unfulfilling, but highly needed, according to Mr. Konowal. The new case packer enables moulders to re-allocate their workforce to more productive, fulfilling jobs. Industry data show that while baby boomers age 55 and older represent 27% of the U.S. manufacturing workforce, a total of 10,000 boomers are reaching retirement age every day. The problem for plastic manufacturers is that millennials and Generation Xers are not interested in filling manufacturing gaps left by boomers, surveys show.

The cobot works side-by-side with an employee doing many basic tasks. When an employee comes close to the cobot, it slows down but continues to work. Unlike traditional industrial robots, the cobot system doesn’t require external guarding and all safety features are built into the cobot. 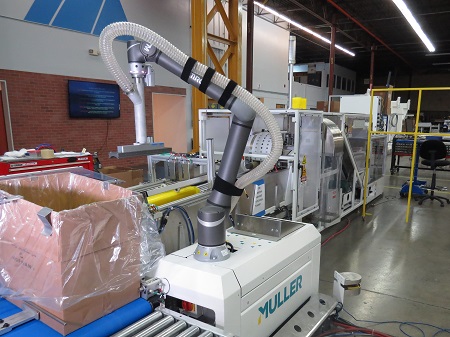 The cobot case packer incorporates a standard Muller Human Machine Interface (HMI) which eliminates any programming requirements and stores multiple recipes for a wide range of stack and box sizes. The case packer can be purchased separately or integrated into an automation line such as Muller’s new M-Line system, a new integrated robotic and automation system which delivers significantly greater flexibility and versatility for production of injection moulded packaging.

The cobot case packer offers portability, quick part changeover for different size configurations, and a return on investment of less than one year. The product platform will be manufactured in Switzerland and Colorado. Muller has already sold several units for lids and containers in the U.S. and Europe.

Muller Technology Colorado (formerly CBW Automation), based in Fort Collins, Colo., is a leading U.S. supplier of robots and automation solutions with a focus on injection moulding and thermoforming applications in the packaging and medical sectors.  Swiss-based Muller Technology Conthey (formerly H. MÜLLER-Fabrique de Moules SA) was founded in 1959 and is a pioneer and leader in the field of packaging design, mould, and automation solutions for injection moulded thin-wall packaging with leading-edge expertise in in-mould-labeling (IML).