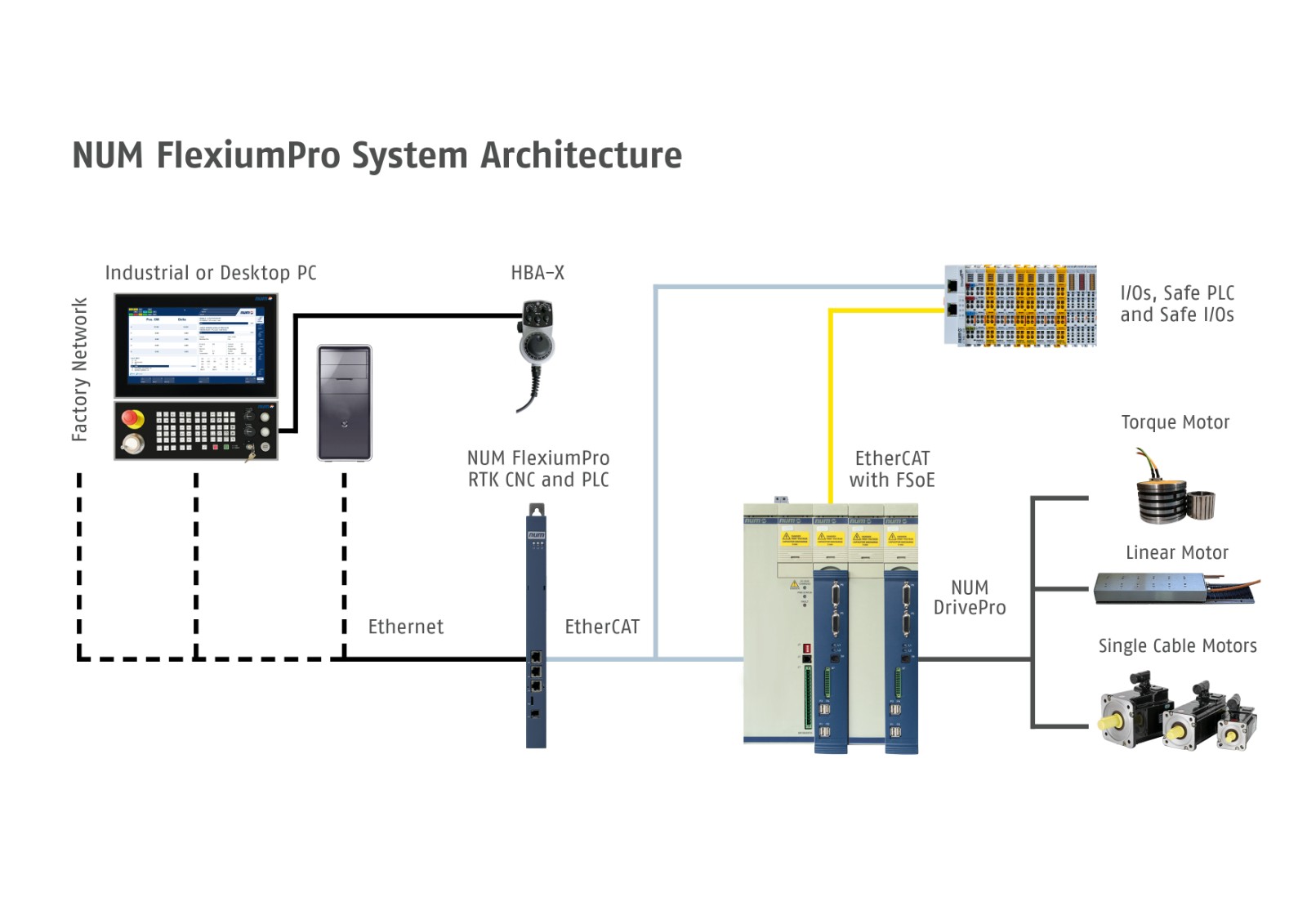 FlexiumPro’s Real-Time Kernel (RTK) hosts an embedded Codesys V3 PLC and a CNC unit. Based on a multi-core ARM processor, the RTK is implemented using advanced system-on-chip (SoC) technology. The tightly integrated nature of this technology helps to significantly reduce the component count, resulting in improved system reliability and compactness. The single-board and fan-less design of the RTK unit is only 25 mm wide.

The speed advantages of NUM’s FlexiumPro CNC system are considerable. Its hard real-time operating system reduces latency and obviates the time overheads of complex ‘soft’ operating systems; every aspect of the hardware and firmware is optimised to maximise machine precision and performance, while delivering secure connectivity.

Compared to its Flexium+ predecessor, the new system is more than 10 times faster – from boot time and block-per-second execution, to axis control, PLC/CNC data exchange, robot and peripheral I/O interfaces.

The PLC application, part programs, machine configuration, calibration data, etc., are all safely saved on a removable microSD card – and to secure shutdown processes, the FlexiumPro RTK incorporates super-capacitors, which keep the system alive for the time needed to save all data in the case of hard power off.

Machine users and OEMs familiar with NUM’s Flexium+ CNC system will find it very easy to migrate to FlexiumPro. Its PLC programming languages and environment are identical to Flexium+, part programs remain compatible with both systems, software interfaces to custom HMIs (Human Machine Interfaces) remain very similar, and all EtherCAT terminals and safety devices are unchanged.

FlexiumPro retains and extends all behavioural and functional aspects of NUM’s Flexium+ system. These include control of up to 32 axes and/or spindles, up to 32 machining channels, and sub-nanometre interpolation capabilities. The system still supports RTCP (Rotation Tool Centre Point) and HSC (High Speed Cutting) functions, as well as a number of technology-specific functions and machining cycles.

NUM has also developed an innovative user interface (UI) architecture for FlexiumPro that can incorporate individual OEM-defined modules with integrated features related to the technology. Until now, OEMs often had to develop dedicated HMIs for specific technology in their products, which could be an expensive, time-consuming task.

NUM’s new FlexiumPro dual-layer HMI architecture significantly simplifies this aspect of machine tool design. The functionality of the underlying user interface modules (UIMs) can easily be defined, modified and saved by OEMs, facilitating the creation of highly ergonomic application-specific HMIs. This new approach to user/machine interaction utilises the latest software technologies – WPF for the UIMs and C# for the software development kit (SDK) – to maximise performance in terms of speed and resource management.

Like its Flexium+ predecessor, NUM’s FlexiumPro HMI runs under the Windows operating system; it can either be directly connected to a FlexiumPro RTK or it can run remotely on any PC connected to the same LAN as the FlexiumPro RTK. For additional flexibility, the system also supports multi-HMI configurations (for use when a single machine tool has more than one HMI), PLC-based visualisation pages, and NUM’s renowned Flexium 3D graphical simulation software.

Concomitant with the launch of FlexiumPro, NUM is also introducing a new series of high performance drives and a new four-axis power unit. The new NUM DrivePro drives are available in one-axis, two-axis and four-axis configurations.

NUM DrivePro drives incorporate a multi-core ARM processor and are implemented using advanced SoC technology. To avoid latency and overheads, there is no operating system between the CPUs and the software – it is a bare metal programming. As a result, each NUM DrivePro control unit can handle up to 4 axes simultaneously, with a position loop sampling time of 50 µs.

For maximum flexibility, NUM DrivePro drives can control any type of electric motor, including spindle, servo, linear, torque, synchronous and asynchronous. The control loop of each axis can be closed with up to 3 external sensors – typically these would be a motor encoder, a machine encoder such as a linear scale, and an accelerometer. And for maximum configuration flexibility, each drive unit supports as many as 99 complete parameter sets.