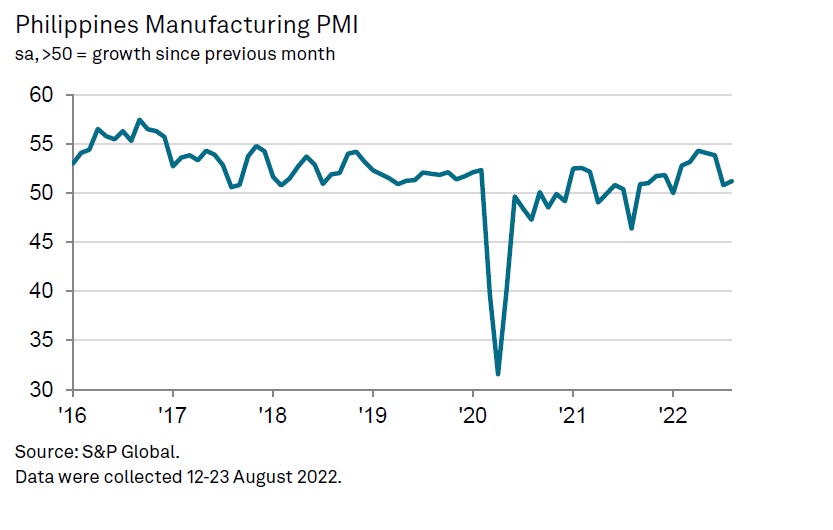 Filipino manufacturing firms signalled growth across the sector for the seventh month running during August. The rate of expansion improved from the six-month low seen in July as output stabilised and a softer contraction in new orders was registered.

The S&P Global Philippines Manufacturing PMI® posted above the 50.0 no-change mark that separates growth from contraction for the seventh month running, with the latest reading improving marginally from 50.8 in July to 51.2 in August. While this signalled a stronger improvement in the health of the sector, the uptick was weaker than the series average.

August data suggested some relief as the seasonally adjusted Output Index stabilised after contracting for the first time in six months during July. Moreover, the rate of contraction in new orders softened in the latest survey period, with firms reporting only a marginal decrease in client demand overall. Total sales were weighed down by a sharper decrease in new export orders, however, as foreign customer demand fell at the steepest rate since January.

On the employment front, strong gains in workforce numbers helped boost the latest headline PMI figure during August. Firms hired additional staff for the fourth consecutive month as firms hoped for expansion in production in the coming months. Additionally, the rate of job creation was the fastest since June 2017.

That said, lower new order inflows led to firms cutting back on purchasing activity during August. While the rate of contraction was only mild, it marked the first reduction in input buying since January.

Despite increasing for a year, stocks of raw materials and semi-finished items rose at the softest pace since October 2021, with the rate of increase easing for the fourth month running. Growth in post-production inventories showed a similar story, as stocks rose at the weakest pace in the current run of accumulation that began in February. The softer increases in inventories reflected weak client demand.

Meanwhile, supply-chain disruptions intensified during August, with lead times lengthening to the greatest extent in five months. Shipment delays and port congestion were predominately cited by respondents as the main causes of delivery delays.

Supply-side disturbances along with rising energy and material prices, exerted upward pressure on operating expenses in August. As a result, purchasing costs have now risen in each month since May 2020. Firms reported a rapid increase in input prices that was among the sharpest on record, albeit softer than that seen in July.

In line with rising average cost burdens, firms increased their factory gate charges further in August, thereby extending the current sequence of selling price inflation that began in May 2020. Moreover, the rate of charge inflation was the quickest in five months.

Lastly, sentiment across manufacturing firms in the Philippines remained strongly positive during August with around half of survey respondent’s hopeful of an expansion in output in the coming 12-months. However, the degree of confidence posted second-lowest in seven months and was subdued in the context of the series history.

Headwinds heighten concerns that inflationary pressures, supply chain disruptions, the weakening of the peso and a high interest rate environment, with further hikes expected, will squeeze demand as clients’ disposable income will take a hit.

While the Filipino economy showed strong growth post-COVID, the following months will challenge momentum, with the PMI data already recording softer output expectations for the year ahead.