COVID-19 induced health awareness and favourable government policies are accelerating the sales of meat alternatives in China, the world’s biggest meat market. An increase in the availability of innovative and customised products is also incentivising consumers to substitute meat with plant-based meat and other meat alternatives. As a result, China’s meat substitutes market is set to expand at a compound annual growth rate (CAGR) of 7.7% to reach CNY3,622.3 million ($567.5 million) in 2026, forecasts GlobalData, a leading data and analytics company.

GlobalData’s report, “China Meat Substitutes Market – Trend Analysis and Forecasts to 2026,” reveals that grain-based category will register the highest value CAGR of 8.2% over the forecast period, followed by vegetable/plant-based meat-substitutes with a 7.7% CAGR. 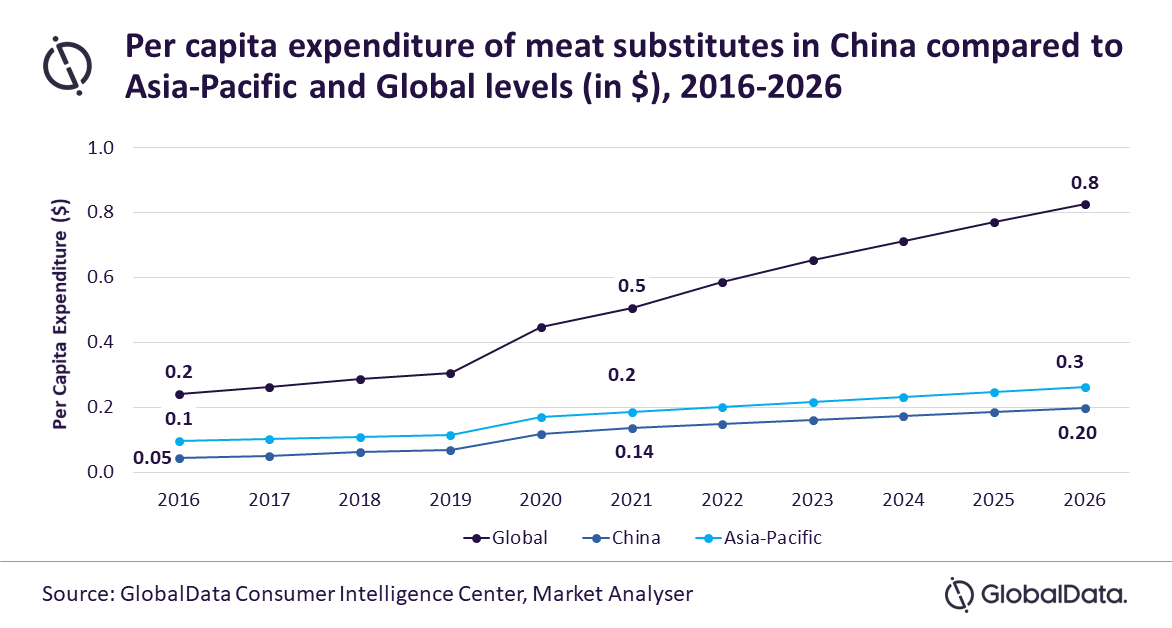 Bobby Verghese, consumer analyst at GlobalData, comments: “Soy- and tofu-based meat alternatives are ingrained in the traditional Chinese cuisine, and the country is a leading global supplier of plant proteins. However, China lags western markets in terms of the mass-retail penetration of meat substitutes, primarily as meat alternatives cost more than animal meat. Additionally, as meat is perceived as a healthy and nutritious food, the common man is unable to grasp the relevance of meat substitutes. Moreover, earlier most meat substitutes in the marketplace were alternatives for western fast foods, such as burgers and meatballs, not Chinese food.”

“However, since the COVID-19 outbreak, consumers have grown more aware of the health risks caused by excessive meat consumption. Many consumers have begun substituting a portion of animal meat in their diets with meat alternatives. Moreover, the shortage of pork meat due to intermittent outbreaks of COVID-19 and African Swine Flu has spurred demand for meatless pork substitutes. In addition, innovation as international and domestic companies fight for market share in the artificial meat space has stimulated the launch of more meatless meats that are customised for Chinese cuisine.”

In 2021, hypermarkets & supermarkets was the leading distribution channel in the Chinese meat substitutes market, followed by convenience stores and e-retailers. Shenzhen Qishan Food, Beijing Ershang Xijie Food, and Pulmuone were the top three companies in the Chinese meat substitute market in 2021 in value terms, while Whole Perfect Food and White Jade were the leading brands.

“China’s meat substitutes market will gain more momentum in the coming years, given that the government targets a 50% reduction in per capita meat consumption by 2030 under its Healthy China 2030 initiative. This will lead to a decline in domestic livestock farming, which aligns with China’s national target for reducing carbon emissions and attaining carbon neutrality by 2060,” adds Verghese. “The resurgence of COVID-19 outbreaks in 2022 will motivate more health-conscious and weight-conscious consumers to switch from animal meat to animal-free meat. As a result, China’s per capita expenditure on meat substitutes is projected to reach $0.2 by the year 2026.”