Dust, agglomerates, micro foam in the product: Conventional procedures for feeding powders into liquids pose numerous problems. In contrast, the Conti-TDS inline dispersing machine from the mixing and dispersion technology specialist ystral relies on the principle of vacuum expansion, and achieves a safe, dust-free and complete wetting and dispersion with this within a short time. 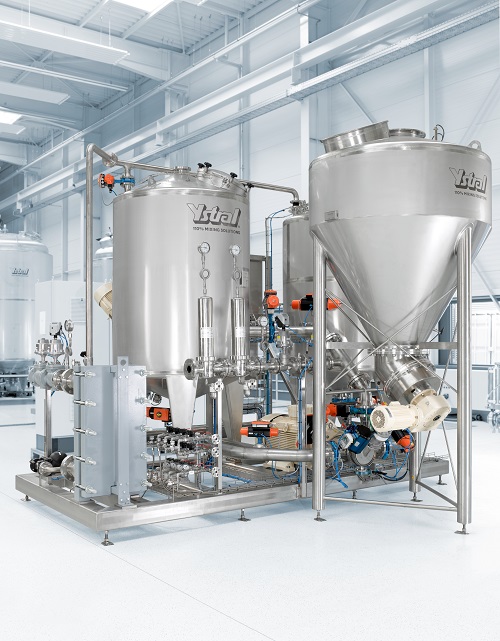 The handling of powder generates dust. This is not the only problem. In most cases, powders are agglomerated - and the finer the powder, the more it tends to agglomerate. The causes of agglomeration are manifold. In addition to physical and electrostatic forces (Van-der-Waals, Coulomb, Sinterbrücken), there are a lot more causes for the formation of agglomerates in everyday production. For example, temperature increases above the glass transition temperature during transport cause particles to melt (caking), while cool storage can lead to the dew point being undercut, lead to condensation within the powder and thus liquid bridges between the particles.

In order to achieve the best possible dispersion result, it is important to break down existing agglomerates immediately during powder induction, as well as to avoid the formation of new agglomerates during powder induction in liquids from the outset. Otherwise, these agglomerates must be broken down subsequently through long stirring and time-consuming redispersion – often with negative consequences for the product quality: The texture of yoghurt is destroyed, and additional proteins and stabilisers are required. In shampoos, viscosity decreases, and an additional thickener must be used. Polymers are destroyed and resins or binding agents are overheated. Furthermore, redispersion costs time, energy and unnecessarily blocks the process vessels.

For this reason, the powder particles must be separated already before coming into contact with the liquid, and each particle must be individually wetted fully. The particle surface to be wetted during powder induction is vast. It is between one and one thousand square metres per gram of powder. A 25 kg sack of powder can thus have a particle surface to be wetted with a size between 25,000 square metres and 25 square kilometres. Adding to this external surface, for porous particles such as silica gel for example, there is an internal surface, which must also be fully wetted.

Powders also contain a lot of air. Even heavy powders such as titanium dioxide have a volume share of more than 75 % air. For light powders, the share can be more than 95 %, and this air must be fully substituted by liquid and separated. The air must not be dispersed with the powder, as this results in micro foam. 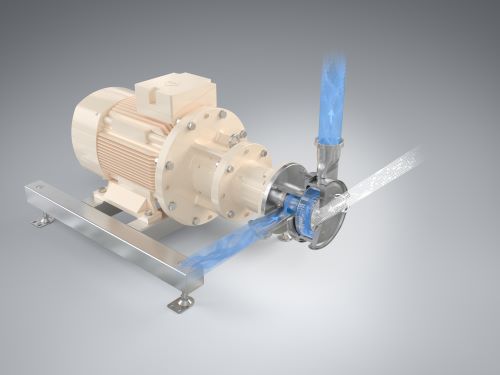 With the powder wetting and dispersing machine YSTRAL Conti-TDS, even powders which are difficult to wet, which raise dust or are adhesive can be dispersed agglomerate-free.

Conventional procedures of powder induction into liquids by means of agitators, injectors or inline mixers generate mostly undesirable agglomerates. The powder particles do not come into contact with the liquid individually, bus as a compact discharge. The liquid surface, which is available to the powder for wetting, is smaller than the powder surface to be wetted by a large scale. This leads to sturdy, partially wetted agglomerates, which are difficult to break down.

These issues become particularly apparent when feeding powder into an open vessel from above: This leads to partially wetted clumps on the liquid surface. In the worst case scenario, they swim on the surface, in the best case scenario, they go under. Dust above the liquid on damp surfaces leads to adhesions, powder crusts and contaminations on the vessel wall, cover, agitator shaft and all fittings in the vessel. They later break off into the product and impair the quality. If an extraction system is used for the prevention of dust, an unchecked powder quantity will get lost in the filters as a result. Furthermore, when stirring into an open vessel, vortexes will form, which carry additional air into the liquid.

Vacuum conveyors, which move the powder into the vessel with little dust, still generate dust above the liquid, and rather a lot of it. So the wetting issues inside the vessel are not really avoided, but made worse in a way.

It is also unavoidable for agglomerates to form in vacuum process vessels, as the particles are not separated before contact with the liquid, and the liquid surface is much too small for complete wetting. At the same time, vortexes are generated, and there is a risk that a part of the powder is extracted non-wetted by the vacuum pump and thus gets lost.

For injectors with pump upstream or downstream, the liquid surface is also not sufficient by far. Such a system often has a dispersing machine downstream in order to break down the agglomerates that formed. However, the air contained in the powder is dispersed particularly finely, which significantly impacts on the dispersing effect, and generates stable micro foam.

The shortcomings of these conventional powder wetting procedures are avoided with the YSTRAL Conti-TDS inline dispersing machine developed by ystral. With the Conti-TDS, there is complete deagglomeration and wetting as well as a substitution of air by liquid within microseconds.

The inline dispersing machine is operated on one or more process vessels. It pumps the liquid in the circuit, and extracts the powder from the sack, hopper, big bag, silo or container into the liquid. To separate the powder particles, the Conti-TDS uses the principle of vacuum expansion: Here, the air contained in the powder is expanded by a multiple, which significantly enlarges the distance between the particles. The particles are separated and fluidised without additional air.

Powder and liquid in the Conti-TDS only come into contact with each other in the wetting chamber – under maximum vacuum and maximum turbulence. The powder particles have the largest possible distance to each other in the dispersing zone, and can thus be fully wetted and dispersed individually. The machine generates a liquid surface of approx. half a million square metres per minute. This is more than is required for full wetting.

The air, which was previously contained in the powder, is separated from the significantly heavier dispersion through the centrifugal effect of the fast running rotor and coalesces to large air bubbles. These are then pumped to the process vessel with the liquid flow, where they can easily escape.

The economic advantages of the vacuum expansion method are enormous: For example, during colour production, costs can be reduced by more than 90 % this way, while resins can be dissolved in a fiftieth of the time, with a significantly improved product quality.