Power of the pomegranate


NOT surprisingly, the coronavirus pandemic has had a massive impact on how people around the world view their health. As awareness of the need for preventive healthcare and balanced nutrition has increased, consumers are following a “better for you” approach to food consumption. Botanical extracts perfectly tap into these new lifestyle trends, as they are both natural and scientifically proven ingredients.

COVID-19 has reinforced belief in herbal medicine and nutraceuticals, strengthening a back-to-basics mentality. In addition, more young people are showing an increased interest in such remedies. According to Verified Market Research, the global botanical extracts market was valued at USD 4.57 billion in 2019 and is projected to reach USD 8.51 billion by 2027, growing at a CAGR of 8.7%.[i] Asia-Pacific accounted for the largest market share in 2018 and is predicted to grow at the highest CAGR during the forecast period. Rising demand from emerging markets is one of the major factors boosting growth in this region. With the pandemic’s catalytic effect, sales of botanical products are expected to grow in Southeast Asia, with the Philippines and Vietnam being key drivers, followed by Malaysia and Indonesia. 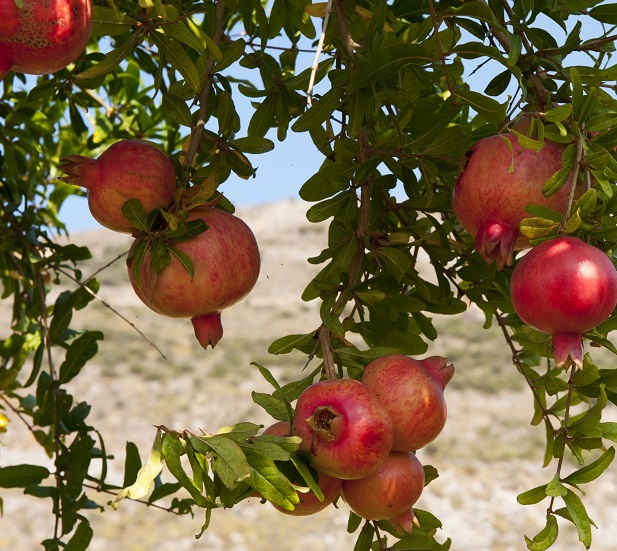 Much of the existing research on natural pomegranate extract has focused on its cardiovascular health benefits; healthy ageing advantages such as modulation of inflammatory and metabolic responses, as well as prebiotic effects, have also been observed in these clinical studies. (Pomegranate tree © Ivonne Wierink I Dreamstime.com)

Such market development is not surprising given the fact that botanical compounds are regarded as a health-supporting gift from Mother Nature. In addition, most of them provide holistic effects. Pomegranate extract, for instance, is a nutraceutical powerhouse, rich in secondary plant compounds with unique antioxidant and age-defying properties that have a positive effect on various bodily functions. Pomegranates are also a symbol of health and longevity in many cultures around the world. For thousands of years, they have been used both as food and traditional medicine. Euromed, a producer of standardised herbal extracts, obtains a natural fruit extract from carefully cultivated pomegranates using a patented water-only extraction process. The extract – Pomanox® – is ideal for inclusion in functional foods and beverages, dietary supplements and nutricosmetics.

Pomanox® contains up to 30% punicalagins, which are among nature’s strongest antioxidants. They naturally stimulate the production of nitric oxide, a vasodilator that helps improve blood circulation. A pre-clinical study with Pomanox® by the Catalan Institute of Cardiovascular Sciences (ICCC) demonstrated that pomegranate polyphenol metabolites increase the synthesis of endothelial nitric oxide synthase (eNOs), promoting prevention and reversal of endothelial dysfunction caused by general inflammation and artery hardening.[ii] Endothelial dysfunction is greatly under-diagnosed in the general population, but plays a major role in the early stages of poor blood circulation and, in its latter stages, is associated with plaque progression and the occurrence of cardiovascular issues. With rapid industrialization and an ageing population, heart health issues are becoming a major concern in Southeast Asian nations. Cardiovascular diseases accounted for 27% of all deaths in South Asia and 40% in East Asia in 2013.[iii]

Hypertension is another risk factor for cardiovascular diseases and its prevalence increases with age. In a clinical, placebo-controlled study, the participants given Pomanox® for eight weeks had lower blood pressure than the control group, indicating that the pomegranate extract may help promote healthy blood pressure.[iv] Supplementation with such a low-calorie extract of pomegranate also means avoiding the increased calorie intake associated with the frequent consumption of juice.

In addition, supplementation with Pomanox® may work synergistically with Euromed’s olive fruit extract Mediteanox®: a randomised, double-blind, placebo-controlled, crossover study[v] by the Clinical Nutrition Department of the La Paz University Hospital in Madrid evaluated the combined administration of Mediteanox® and Pomanox® on 67 apparently healthy, middle-aged volunteers. The researchers found that an intervention with the supplement for 8 weeks, compared to placebo, exerted anti-atherosclerotic effects by improving endothelial function, blood pressure and levels of circulating oxidised low-density lipoproteins, especially in those showing alterations in these parameters.

Much of the existing research on natural pomegranate extract has focused on its cardiovascular health benefits; however, additional healthy ageing advantages such as modulation of inflammatory and metabolic responses, as well as prebiotic effects, have also been observed in these clinical studies. Other evidence-based health benefits of Pomanox® from published and unpublished clinical studies include hair health support, improvements in cognition and mood, and better endurance. A randomised, placebo-controlled, crossover trial by the Department of Exercise Physiology, San Antonio Catholic University of Murcia in Spain, investigated whether Pomanox® could improve peak performance of trained amateur cyclists after an exhausting endurance trial. It demonstrated improvement in performance and recovery after 14 days of supplementation with the pomegranate extract.[vi]

A clinical trial tested Pomanox® acute benefits on a range of cognitive domains, through a validated, standardised, computerised, cognitive assessment called COMPASS, developed by Northumbria University (UK).[vii] The results demonstrated that the cognitive benefits of Pomanox® are evident one hour after intake, significantly improving speed of information processing, working memory and episodic memory. These are relevant domains when focus, faster information processing and more efficient storage and retrieval of information (working memory) are needed (such as before and during an exam), but also domains affected by cognitive ageing and dementias.

Results from an in vitro study provided a “proof of concept” that Pomanox® could maintain skin elasticity through in vitro observed positive modulation of collagen metabolism, modulate oxidative stress and provide a protective effect against UV-induced oxidative damage before and after exposure to UV rays. Moreover, it was able to inhibit tyrosinase activity – an enzyme that catalyses the production of melanin in the skin – with the effect being comparable to that of commercial tyrosinase inhibitors such as thiazolidine, commonly used to reduce hyperpigmentation. These results corroborate the hypothesis that the extract may be an effective ingredient for skin beauty.

Taken together, these indications suggest that pomegranate can help maintain a superior quality of life during the ageing process. With the rising demand for healthy, natural and functional food and beverages in Southeast Asia, botanical extracts such as Pomanox® have a big potential to grow in the region in 2022 and beyond.

[vii] Stockton A, Zangara A and EAS Al-Dujaili. Chapter 10, in: Nutraceuticals in Brain Health and Beyond (2020); Academic Press, Elsevier.