Russia-Ukraine crisis and its impact on the plastics industry


The invasion of Ukraine by Russia is expected to have its impact felt not only by countries in the European region but also by the rest of the world. As the war continues, concerns on its social and economic repercussions are being voiced out as it has led to thousands of people killed and millions fleeing from their homes; while economic damages are now being experienced globally. In its first assessment of the economic and social impacts and policy implications of the war in Ukraine, the Organisation for Economic Co-operation and Development (OECD) says Russia’s invasion on 24 February 2022 has caused a humanitarian crisis in Ukraine, destroying lives, homes and infrastructure, while throwing the strong global economic recovery from the COVID-19 pandemic into doubt.

Amid the uncertainty, the OECD estimates a setback in global economic expansion as it projects that growth will be more than 1 percentage point lower this year as a result of this conflict; while inflation, already high at the start of the year, could rise by a further 2.5 percentage points on aggregate across the world. Commodity prices have also risen sharply. It is known that Russia and Ukraine combined account for about a third of global wheat exports, and are important producers of fertilisers and metals used in industry such as nickel and palladium. Aside from disruptions in food and fertiliser supplies, soaring oil and petrochemical prices, metals prices could affect a wide range of industries, according to the OECD. As Russia supplies about 19% of the world’s natural gas and 11% of oil, energy prices have risen drastically. Europe in particular is vulnerable due to its dependence on Russian gas and oil. Gas spot prices in Europe have increased more than 10 times higher than a year ago while the cost of oil has nearly doubled over the same period. The price shock will hurt households and disrupt the production of goods and services worldwide, according to the OECD assessment.

The OECD in its report says the advanced economies of the Asia-Pacific region and the Americas have weaker trade and investment links with Russia than Europe, and some are important commodity producers, but growth will still be hit by weaker global demand and by the impact of higher prices on household incomes and spending.

The global plastics industry is bracing itself for the repercussions should this conflict extends. Aside from the surging oil and energy costs, the industry is preparing itself for the scenario where raw materials and other input prices could continuously rise and affect the production, supply chain and prices of finished products.

One of the effects of the war is disruption in the operations of industry players with production facilities or subsidiaries in Russia and Ukraine.

Clariant has suspended business with Russia in response to the Russian state’s intolerable acts of violence in Ukraine, according to the company statement. Clariant’s operations in Russia include a sales office and a laboratory in Moscow and contribute approximately 2% to the company’s annual sales. “We strongly oppose Russia's war against the Ukraine and support the vote of the UN General Assembly that the Russian government must immediately stop the aggression, withdraw its troops, and abide by the rules of the UN Charter. Our thoughts are with our 146 employees and their families in the Ukraine and we are doing everything in our power to support them. We join them in hoping that this brutal violence will end soon. Continuing to do business under these circumstances is incompatible with our purpose and values. Therefore, we have decided to suspend all business with Russia with immediate effect,” said Conrad Keijzer, Clariant’s Chief Executive Officer.

LyondellBasell also announced that it will not enter into any new business transactions or relationships with Russian state-owned entities. In a message by its interim CEO Ken Lane on the Ukraine crisis, he stated that: “We also intend to discontinue business relationships with Russian state-owned entities to the extent legally possible. We are in the process of assessing how this will affect our operations, including feedstocks, utilities, supply chain providers, and customers. Additionally, we are complying with all U.S. and international sanctions which have been put into place as a result of this crisis.”

The conflict in Ukraine has triggered increase in raw material prices.

Another industry player, DuPont, said that it continues to monitor the crisis in Ukraine. Due to recent developments, DuPont has decided to suspend its business operations in Russia and Belarus. The safety and security of its employees and their families remain its highest priority, according to DuPont.

Belgian chemicals group Solvay also suspended operations and new investments in Russia after the invasion of Ukraine, the company said. It also suspended dividend payments from its RusVinyl joint venture in Russia with partner Sibur. “Solvay has decided to suspend its operations and new investments in Russia,” CEO Ilham Kadri said in a statement, citing the conflict in Ukraine. The suspension is temporary and will be reviewed in due course, a spokesperson said, adding that the company had put a task force in place to manage the impact of the measures. The company has 26 employees in Russia who will continue to receive salary and benefits during the suspension. Solvay’s direct sales in Russia account for less than 1% of the group’s total revenue and its core profit from Russia and Belarus this year is projected at  €100 million (US$109 million), the company said. The RusVinyl polyvinyl chloride (PVC) production facility in Kstovo was among Russia’s largest petrochemical investment projects and is one of the largest PVC producers in the country with annual production capacity of 330 kt of PVC and 225 kt of caustic soda.

Borealis’ management is closely following the developments around the war in Ukraine and the sanctions that have been put in place. Considering these developments, Borealis is re-evaluating its business transactions with Russia, in compliance with all applicable laws including, where relevant, US, UK and EU sanctions. The company is implementing measures required to ensure the stability in procurement of materials for Borealis' production sites. It is also phasing out sourcing from Russia and Belarus, shifting to sources from the West.

Humanitarian aid and support for Ukraine

The plastics industry is also gathering its resources to provide humanitarian aid and  support for the dislocated families from Ukraine and their affected employees as well.

Through its global corporate citizenship program, Advancing Good, LyondellBasell donated a total of €200,000, with €100,000 going to the United Nations High Commissioner for Refugees (UNHCR) to provide shelter, emergency relief items, cash assistance and mental support.  The other €100,000 goes to the International Medical Corps to support their mobile medical units programs. 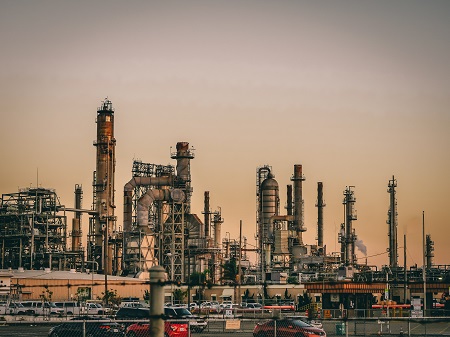 As Russia supplies about 19% of the world’s natural gas and 11% of oil, energy prices have risen.

Covestro also announced its donation amounting to €250,000 to the UN refugee aid (UNO Flüchtlingshilfe), the German partner organisation of UNHCR. Covestro is also providing its companies in Slovakia and Poland, where many Ukrainian refugees are currently arriving, with further €40,000, which will be donated to local aid organisations.

At the Austrian plants and in many subsidiaries of ENGEL, aid campaigns for people affected by the war in Ukraine have been launched within a very short time. ENGEL Austria has transferred €100,000 in immediate aid to the organisations. ENGEL Deutschland collected €25,000 euros for the Ukrainian Parish in Hannover within 24 hours, and the donations are still coming in.

Clariant employees took the initiative to help their colleagues in Ukraine or to support aid organisations on the ground. Clariant Foundation has made a donation to United Nations Children's Fund (UNICEF), which is working with communities in Ukraine to ensure that children and families in need can be helped right away.

The Solvay Solidarity Fund has donated €1 million to the Belgian and International Red Cross in support of relief efforts for the civilians impacted in Ukraine. Funds will help provide access to clean water, medicine and medical equipment, repair vital infrastructure, and improve living conditions for families. Solvay has also committed to matching employees' private donations to help address the growing humanitarian needs.

Teijin Limited announced that it will donate JPY 40 million as humanitarian assistance from the Teijin Group in support of the many people suffering in Ukraine in addition to JPY 10 million yen it has donated via the UNICEF and the UNHCR. So far, two group companies in Europe have made direct donations: Teijin Aramid B.V. (Netherlands) sent €35,000 via a Dutch foundation and J.H. Ziegler GmbH (Germany) provided blankets and pillows for Ukrainian refugees in Hungary. Other companies in the Teijin Group, particularly in Japan and Europe, are considering offering further humanitarian aid up to the amount above mentioned in total.

Other companies in the plastics industry are holding fundraising campaigns to provide much-needed supplies for the dislocated families and those affected by this conflict.

- This article also appear in the International Plastics News for Asia, April issue. To read the magazine, click here.