Sandvik Coromant has unveiled a new machining method that enables controlled chip breaking in thread turning applications. Launched within the existing CoroPlus® Tool Path software, OptiThreading™ is a new software module that will help manufacturers overcome one of the most significant issues within thread turning — the risk of chip jams and their associated downtime. 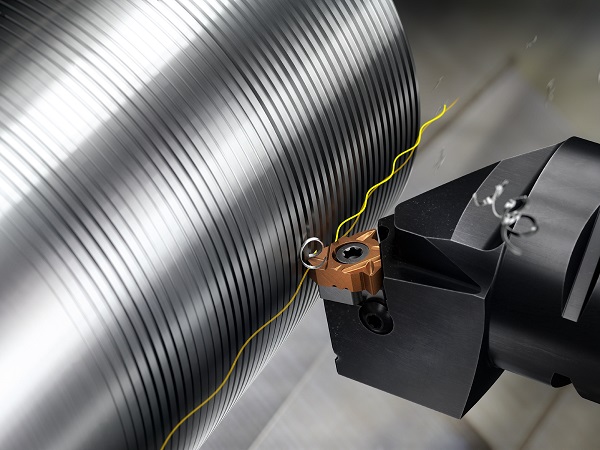 A common problem in thread turning is that chips coil around robots, chucks, tools and components. The chips can also get caught in conveyors, causing damage and equipment downtime. Successful chip control is the key for good component quality when thread turning.

OptiThreading™ has been designed with these challenges in mind. The module is available as part of a subscription to the CoroPlus® Tool Path, and is developed specifically for CoroThread® 266 tools and inserts.

Using the method and software, manufacturers can fully optimize their thread turning operations. As part of the solution, CoroPlus® Tool Path helps users develop optimized OptiThreading™ tool paths that specifically conquer the challenge of chip control. This is achieved by offering tool paths that deliver controlled, oscillating movements for interrupted cuts that go in and out of the cut on all passes except the last one.

There are several reasons why OptiThreading™ and the CoroThread® 266 are suitably matched threading partners. OptiThreading™ creates high cutting forces, and thus needs a tool that can withstand them. The CoroThread® 266 has an iLock interface that gives exceptional stability on insert indexing, making it capable of handling extreme forces. The tool is also available in a wide variety of assortments, with a selection of grades and geometries that cover most materials and applications. Together, the software and hardware solutions deliver secure, precise threading that is not hampered by poor chip control.

"OptiThreading™ solves the most extensive issue within thread turning, which is chip control," said Hampus Jemt, Product Manager at Sandvik Coromant. "Through CoroPlus® Tool Path, we already offered software for optimized turning, and we offered a robust tooling solution in the form of the CoroThread® 266. Now, as we introduce OptiThreading™, we're able to help customers overcome one of their biggest concerns with performing thread turning."

"We understand the challenges of the machine shop. Pressures to get the job done fast make unplanned downtime a thing of nightmares, so avoiding the perils of chip control is crucial. Having this all-embracing solution as part of our offering means we can help manufacturers adopt a new threading methodology that not only soothes their worries regarding chip control, but also helps to produce higher quality components."