In the less than 20 years since PROXCYS Downstream Biosystems B.V. was founded by Marcel Raedts in 2003, it has become one of the world’s leading producers of high-performance, low-pressure radial flow chromatography (HP-RFC) columns and systems for use in the purification of biologicals from various sources, such as human blood plasma, cell cultures or bacterial fermentation. The company accomplished this not by turning the bioprocessing industry on its head, but, rather, by flipping it on its side. 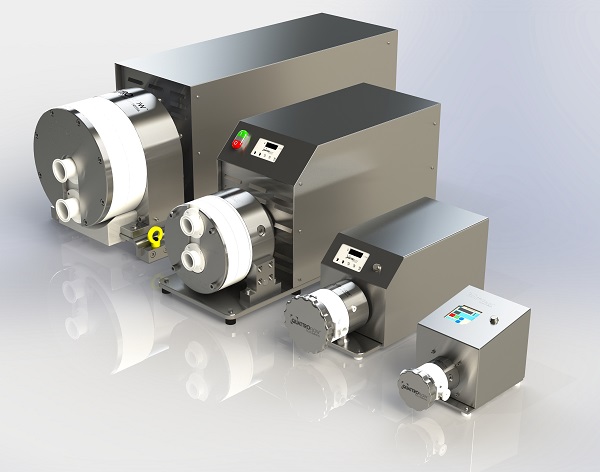 PROXCYS places the Quattroflow™ QF20K pump model, which is available in multi-use and single-use configurations, on its systems that require high-volume transfer of critical HP-RFC liquids.

"There is a bit of a difference between radial flow chromatography and traditional chromatography columns," explained Thijs Groenewegen, Technical Sales Engineer for PROXCYS. "Traditional columns flow from top to bottom, and while the RFC separation principle is the same, the column design is different. Instead of top to bottom, the RFC flow is from the outside to the inside of the column. We more or less turned the cylinder on its side, giving you a smaller footprint."

PROXCYS, which is headquartered in Emmen, The Netherlands, a town located in the northeastern corner of the country, helped establish its standing in the RFC market by becoming an early proponent of the technology.

"Traditional columns have a larger market share, but they have been used for a long, long time," Groenewegen continued. "HP-RFC columns have been in use for 10 to 12 years, but we are still expanding that market. The technology is already very popular when used with human plasma products, but the popularity of new pre-packed SUPR RFC columns for use with cell culture/fermentation-biopharmaceuticals is also growing quickly, along with the functional-food market, which is discovering its benefits in process economy and performance, too." 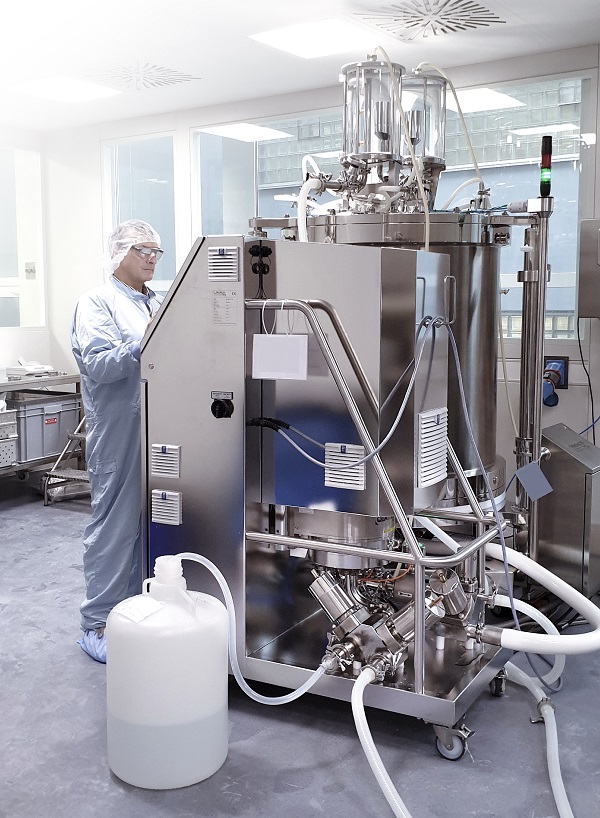 Basically defined, chromatography is a standard purification step in bioprocessing that involves the separation of components in a mixture. In other words, it is used to separate and then purify the biopharmaceutical drug or target molecule from other molecules and impurities in the mixture. This purification is performed in a chromatography column, which is basically a cylindrical vessel fully packed with small 50-100µm chromatography beads, also called resin or sorbent, that is immobilized inside the column. During the purification process, the mixture of product and impurities (called the mobile phase) enters the column and passes the resin (stationary phase). The separation is caused by selective binding (adsorption) of the target molecules to the chromatography beads, which can be influenced by such factors as conductivity, pH, salt type and other operating conditions.

Traditional chromatography-column design is "axial." In this setup, the chromatographic media are packed in a rather flat, broad, pancake-like cylinder, with the liquid stream passing through it vertically, from top to bottom, or vice versa. If the task is to raise the manufacturing capacity (scaleup) of a chromatography column, increasing the column height is limited due to the resulting increase of backpressure within the system. This leaves making the column diameter wider as the only viable option to increase the scale. The result is a system that has a short, wide bed that is not efficient in terms of the space required, as well as its overall weight and the increased difficulty in consistently creating a high-performing packed bed. Therefore, in axial chromatography, packed beds are typically taller than necessary in order to reduce the diameter of the axial columns, with an accepted tradeoff: reduced throughput, but increased operating pressure.

On the other hand, RFC, which was actually invented in the 1950s, offers increased throughput and reduced pressure drop, while the system’s weight and footprint can be one-quarter that of the axial-flow columns. As mentioned, unlike axial-flow systems where the liquid stream passes through the chromatography media vertically, RFC sees the media wrapped around a central cylinder, with the liquid stream passing through it horizontally via the application of positive pressure. RFC essentially folds the horizontal bed of the axial system into a vertical cylinder and changes the flow direction from vertical to horizontal. While the purification and fractionation capabilities remain of the process remain the same, the system's footprint and weight are radically reduced.

Therefore, the key to optimized performance in an HP-RFC column is proper packing of the chromatographic media – usually some type of high-value resin – in the tube through which the liquid stream passes.

Packing traditional columns is getting complicated when the ratio of the column diameter over the bed height is over 8 to 10 inches. With HP-RFC, you can easily go beyond 30 inches, which means the bed height can easily be reduced (lower pressure) and/or the column volume can be huge. Additionally, HP-RFC columns are always pump-packed, which facilitates the automation of the system, and with the proper equipment even the extreme formats can be packed effortlessly.

"To develop a perfect packing a lot of variables have to be taken into account – flow speed, back pressure, slurry concentration and resin quantity," said Groenewegen. "The characteristics of the resin beads themselves are also different; some resins are quite fragile and need to be handled gently, while some are quite rigid and can be moved with more force. However, when the parameters are known or optimized, HP-RFC packing is extremely simple, reproducible and reliable." 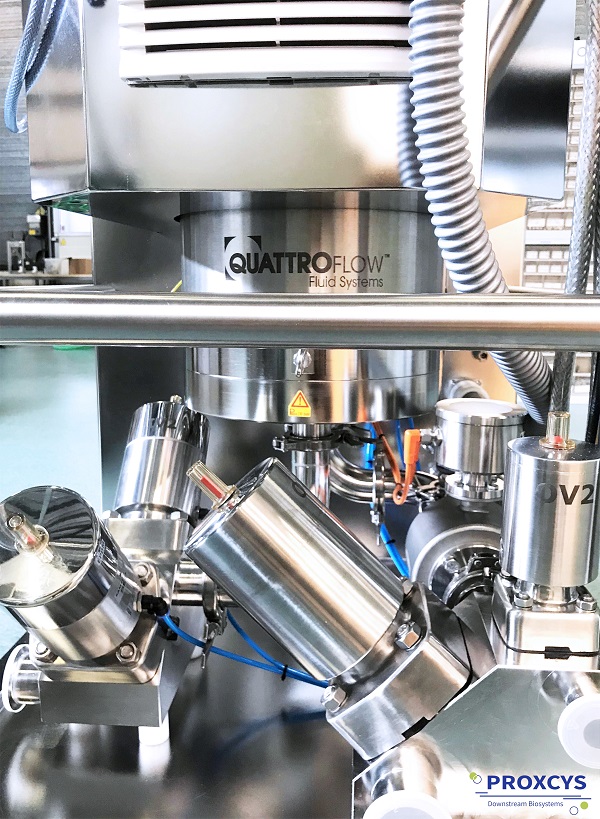 Key to proper packing of any resins into the HP-RFC column is using the proper pumping technology. For the past decade, PROXCYS has been incorporating Quaternary (Four-Piston) Diaphragm Pump technology from Quattroflow™, Duisburg, Germany, a product brand of PSG®, Oakbrook Terrace, IL, USA, a Dover company, into its proprietary column-packing systems.

"It's actually quite simple for us – Quattroflow checks all the right boxes," said Groenewegen. "The pumps are accurate, have a large turndown ratio, have a compact design for easy integration into our small systems, they don’t create foam when they’re pumping and their action is 'fast but gentle' to allow shear-sensitive resin beads to be pumped without damage. The Quattroflow pumps are excellent for projects where you need a gentle pump, but one that still produces high flow rates and is easy to control."

The main advantage in the use of Quattroflow pumps in HP-RFC applications is its unique form of operation: The four diaphragms are driven one after another by a connector plate, which moves back and forth out of its central position in a stroke that is generated by an eccentric shaft, with the length of the stroke determined by the angle of the eccentricity. In other words, the Quattroflow technology has been modeled on the operation of the human heart – which is eminently capable of pumping whole human blood, one of the most shear-sensitive products in the world – with its four pumping chambers and check valves keeping product flow constantly moving forward.

The Quattroflow pump chambers also contain no rotating parts that can be subject to friction, meaning that this minimizes any operational heat buildup that can compromise the product.

This mode of operation also means that the pumps can run dry, are self-priming and are able to create low shear because of low slip. In addition, they offer low-pulsation, leak-free operation while having great dry/wet suction-lift capabilities and are easy to control to achieve the required flow rates or pressures. In other words, they possess all of the characteristics that are required for proper RFC column packing. 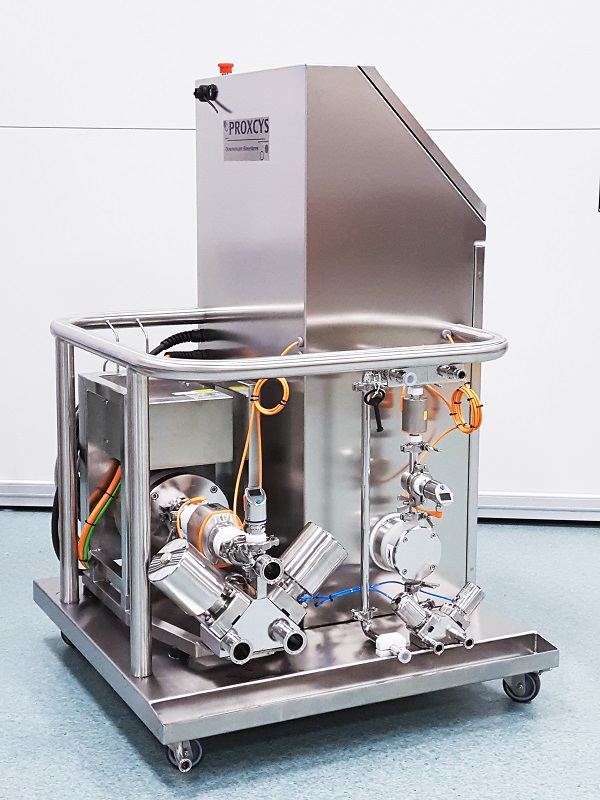 "We use the entire range of Quattroflow pumps," said Groenewegen. "The smaller QF150 is integrated into systems used in smaller laboratory spaces for column packing; the QF1200 and QF4400 are used in our larger systems when you want to move from a lab environment to a production environment; the QF5050 is used where we need the most compact footprint possible. However, despite the QF5050 being the most compact pump, we recently managed to build a most powerful system with the QF20K on a footprint of only one square meter! The new QF10K was a welcome addition to the QF20K being used in our largest systems with big chromatography columns."

At one point, PROXCYS did admittedly take another pump supplier for a test drive, but the pumps – which had two rather than four diaphragms – just couldn’t make the grade: "After a few minutes, the pump stopped because the resin beads were stuck between the membranes of the pump," Groenewegen recalled.

In recent years, the bioprocessing market has seen increased demand for pumps with replaceable heads and Quattroflow has responded to this change in mindset by creating single-use versions of nearly all of its pump models. This is attractive to the growing number of manufacturers who wish to use pumps with heads that can be simply changed out after production runs, rather than having to install a permanent stainless-steel production line that will need to be cleaned after each production run.

"If you have a batch process, they like to swap the single-use head with a new one and then move on to the next campaign – and the Quattroflow single-use pumps allow you to do that," said Groenewegen. "Personally, I try to push the single-use pumps because I think that’s the direction the industry is moving toward, and it is also pairing with our own strategy promoting the SUPR pre-packed HP-RFC column line." 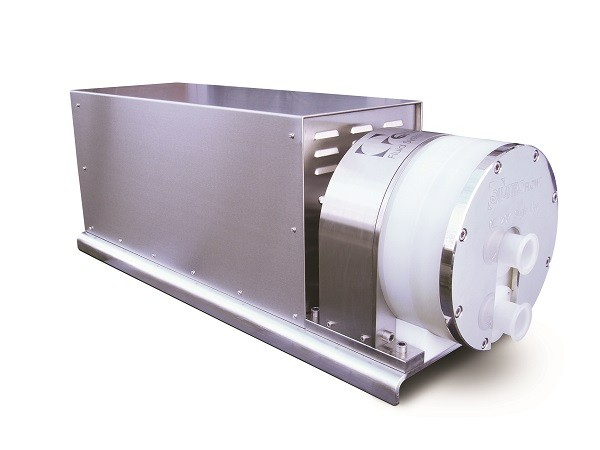 Quattroflow Quaternary (Four-Piston) Diaphragm Pumps helped the kick off the PROXCYS Downstream Biosystems HP-RFC revolution that started two decades ago, to the point that in 2012 PROXCYS became the official distributor of Quattroflow pumps in the Benelux (Belgium, The Netherlands and Luxembourg) countries. It is a symbiotic relationship between two industry pioneers that Groenewegen sees continuing well into the future.

"In a world that likes to replace machines as fast as possible simply because we want to, when you see that the Quattroflow pumps have been able to meet our needs for so many years, it is a great testament to them," he said. "We were looking for a pump that was versatile and reliable and Quattroflow is that brand for us. It is also a brand that we like to work with and want to work with for many more years."