The JEC World at the Paris-Nord Villepinte exhibition centre remains a leading exhibition for the composites industry. It is at this event where TARTLER Group introduced its innovative dosing, mixing and application systems for synthetic resin processing. The TARTLER solutions can easily handle both liquid and highly viscous media. Among other things, the company presented an efficient system for the new direct infusion process as well as the successful degassing stations for resource-saving material use. These include the T-EVAC evacuation system in its stand-alone and dosing system-integrated variants, and the TAVA 200 F vacuum filling system. They all work with vacuum technology and serve the purpose of freeing pasty and low-viscosity media from interfering air and moisture – both during the filling process and during feeding into the processing plant. The systems can also be used for production-integrated re-conditioning of material residues, for targeted waste reduction and for the realization of in-house material cycles.

“In particular, all those resin users and composites processors who are dissatisfied with the previous methods of vacuum infusion due to safety-critical material accumulations, poor material degassing and high installation costs were able to witness TARTLER direct infusion for the first time, as well as the T-EVAC for efficient degassing, alongside the proven TAVA series, according to Managing Director Udo Tartler. As things stand, the new direct infusion is an innovative alternative to the previously used – and often suboptimal – variants of vacuum infusion. Both initial customer projects and benchmarks at the company's own research and development centre (R.D.D.) have shown that TARTLER’s direct infusion technology can offer numerous process and safety benefits. These include, for example, that thanks to precise real-time control of the infused resin quantities, the proportional material weights and the mixing ratios, the highest demands on the end product are met. Another advantage is that the system allows the use of faster curing agents without the risks of unwelcome resin accumulations with a tendency to exothermic reaction. In addition, its precise temperature control enables very short infusion times – which in composite technology ensures rapid impregnation of the fiber fabrics and thus reduces process times. “For all this, we don't need containers with resin masses already mixed, nor do we need elaborate installations with abundant sensor technology. Rather, the linchpin of TARTLER direct infusion is an intelligent pressure regulation system. It ensures that the optimum application pressure is always present at the mold inlet – resulting in numerous process advantages,” reports Olav Davis, TARTLER’s head of research and development. 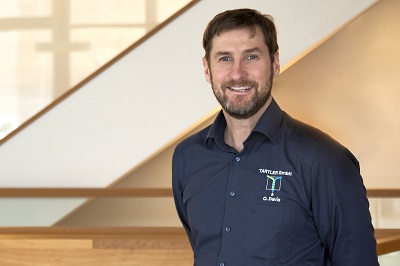 The new TARTLER solution is therefore a pressure-controlled direct infusion system in which all pressure fluctuations caused by operation and the environment are automatically compensated. This applies to all system-typical influences – even those resulting from the different pressure resistances of different hose lengths or the height differences of a mould. This results in rapid, reliable and uniform resin delivery to the mold inlet and ensures that the full vacuum value is always present in the mould. As a result, TARTLER direct infusion offers the user many new approaches to process optimisation. For example, by using faster hardeners, the curing time can be reduced and, thanks to the intelligent control of the pressure compensation, it can dose at a significantly higher flow rate – with the same infusion set-up. “The system requires an average lower volume flow than a bag-based infusion system or a standard infusion system, which always rely on the rapid supply of a lot of material, thanks to the continuous permanent supply of fresh material,” Mr. Davis says. It should also be mentioned that residual quantities of premixed resin masses from process bags or buckets, which are relevant for disposal, do not occur in the first place. 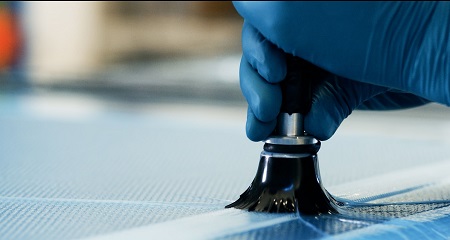 With TARTLER-style direct infusion, the user consequently receives a whole bundle of advantages. The process is safe and efficient, proves to be material-saving and cost-cutting – and optimizes vacuum infusion from the ground up. The next higher level of optimization in terms of low-waste material use and improved infusion and resin quality is made possible by using a T-EVAC series vacuum degassing station. These stations are installed upstream of the direct infusion: As an offline central station to supply several metering and mixing systems (manufacturer-independent) or as an inline system integrated directly into a NODOPUR from TARTLER. Before the actual processing, they free the epoxy or PU resins from air and moisture in a hermetically sealed vacuum process and bring them to the desired application temperature. In this way, only optimally conditioned material enters the infusion process, which has excellent properties for impregnating the fiber fabrics and does not cause any process disturbances.

The offline T-EVAC is available in two variants: For direct connection to dosing systems or with an additional buffer tank, which considerably reduces refilling times. In the process, this tank is located between the degassing station and the dosing system (e.g., a NODOPUR VS AR VF Infusion). “It is used for safe temperature-controlled storage of the degassed material under full vacuum and rapid filling of the metering systems,” says Mr. Davis. In the inline solution, the T-EVAC is integrated into the dispensing system. System filling and material degassing take place in one step, and machine refueling can be synchronized with the application. The inline T-EVAC requires less personnel and floor space. When operated with only one dosing/mixing system, it is also more cost-effective than the offline variant.

The vacuum-based TAVA 200 F degassing station from the TARTLER GROUP, which was also presented at the JEC, is in turn regarded as a forward-looking solution for the sustainable and resource-saving use of self-fluent and paste-like media. Especially in plants where larger quantities of high- and low-viscosity fluids are processed, the evacuation system enables the realisation of waste-free and safe filling and transfer processes. With the TAVA 200 F degassing station, all material residues can be filled into lidded drums without “disturbing air” and then safely reintroduced into the processing cycle with low losses. The savings in material purchasing achieved in this way can reach considerable dimensions. For example, one of the leading manufacturers of wind turbines was recently able to reduce its consumption of synthetic resin by around 28 metric tons of synthetic resin paste per year by using the TAVA 200 F, thus significantly lowering the overall costs in its rotor blade production. This simultaneously counteracts waste and makes a handsome contribution to resource conservation. In addition, the manufacturer has been able to improve the eco-balance of its value chain and reduce the ecological footprint of its business.

The TAVA 200 F is configured and delivered by SOMATA, a subsidiary of the TARTLER GROUP, to meet customer requirements. The degassing station is available as standard for the air-free filling and transfer of 200- and 50-liter drums, but can also be adapted to other container sizes upon customer request. It consists of a device for clamping and stabilizing the drum, a special combination attachment for synchronized vacuum generation and filling, a vacuum pump, and a control system with touchscreen. All components are installed on a base with a barrel centering plate and are accessible from all sides. While loading the station, positioning a still empty drum, and closing the clamping device can be done manually, the vacuum application to the drum and the almost simultaneous filling of the material are fully automated. After a few minutes, a drum is filled without air and is ready for use in production.

- This article also appears in the International Plastics News for Asia - June issue. To read the e-zine, click here.