Proco’s new Half-Cube Palletizer automation technology was developed in response to customer demand, according to John McCormick, president of Proco Machinery. He added that the system has taken collaborative robotics to a new level, and fills an important need for packaging manufacturers. The new automation technology blends this human-like collaborative robotic system together with Proco’s industry-leading expertise in the blow molding and packaging industries.

“The Half-Cube Palletizer can be easily and quickly adapted to a variety of packaging and repetitive manufacturing situations working alongside existing workers or working independently,” said Siva Krish, Vice President of Sales for Proco Machinery. Proco has already sold the Half-Cube Palletizer systems to leading U.S. custom blow molders of PET containers.

The Half-Cube Palletizer system is a totally integrated packaging module and is supplied with a six-axis collaborative robotic arm, infeed conveyor, pallet lift magazine and Slip sheet/Tray pick and place magazine on a common sub-frame which in turn is fitted with leveling pads and castor wheels. The system has a maximum height of 55-in which is the half-cube configuration that is common to most U.S. blow molding operations.

The only manual operation occurs when an operator places the trays in the magazine. When palletizing is complete, an alarm sounds and the operator pulls the pallet out and places another pallet in the magazine. The Half-Cube Palletizer handles both slip sheet and tray configurations in 44 x 56 and 40 x 48 sizes. 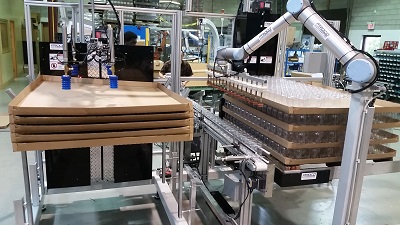 The system can be moved into position, set up, and quickly put in production. The Half-Cube Palletizer provides maximum flexibility and efficiency and can be configured to pack all necks up or all necks down. In situations where a standard configuration does not suit a particular application, Proco’s engineering team can develop a custom designed system to provide an efficient, cost-effective solution.

The Half-Cube Palletizer is designed for easy portability. The complete system including integral in-feed conveyor can be easily moved from one location to another, ensuring maximum flexibility within a manufacturing setting. The innovative automation system does not require highly skilled workers or engineers to teach it new tasks. The Half-Cube Palletizer system is designed so that the maintenance staff with minimum initial training can operate and do changeovers easily. Alternatively, Proco also offers both on-site and off-site programming/training services at minimal cost.

Due to the sophisticated design of the Half-Cube system, complex safety guards are not normally required. However, Proco offers guard packages as optional equipment. It can work alongside existing workers thereby making integration into the existing workplace environment easy and cost effective. Proco Machinery offers the new Half-Cube Palletizer globally.