The coronavirus crisis made the world realise how vulnerable lives are, and how important solidarity is towards survival. The pandemic has affected millions around the world and as the healthcare sector grapples with developing a vaccine, prevention becomes urgent. Against all odds, the coronavirus crisis has made one thing very clear: companies need to cooperate and work closely with one another to help minimise the rapid spread of the pandemic.

In early March, Dr. Thomas Walther, Head of Application Technology at Arburg, received a "call for help" from a doctor at the hospital in Rottweil. She had heard that, at the K 2019 trade fair, Arburg had produced protective goggles that she and her colleagues urgently need and asked if he could help her. Dr. Walther passed this request directly on to Gerhard Böhm, Arburg Managing Director of Sales, who is already involved in various regional aid initiatives and has also initiated several brainstorming projects of this kind within the company. Both quickly agreed that help could be provided immediately with the resources that were already available. That's how the "protective goggles" project started. Mr. Böhm states: "Whatever we can do in the current situation to help with our know-how and our capacities as one of the world's largest manufacturers of plastics processing machines, we will put it into action quickly."

After Arburg started producing protective glasses, another project to combat the spread of the coronavirus with the production of face masks injection moulded from liquid silicone rubber (LSR) and PP (polypropylene). About 3,500 of these multifunctional high-tech masks are being produced daily under series production conditions. The production is initially targeted to protect the company's own employees worldwide and then will be distributed as quickly as possible via the district of Freudenstadt to hospitals and care facilities.

Fully automated production of protective goggles
For the protective goggles, it quickly became clear that with some coordination measures between Arburg, Ems-Chemie and Uvex, which had already been working together intensively as partners for a long time, these articles could be produced at the Arburg plant in relevant quantities and with relatively little effort. The production started with an initial batch of 20,000 pairs of goggles at the parent plant in Lossburg to remedy the shortage.

At K 2019 in Düsseldorf in October, Arburg, along with the two partners, demonstrated the fully automated production of sunglasses. When the pandemic started, it was easily decided that the already very dense sunglasses could also be transformed into protective goggles, using the same tools and also the same design. After Ems had agreed to the use of the tools and Uvex was willing to make the goggles usable for the new application by means of a quick certification, Arburg set up the production system with removal robot.

The goggles are produced in one piece on an electric Allrounder 570 A with a closing force of 2,000 kN and Gestica control in a cycle time of around 50 seconds. Handling and depositing are carried out by a six-axis robot. Bad parts are sorted out and good parts are deposited on a cooling station.  The goggles are then mass-produced in a simplified injection moulding process, coming out of the machine ready to use. The packaging is done downstream by hand. The packaging is carried out downstream manually by a packaging station of the packaging machine manufacturer Packmat from Villingendorf, which also entered the production chain completely unbureaucratically. The goggles are packed individually with safety and information data sheets in tubular film bags by hand for final distribution. The material for the first batch of goggles, around 500 kilograms of transparent Grilamid TR (PA12), is provided free of charge by the material manufacturer Ems-Chemie from Domat in Switzerland – help with an European dimension. Once the eyewear packaging has been CE-marked and assembled, the distribution started.

The first 20,000 pairs of protective goggles were distributed free of charge via official channels to hospitals, nursing homes and civil defence organisations in Germany and Switzerland.

High-tech manufacture of masks
After Arburg started producing protective glasses on Allrounder injection moulding machines in mid-April, it has launched an additional project to combat the spread of the coronavirus. Since May 11, face masks are injection moulded from liquid silicone rubber (LSR) and polypropylene (PP).

"We are involved in various aid initiatives and are also push internal company projects such as this face mask. The demand is enormous. We are receiving specific requests from hospitals and nursing homes from all over the region," according to Mr. Böhm.

Arburg developed the high-quality and sustainable masks made of flexible LSR and PP and additively manufactured the first prototypes with the Arburg Freeformers. The LSR component and mould simulation was carried out using the Sigmasoft software from Sigma Engineering. In a record time of only around five weeks, Arburg partners Polar-Form and Foboha built the corresponding injection moulds for the LSR and PP components. The companies Ewikon (cold runner) and Männer (hot runner) were also involved in the implementation of the mould technology. Other partners were Barth Mechanik (gripper) and Packmat (packaging technology), the raw material for several 10,000 masks was sponsored by the chemical group Wacker and Borealis.

The flexible masks do much more than act as a simple fabric mouthguard as it consists of a soft LSR mask that is put over the nose and mouth and a firm PP shield with eyelets for attaching elastic bands. In the middle there is a standardised connection with a hole (DIN EN ISO 5356-1:2004).  The opening is sealed with a flow gate to protect against infection in everyday life, e.g. for professional meetings or shopping at the supermarket. This diverts the breathing air downwards and thus significantly reduces the risk of infection. In the next expansion stage, a filter housing can be fitted on the opening. Arburg has intended to manufacture this component in cooperation with partners.

By using corresponding FFP2 or FFP3 filters, doctors and nurses, for example, can reliably protect themselves from viruses or bacteria when in direct contact with sick people. The masks are designed for multiple use and can be easily sterilised. "It was also important for us to take advantage of the performance of plastic materials and to create a product that is suitable for long-term use. In this way, resources can be conserved," Dr. Thomas explained. The temper-free LSR material of type Elastosil LR 5040 is suitable for food contact applications according to FDA CFR 21 §177.2600 and BfR XV. In addition, the LSR has good sealing properties, a high tear resistance and can be easily sterilised. 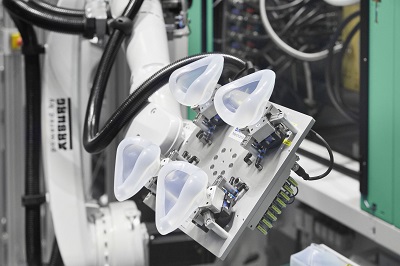 Two electric injection moulding machines are being used for this purpose. An Allrounder 570 A with a clamping force of 2,000 kN produces the LSR masks at the Arburg Training Center using a 4-cavity mould from Polar-Form, while an Allrounder 470 E Golden Electric with a clamping force of 1,000 kN and a 2-cavity mould from Foboha simultaneously produces the associated PP shields at the Customer Center. The larger injection moulding machine operates with a LSR dosing system from Elmet and a six-axis robot from Kuka, which, in a sophisticated demoulding process, removes the flexible masks from the mould and places them on a conveyor belt. In the second machine, the PP shields are handled more easily by a linear Multilift Select robotic system. Finally, the PP shield is manually placed on the silicone mask with interlocking, this is completed with the corresponding elastic bands and packed. By using a temper-free LSR, this step can be carried out without disruptive production stops caused by the time-consuming and energy-intensive tempering of the component. IRNA