Vietnam’s plastics industry has grown significantly in the past 5 years, thanks to the many unique advantages that the country has. The ability to produce lower cost, yet good quality plastic products, is ideal for the export markets such as the US, Japan, Europe, Australia and Cambodia. The local market demand is also increasing in sectors such as live seafood packaging, industrial and agricultural film, in a country of large population of nearly 100 million.

Since 2016, Polystar has already been working with 42 producers in Vietnam and has installed 187 sets of blown film extruders for various applications such as general packaging (garbage bags, vegetable and fruit bags, and shopping bags), seafood packaging and industrial packaging.

Although many of the Polystar blown film machines installed are simply standard one-layer machines, Vietnamese producers have found major differences in many areas compared to their existing machines (mostly Chinese and locally made): enhanced film quality, higher output capacity, lower power consumption, and better thickness variation control. The upgrade in the quality of the end-products (films and bags) has helped the producers to achieve competitive advantage in the market. The improvement in efficiency reduces production cost and gives them the advantage to grow and expand each year. 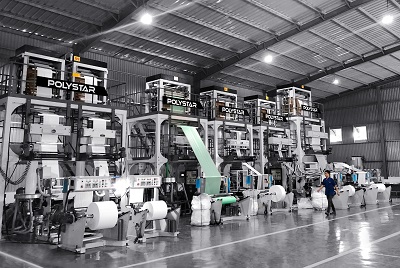 Setting new standards in film quality
A producer located in Long Anh province, Volga has already set a new standard in the local market for LLDPE bags in terms of quality, “We are able to produce better quality films using exactly the same materials,” said Mr. Tuan, who has invested in 10 more sets of Polystar machines in 2019, after having tried the first machine back in 2018. “This gives us a great advantage in the market, and we are able to dictate a better selling price.” Volga now produces one of the best quality film products in the local market, with more than 90% of its film products coming from Polystar machines.

Another bag producer located in Ho Chi Minh city, Tam Sao, has been expanding from 300 to 800 tonnes per month, thanks to its ability to produce good quality yet low-cost plastic bags, which are now exported to Europe, Thailand and Cambodia.

“Our goal is to expand to 1,500 tonnes per month, and we rely heavily on Polystar blown film extruders to stay competitive in the market,” according to Mr. Ho, the owner of the company. Tam Sao has replaced all of its Chinese made blown film machines step by step with Polystar extruders since early 2016. “We were surprised that a simple machine can make such a big difference in operation. “To be honest, we had doubts in the beginning to invest in more expensive machines when we saw the price, as the initial investment on machines was more than doubled from our previous machine suppliers,” but we are so happy afterwards that we made the right decision 4 years ago,” Mr. Ho adds. 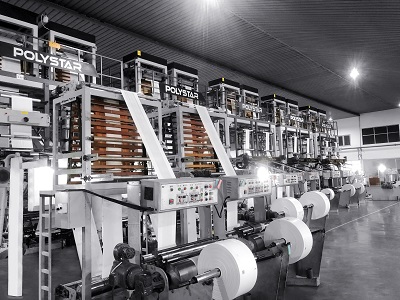 Speaking about his key to success and fast growth during an onsite visit in 2019, Mr. Ho said he calculated the overall operation costs carefully and found out that investing in better machine is actually more cost-saving. “The machine investment is, in fact, a relatively small percentage of our total operation cost which includes material, electricity, space and labour costs,” he added, “if you invest in the right machines, all of these other costs go down and the investment comes back in less than one year. I would say this is the most important factor that has put us ahead of other competitions,” Mr. Ho stressed.

When asked to share details on the actual user experience, Mr. Ho states: “In our previous machines, the electrical components start to give problems here and there after just several months. You would not know the difference in machine quality until you really put them side by side and compare carefully,” he added.

Mr. Ho is also satisfied that since having switched to Polystar machines, he has been able to reduce operation and labour costs significantly. “When we produce the same product on a Polystar twin head 55mm extruder, the output almost doubled compared to a similar spec machine we had before. We’ve saved so much factory space and operation cost, basically producing more with less numbers of machines and less operators.”

To further cut down production cost, the company uses a very high percentage of calcium carbonate compounds (CaCO3) and recycled material. “We can load a high percentage of CaCO3 in the Polystar extruders, sometimes up to 60~80% in mono layer. This was not possible before with other machines,” according to Mr. Ho.

Simple and stable operation
A fifteen-year-old company, Minh Huy Long, who recently completed its new factory putting only Polystar machines, says that simple and stable operation is the main reason why he has chosen Polystar as his long-term partner for expansion. “Our operators love to work with the Polystar blown film extruders, and so do I,” said Mr. Bai, the owner of the company. Mr. Bai has been working with machines since decades ago when he was just a technical operator.

“Our operators simply need to start the machine, stabilise the film bubble, and the machine will just go on and run for hours. It’s simple and stable. Less down time equals low maintenance cost,” Mr. Bai stated. 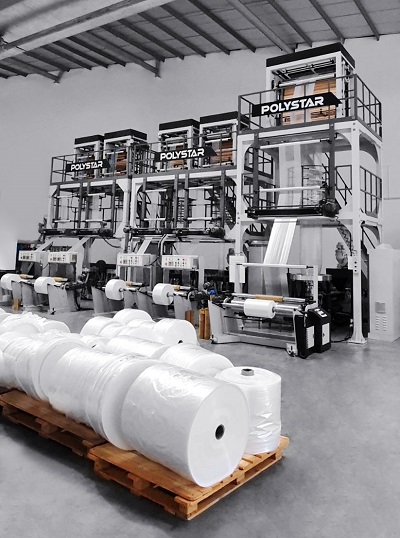 The company’s past experience with other machines had it constantly going back and adjusting the settings as the production was not as stable. “More production waste was generated, and our operators could not manage multiple machines at one time. With the Polystar machines, they can just start, sit back, relax and watch. The Polystar machines are always the first ones they start in early morning, so they can go work on other machines after that,”” Mr. Bai said.

The stability of the blown film machines also ensures product stability of other machines involved in the production process, such as bag making and printing machines. The even thickness control on the Polystar extruders make sure that the film rolls produced are well-prepared for the process that follow – it makes the bag making/converting and printing process much easier. “The bag making machines can seal better, and we have less defected products as a result,” Mr. Bai added.

The public-listed company located in Dong Nai province, who has invested in more than 30 sets of Polystar since 2016, has designed its new factories for 100% export purposes. It focuses on various products including draw tape garbage bags, star-sealed, bag-on-roll, T-shirt and shopping bags, exporting 100% to Europe, Australia and the US.

“We are very proud to show our international buyers the machines when they visit our factory,” said Ms. Thao, marketing manager of the draw-tape garbage bag producer, “Polystar is a global brand that is also well known in the countries where we export our products to. During the factory tours, our customers recognise that we have invested in quality machines, this helps them understand our commitment in product quality and why we should be their valuable long-term partner and supplier,” she added. 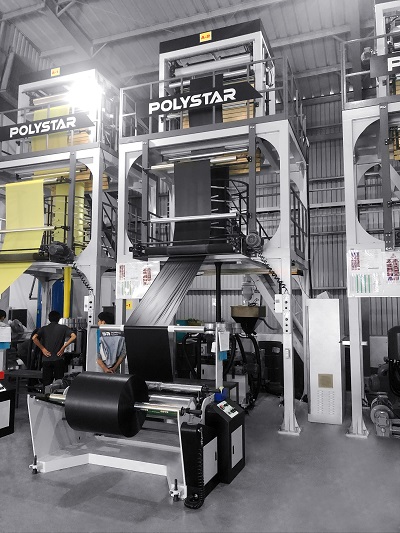 “The machines cover a wide range of products that we need to produce,” said Mr. Su, technical director of the factories dedicated for export products, “HDPE, LDPE, LLDPE, virgin, recycled or CaCO3, you name it. We use only Polystar extruders for our export products because it produces the quality our customers need,” he explained.

The director of Vipaco, a well-known film producer located in Hanoi who has started using Polystar in 2016, has witnessed the change in the market. “In the past, you could find maybe one or two companies using machine from Taiwan in the bag production market. Now you see Polystar everywhere in Vietnam. In a way, Polystar has changed the entire market and industry in Vietnam, setting new standards for standard machines,” said Mr. Tuan, who focuses on export markets for Japan and the US.

As more Vietnamese producers begin to understand the benefits of investing more in quality machines, Polystar is set to meet their expectations.