Recent developments in hot runner technologies are targeted to improve the injection moulding process. These solutions have been meeting the challenging requirements of plastic parts manufacturers in various sectors.
The state-of-the-art applications of HRSflow’s FLEXflow hot runner technology were aptly presented at several booths of partner machine producers at K 2019. Some of the machines were installed with the company’s FLEXflow
Hot runner manufacturer, INCOE, also unveiled its new SealFit™ Hot Halves at K 2019. A SealFit™ Hot Half includes a ready-to-go pre-assembled hot runner system with SealFit™ nozzles which has been installed and fully adjusted inside the related mould plates and which has been pre-tested for functionality before leaving manufacturing.
Integration with injection moulding systems
The injection moulding of an interactive dashboard that completely redesigns the vehicle interior was demonstrated by Sumitomo (SHI) Demag. The part is a clear example of how HRSflow’s FLEXflow Technology can manage back injection of polycarbonate (PC) on IMD film, avoiding typical aesthetical defects of the application. The process also includes overmoulding of capacitive sensors on the back side to provide a complete part after injection.
ENGEL also demonstrated three applications of HRSflow’s hot runner systems. The first application involved the injection moulding of a complex PMMA lightguide produced with a 5 point-gating FLEXflow hot runner system in a complex family tool, resulting in an ultra-clean optical grade part for longer and more complex LED structures.  Another application is the lightweight automotive door module using a HRSflow hydraulic system to allow balanced overmoulding of shaped organic sheets, made of glass fibre and using polypropylene as their matrix material. This is currently the only production cell in the world to simultaneously process three differently shaped organic sheets thanks to the targeted selection made by Brose after a variety of simulations. The mould has been produced by GK Tool. A further project partner was Kingfa.
Wittmann Battenfeld presented the injection mouding of a demonstrator cover integrating backlight functions and a 3D shaped capacitive sensor. The PC/ABS part, produced with a FLEXflow One hot runner system, is an example of back-injection on the new VarioForm film from Kurz. The mould has been produced by GK Tool. 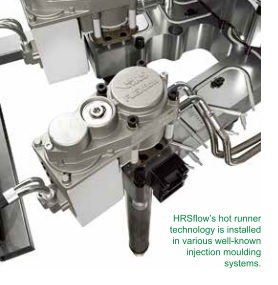 KraussMaffei showcased the production of an A-pillar interior component, back-injected on Alcantara through a FLEXflow One 2 drops system. The project was conceived in cooperation with other partners such as Georg Kaufmann Formenbau AG (GKTool), Alcantara S.p.A and Meusburger Georg GmbH & Co KG. Another company, Yizumi, demonstrated the production of an automotive engine cover realised with a FLEXflow One system, the electrically driven valve gate technology where an additional control unit is not required during the injection process. The engine cover is made of reinforced polymer with PUR overmoulding for a scratch resistant surface by Frimo. The part is a lightweight under the hood application conceived by GK Concept’s (Germany) expertise.
Arburg used a PCR (post-consumer recyclate) derived from household waste to produce a handle for the safety door of ALLROUNDER injection moulding machines. An electric two-component ALLROUNDER 630 A produces the handle from PCR and TPE by using the ProFoam foaming process. Both foamed halves of the handle are mounted in the mould and then partially overmoulded with the soft component. The hot runner system with two drops valve gate has been designed by HRSflow in order to ensure the perfect balancing of the two different cavities. A second system is used to inject the TPE component. A further project partner was Weber.
A division of INglass S.p.A., HRSflow has been providing FLEXflow hot runner technology for challenging applications together with recent developments targeted to improve the injection moulding process. These include examples for perfectly balanced Family Tools with extremely different part volumes, an extended cylinder range including a new series of Pneumatic Cylinders, the new SA series of nozzles for small shot weights and HRScool. HRSflow’s innovative solution for hot runner injection moulding in which water cooling of the associated actuators can be completely eliminated for the most common applications.
Reliable and user-friendly operation
For the launch at the European market, hot runner manufacturer INCOE offers the new SealFit™ Hot Halves. A SealFit™ Hot Half includes a ready-to-go pre-assembled hot runner system with SealFit™ nozzles which has been installed and fully adjusted inside the related mould plates and which has been pre-tested for functionality before leaving manufacturing. So a SealFit™ Hot Half represents a ready-made and tested pre-stage to complete half of a hot runner mould consisting of perfectly matched components - saving time and effort for the mould maker and increasing reliability during operation for the injection moulder.
SealFit™ means: All nozzles are screwed into the manifold producing a leak-proof connection between nozzles and manifold. By offering the related mould plates with the runner system, INCOE is enhancing the concept of supplying ready-made modules and following a request from the multi-cavity market where hot runner systems with SealFit™ nozzles have been successfully introduced.
Reduction of time and effort needed for project planning and management, design, manufacturing and assembly, a simplified start of production and increased production reliability are the main benefits of using Hot Halves. Furthermore, production reliability is increased by the SealFit concept with all nozzles being screwed into the manifold producing a leak-proof connection between nozzles and manifold and resulting in a reliable alignment between the flow channels of the manifold and the nozzles irrespective of the material and the process. 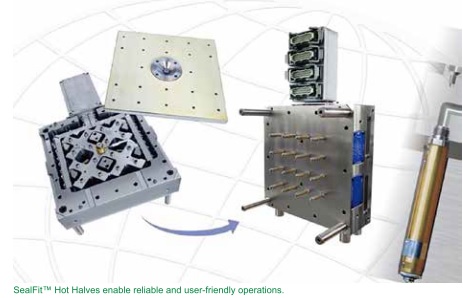