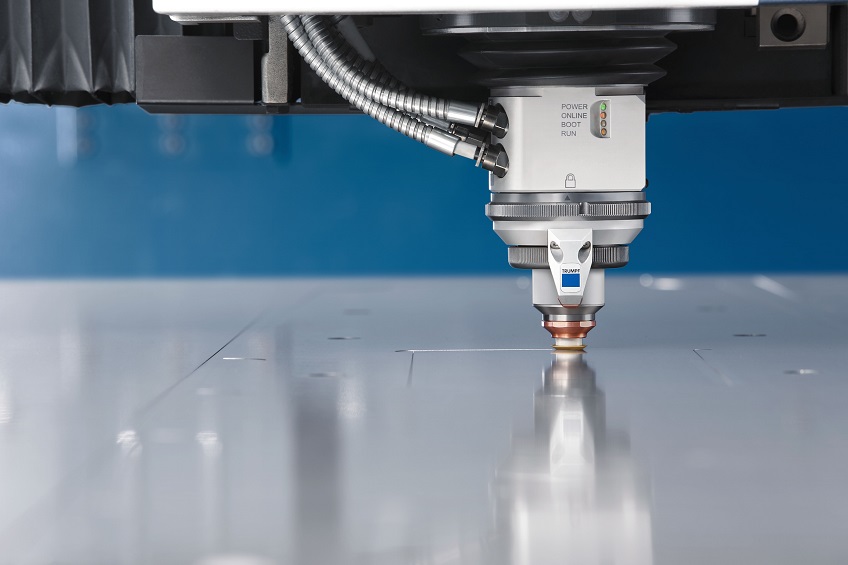 One exemple of sheet metal processing: Nitrogen cutting at record speed with a solid-state laser: The sheet throughput for medium to thick sheets is increased by up to 100 per cent. At the same time, the gas consumption goes down – by as much as 70 per cent with Highspeed Eco. Source: Trumpf Group

Metal forming technology accounts for about 30 per cent of machine tool production and is thus smaller than the machining sector. Forming technology machines include presses, bending machines, punching machines as well as wire working and processing machines. In the form of press technology it is used in larger and longer-lasting projects within the automotive industry, for example. Equipment for bending and punching, on the other hand, is used by a wide range of sheet metal processing customers.

For the first time since autumn 2018, the beginning of the year saw a stronger increase of 29 per cent in orders for German manufacturers for forming technology. “This raises hopes for an end to the downturn,” said Schäfer. Orders received by the sector in 2020 as a whole, however, were 29 per cent down on the previous year. Orders from Germany fell by 20 per cent. Foreign orders were down by a third.

“Forming technology performed at a similar level to the industry as a whole last year,” said Schäfer, commenting on the result. “It has been hit not only by the reluctance of the auto industry to invest, but also the crisis in aviation and the generally low levels of investment caused by the corona pandemic. Despite experiencing a twenty per cent decline, domestic orders still held up better than those of the machine tool industry as a whole, however, which posted a 35 per cent drop,” he added. This was particularly the case in the fourth quarter, when sheet metal processing picked up.

In 2020, the forming technology sector produced machines to the value of 2.2 billion euros. This represented a 29 per cent decline. Roughly 57 per cent of production is exported. Exports themselves fell by 27 per cent last year. The most important sales region, accounting for almost half of all revenue, is Europe, followed by Asia at 30 per cent and America at 20 per cent. The largest individual sales markets by far are China and the USA. Among the top 20 markets, the only two which posted increases last year were the UK with a small rise of 2 per cent and Canada with a double-digit increase of 73 per cent.

Domestic consumption, sales and imports fell by around 30 per cent. The list of top suppliers presented a varied picture. The five main importers – Switzerland, Italy, Austria, China and France – posted double-digit reductions, while the Netherlands, Sweden, Brazil and Portugal – all ranked among the top 20 suppliers – made substantial gains.

Capacity utilisation averaged 73 per cent in 2020, compared to 82 per cent the year before. At the beginning of 2021, however, it recovered slightly at 78 per cent.

When compared internationally, the German metal forming technology sector occupies a similar position to that of the machine tool industry as a whole: in 2019, Germany took the gold medal for exports and silver for production and consump-tion, in the latter two cases behind China. In all aggregates, both countries posted losses, although China suffered worse. Nevertheless, the lead of China’s production and consumption is so clear that even double-digit losses cannot jeopardise its position.

“This year’s forecast for forming technology mirrors that of the industry as a whole,” said Wilfried Schäfer. In 2021, the VDW expects production in the machine tool industry to grow by 6 per cent to around 12.6 billion euros. The forecast is supported by the improved sentiment in the economy based on the ifo Business Climate and Purchase Managers Index PMI, the large pent-up demand worldwide for investment and, last but not least, the Chinese powerhouse. China has overcome the pandemic and is expecting economic growth of 8.1 per cent in the current year. “However, our expectations for production are highly uncertain, depending on how the pandemic develops,” Schäfer concluded.