Metalworking has traditionally been slower than other sectors in its uptake of automation technologies. John Young, APAC director at automation parts supplier, EU Automation, looks at three key areas where current and future trends suggest metalworking is increasingly ready to shake off this reputation. 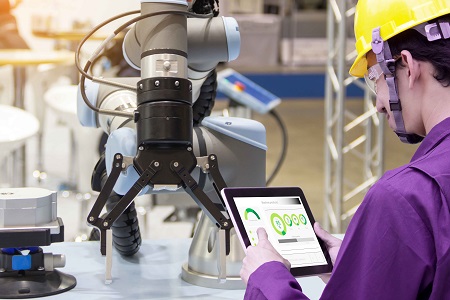 Not so long ago, 3D printing was mostly associated with rapid prototyping. In more recent years we have seen significant investment in additive manufacturing in the metalworking industry, driven by the demands of the defence and aerospace sectors.

This trend is set to increase. Recent research has estimated that the global market for 3D printing in metalworking is set to reach US$5.51 billion by 2027. With a predicted CAGR of 31.7%, the Asia Pacific region can anticipate higher growth rates than any other region in the world.

The pros and cons of this disruptive innovation are relative to the application at hand, but as the technology constantly improves, its benefits are increasing. The advantages include the ability to manufacture more complex and lightweight parts and offer the design flexibility that is necessary to compete in today’s highly competitive markets.

The drawbacks include the high costs and lower surface quality. However, the cost barrier is being lowered and combining both additive and subtractive machining, sometimes known as hybrid manufacturing, can help manufacturers exploit the unique benefits of 3D printing and CNC machining. We can already see the development of hybrid machines that combine these two contrasting processes into a single footprint.

3D printing or additive manufacturing (AM) is itself a form of automation. If we are talking about automation in AM though, we typically mean something more. Experts in this area are now focused on the integration of 3D printers into fully automated production lines with the assistance of the latest AM hardware and software.

A common trend is for the automation of post-processing functions and systems such as powder removal, part finishing, and part cleaning. Automating these parts of the production process is allowing some manufacturers to achieve higher levels of productivity and repeatability.

The metalworking industry is witnessing the increasing use of robots as the cost of the technology gradually diminishes and as manufacturers begin to see automation as a solution to skills shortages. The adoption curve is notably higher for cobots. In contrast to larger industrial robots that are built to act autonomously and are typically housed behind safety cages, cobots are designed to operate safely alongside human workers.

In addition to safety benefits, cobots are easy to use and train even for workers with no prior experience of using this technology. A human can guide the robot’s arm and teach it how to pick up certain objects, for example, without needing to understand complicated instructions. As they are relatively lightweight, they can be easily moved around the factory floor and manufacturers with limited floor space are appreciating this benefit.

A particularly popular application for cobots in metalworking right now is welding. Industrial robots are not particularly well-suited to welding, but the latest cobots offer a much greater return on investment.

Although some of the more optimistic figures will need to be revised downward to take account of the impact of the pandemic on the automotive industry, it is still expected that there will be a significant increase in growth in the cobot welding market. Again, as with 3D printing, the Asia Pacific region is expected to witness higher growth rates than other geographical areas.

A key factor that will drive this growth is a shortage of labour. Welding is a difficult and dangerous job so attracting newcomers to this line of work has proved problematic. That dilemma has confronted the US metalworking industry most severely, but a similar problem can be seen in China, India, South Korea and Thailand.

Another key area where automation is making headway in metalworking is through the utilisation of artificial intelligence (AI) to analyse the growing pool of data that is being gathered through smart sensors.

Manufacturers don’t have to invest in full system upgrades or fork out huge sums of capital investment to join this digitalisation wave. Retrofitting legacy systems with smart sensors is an alternative and cheaper way, of enjoying the benefits. These sensors can monitor things like vibration or temperature and if the data is analysed effectively through AI, factories can enjoy a range of benefits.

Perhaps the most obvious of these is the much-discussed notion of predictive maintenance. Let's suppose a high-pressure blower is failing unexpectedly and at a much higher rate than would be typical. Traditionally, human judgement and trial and error would be applied to the problem, but AI and advanced data analytics has a much higher success rate in predicting imminent failures. Costly downtime is avoided and parts can be ordered in advance of equipment failure from a reliable parts supplier like EU Automation.

As AI incorporates self-learning into processes, it doesn't just fix problems like the one outlined above, it fixes them and then continues to improve performance over time. Here’s an example: an Asian steel maker found that its CAS-OB process produced only a 55 per cent temperature hit rate, which led to reductions in speed at the caster as well as steel ladle returns. The historic data for ladle parameters was linked with the data on CAS-OB equipment state and process parameters. The result was not only an immediate improvement from 55 per cent to 70 per cent in the temperature hit rate but, as a result of self-learning, the machine was later able to reach a 90 per cent hit rate.

At a more general level, AI and data analytics can also help speed the uptake of other automation technologies by acting as a guide for decision-making. Let’s say a manufacturer is looking to make his or her first explorative foray into the world of robots, but feels overwhelmed by the amount of choice and the potential costs.

Digitalisation technologies, by gathering and more effectively analysing data, are better able to identify bottlenecks and areas of production where things are slowing down. This can help alert shop floor managers to those areas where automating processes might potentially yield the greatest results.

Automation, although coming later to metalworking than some other sectors, is making great strides. Even accounting for the negative impact caused by disrupted supply chains and reduced demand in the automotive industry, the metalworking industry across the Asia Pacific region will continue to see a growth in its adoption of automation technologies, and this will likely be at a pace that is faster than in other regions.