Lantek  is one of the pioneers in digitization of sheet metal production. It was already thinking about networking when most of the plants didn't even have a PC: Lantek Germany, based in Darmstadt, is celebrating its 25th anniversary. 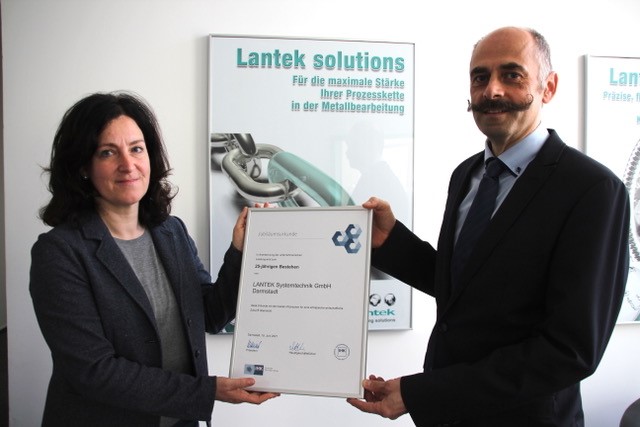 "It is as if Industry 4.0 was made specially for us," says Christoph Lenhard, head of the German Lantek office since it was opened. The German federal government first coined the term "Industry 4.0" at the Hanover Fair 2011 - 15 years after the German Lantek office opened. The IT specialist offers solutions to companies that punch sheet metal or cut using laser, oxy-fuel, plasma or water jet technology. With its machine manufacturer-independent software portfolio, it is one of the market leaders and supports companies of all sizes on their individual path towards digitization. Its platform solution is an efficient alternative to the software islands common in many companies for different areas of manufacture, which are often not able to communicate with each other, resulting in enormous additional effort standing in the way of an integrated system.

Christoph Lenhard is the face of Lantek in Germany and knows more than anyone else in the German-speaking world when it comes to software for sheet metal processing. Memories from 1996: "At that time, the CNC program for sheet metal processing, began to be programmed on the PC and no longer on the machine control," he reports from the early years of CAD, computer-aided design, and CAM, computer-aided manufacturing. "Lantek was one of the first on the market to do that."

Lenhard, who studied mechanical engineering, opened up the German market for Lantek - and conveyed Lantek's approach to the industry: software that works independently of machine brands gives companies complete freedom in developing their machine shops. Lenhard banked on the machine manufacturers to make Lantek a well known name in the German market, establishing the Lantek brand in Germany, Austria and Switzerland with the help of the machine manufacturers programming systems - equipped with Lantek CAD/CAM software. The great market potential that Lantek foresaw in Germany in 1996 has borne out. Today, the German office with 15 employees caters for around 900 customers - from contract manufacturers to international corporations. Lantek now has over 220 employees in 20 offices in 14 countries across the world, serving more than 25,700 customers in over 100 countries.

In spring this year, Lantek entered into a strategic partnership with the German machine tool manufacturer TRUMPF. Lenhard: "This is the good news for sheet metal production this year. Lantek will remain an independent brand and our development offices will also remain separate. However, our customers will benefit from each other's know-how for even better and more sustainable solutions."