High-technology company TRUMPF and the University of Geneva have fired up a laser-based lightning rod at the top of Säntis mountain in Switzerland. Over the next few weeks, the researchers will be using this powerful system to conduct a series of weather experiments. Their aim is to control lightning from storm clouds and direct the strikes to places where they won't cause any damage. TRUMPF laser engineer Clemens Herkommer – who works at TRUMPF Scientific Lasers in Unterföhring near Munich – has spent the past four years developing a one-of-a-kind super laser to make this goal a reality: "The laser lightning rod is currently one of the most powerful lasers in its class. By shooting a thousand laser pulses a second into the clouds, we can safely discharge the lightning and make the world that little bit safer!" says Herkommer. 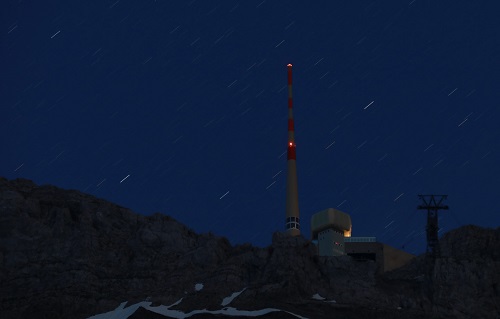 TRUMPF and the University of Geneva have put the laser-based lightning rod into operation on the 2,500-meter-high Säntis. © TRUMPF / Martin Stollberg

Airports, nuclear power plants, skyscrapers and forests are regularly hit by lightning – and the damage it causes runs to billions of euros each year. In the US alone, storms and lightning strikes cost the economy five billion dollars a year, mostly through disruption to air traffic and damage to aircraft and power lines. To tackle this problem, the EU launched the Laser Lightning Rod (LLR) project. At the heart of the project is the TRUMPF laser, which creates a kind of channel through the storm clouds known as a laser filament. Whenever a lightning discharge occurs, the laser filament leaves it no option but to follow this channel and strike the ground in a controlled manner. It cost around two million euros to develop the laser system.

Helicopter ride to the summit

"We've put a huge effort into this laser over the past few years to get it ready for its deployment at the summit of Säntis mountain. The laser works perfectly in the lab, and we’re very optimistic that it can control lightning in the atmosphere, too," says Herkommer. The project is led by weather researcher Professor Jean-Pierre Wolf of the University of Geneva. He and his research partners expect to have some preliminary results by the end of summer 2021.

The laser is nine meters long and weighs around five tons – so it was a huge challenge getting it to the top of the mountain. Clemens Herkommer and his project partners separated the laser into its individual components and transported them to the weather station at the summit by cable car and helicopter in late May 2021. After spending the past few weeks putting everything back together and making the laser operational, their weather experiments are now well underway. 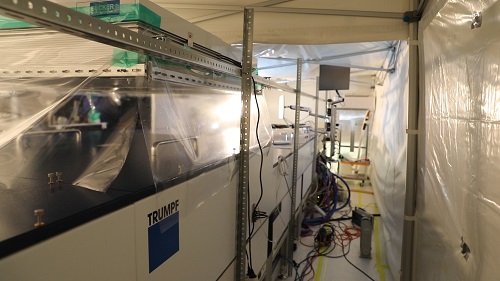 Säntis mountain in Switzerland proved to be the perfect choice for the laser lightning rod. Hundreds of lightning bolts strike Säntis during the period of peak thunderstorm activity in June, July and August.

Alongside TRUMPF and Professor Jean-Pierre Wolf, the project also involves the University of Geneva, the French National Centre for Scientific Research (CNRS), the AMC consultancy firm, the Swiss Federal Institute of Technology Lausanne, the ArianeGroup aerospace company and the University of Applied Sciences and Arts Western Switzerland (HES-SO).

The TRUMPF location in Unterföhring near Munich specializes in the development and production of lasers for scientific applications. It employs a team of around 15 experts on a variety of projects including lasers for novel x-ray sources and particle accelerators. The subsidiary was founded in 2012 with the goal of developing TRUMPF's capabilities in ultrashort pulsed laser technology and acquiring new customers in the scientific arena. This Munich-based site underpins TRUMPF’s strategic mission to drive forward cutting-edge developments in laser technology and future industrial applications through collaboration with scientific partners. 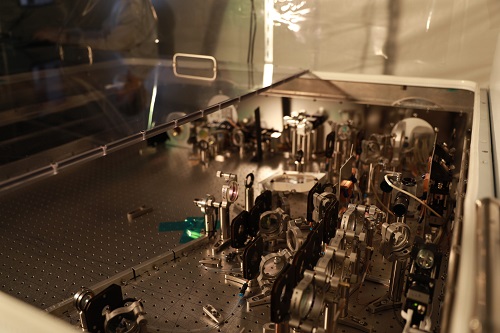 A look inside the laser

At the heart of the project is the TRUMPF laser, which creates a kind of channel through the storm clouds known as a laser filament. It cost around two million euros to develop the laser system.