Laser system for half- and shingled-cell cutting in photovoltaic manufacturing

3D-Micromac AG, the industry leader in laser micromachining and roll-to-roll laser systems for the semiconductor, photovoltaic (PV), medical device and electronics markets, today introduced an advanced laser cutting system for half- and shingled solar cells – the microCELL™ MCS. The new microCELL MCS advanced laser system has been designed to meet the PV market's demands for boosting module power output and service life by minimizing power losses and providing for an exceptionally high mechanical strength of cut cells. It enables the highest throughputs for cutting cell sizes up to M12/G12 into half-cells or shingled cells. 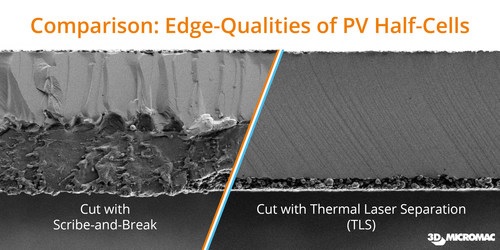 Heckert Solar GmbH, one of the largest and leading German manufacturers of high-performance PV modules, has purchased two microCELL MCS systems for its plants in Thuringia (LWD Solar GmbH) and Chemnitz.

Cell cutting fueling recent advances in PV manufacturing
In recent years, cutting solar cells into half-cells has become a key strategy for PV manufacturing by enabling remarkable gains in power output and mechanical strength at the module level. This trend has been accompanied by the switch to larger full-cell formats and the related increase in module power ratings1. Cutting cells into half- and third-cells or even shingles compensates for the increased power loss associated with the higher cell currents from larger wafer areas – ensuring that cell cutting remains at the heart of PV manufacturing for the foreseeable future.

The microCELL MCS system takes advantage of 3D-Micromac's patented thermal laser separation (TLS) process for cell separation. The ablation-free technique guarantees an excellent edge quality. As a result, the separated cells have up to 30 percent higher mechanical strength compared to ablative laser processes and enable a lower power degradation over the solar module's life cycle. By significantly reducing edge recombination losses and setting the stage for cutting edge passivation, TLS has been shown to achieve a module power gain of at least 2W.

Key benefits of the microCELL MCS include:

One-pass contactless dicing process, which provides for a significantly higher mechanical stability than conventionally processed solar cells2Unsurpassed flexibility on number of cell cuts – in standard configuration, the laser system cuts half-cells. Depending on the number of laser sources, the system is able to cut up to sixth-cut cells without decreasing the throughputSuperior productivity of more than 6,000 wafers per hourOutstanding upgradeability – easy integration of additional laser modules to increase the number of cell cutsFuture proofed by accommodating wafer sizes up to M12/G12Suitable for solar cells with temperature-sensitive coatings or depositions such as heterojunction technology (HJT) cells

"The use of half- and shingled cells in PV modules will have an enormous impact on industry growth in the coming years. With our new microCELL MCS laser system, we provide a future-proof production solution to module manufacturers that perfectly fits into an intelligent and scalable cell production line. The system can be upgraded with additional lasers with minimal effort to enable a higher number of cuts per wafer without compromising on throughput," stated Uwe Wagner, CEO of 3D-Micromac.

3D-Micromac will showcase the microCELL MCS advanced laser system at Intersolar Europe Restart, being held this week from October 6-8 in Munich, Germany. Event attendees can visit 3D-Micromac at booth A5.338 in Hall A to learn more.