Pablo & Rusty’s Coffee Roasters began in 2003 as an homage to its founders, brothers-in-law Peter and Russel. The firm started with a small roastery that supplied the company’s two cafes and a small but rapidly growing number of loyal customers. Demand grew quickly, so P&R moved its roastery into a larger space in Sydney, deciding to focus on wholesaling to partner cafes and online sales, while continuing to operate best-in-class cafes in Sydney and Brisbane. They are a B Corp and certified Carbon Neutral organisation. 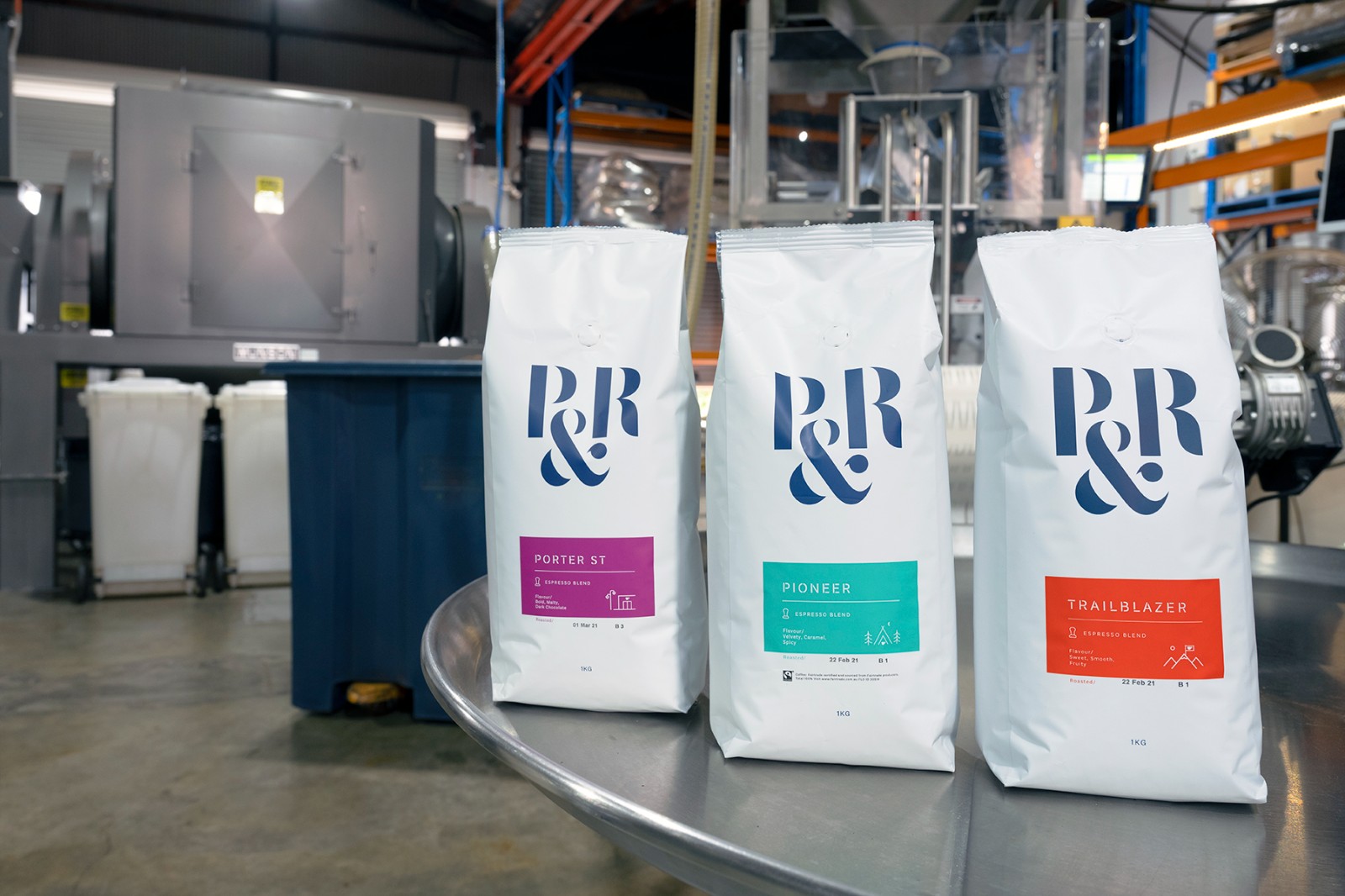 In Australia, the coffee and cafe culture favours espressos, which are typically mixed with milk. That preference is a key factor in how P&R selects, roasts, and blends its beans, says CEO Abdullah Ramay. “It’s preferable to use multiple origins of coffee to give a more balanced taste and something that can cut through the milk.” Each roasting cycle is adjusted to suit the beans’ profiles. Only after roasting are the beans blended.

Traditionally, Pablo & Rusty’s performed that blending process on a circular tray blender, in which spokes, or arms, extending from a central hub agitated the beans. With a capacity of 250 kg (551 lb) and typical cycles of 10 to 15 minutes, output was limited. More critically, the action of the arms pushing through stationary beans caused breakage. “The blending tray was becoming a bit of a bottleneck,” Ramay says, “but most important to us was reducing breakage and improving quality.”

That led the company to install a Rotary Batch Mixer which tumbles, instead of agitates, the beans.

Supplied by Munson Machinery, the model 700-TS-75-MS Rotary Batch Mixer is equipped with a horizontally oriented mixing vessel that rotates on external trunnion rings at both ends, obviating internal shafts and bearings. As the vessel rotates, internal mixing flights, also called baffles and lifters, create a four-way, tumble-turn-cut-fold mixing action that eliminates or minimises breakage of the beans, while achieving batch uniformity in three to five minutes. 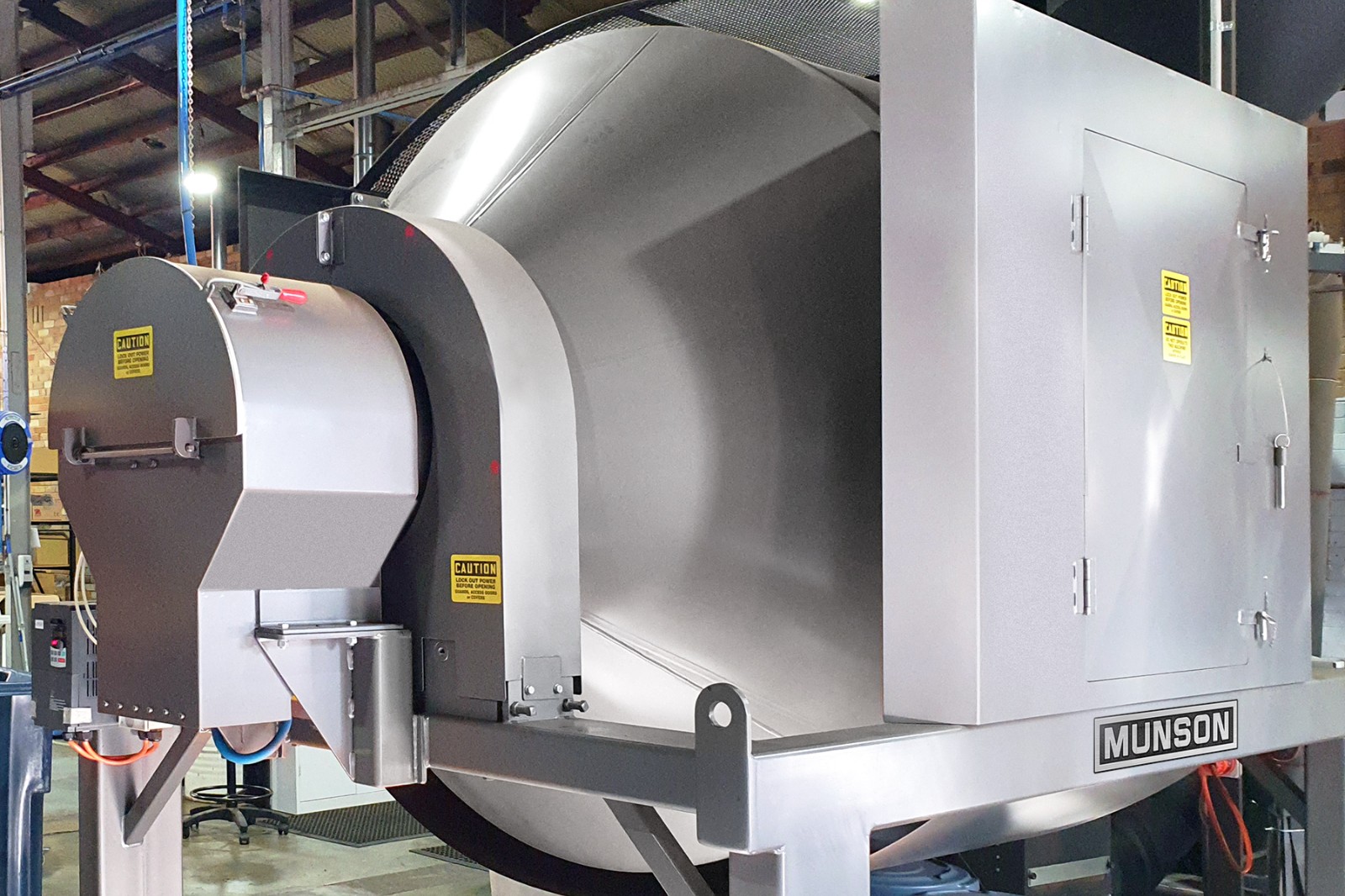 The Rotary Batch Mixer vessel rotates on external trunnion rings at both ends while the inlet and outlet remain stationary. Uniform distribution is achieved in under five minutes with no breakage of fragile beans.

“Gentle handling and less bean breakage were the prime reasons for the mixer. The second was its capacity of 2.1 m3 or 850 kg [75 cu ft or 1874 lb]), being able to blend four times more in a batch,” Ramay says. “And because the mixer has a quicker cycle, it will keep up with our growth.” The company has doubled its revenue over the last three years.

“We wanted to make sure that we can scale up, and with this piece of equipment, we can grow capacity about two to three times,” Ramay said. “We can also scale down, which was needed when Covid-19 happened.” 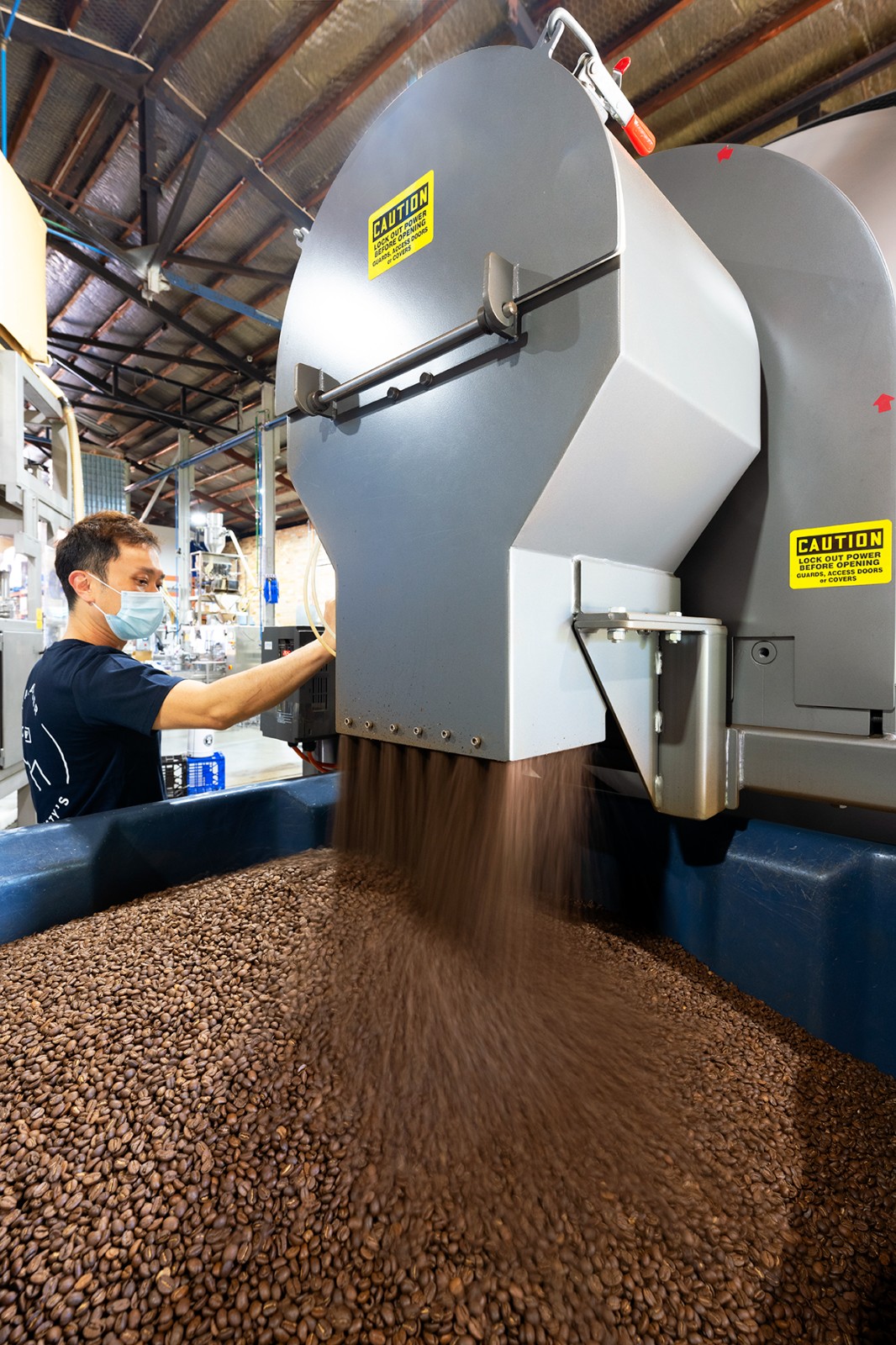 Internal flights direct beans toward and through a stationary discharge as the vessel rotates until fully evacuated, preventing segregation of beans having disparate sizes, shapes or bulk densities.

In operation, the beans rest for three to four minutes on a cooling tray after roasting. They then pass through a destoner and magnet and into a silo, or holder. The silo’s release is connected to the blender’s stationary inlet. When it’s opened, the beans flow into the vessel by gravity.

A typical mixing cycle lasts about five minutes. “We can do it in three, or three and one-half minutes, but we do five to ensure the best quality outcome,” Ramay said. A timer is used to control the process.

At the end of the blending cycle, the internal lifters direct the material through the discharge opening which, like the inlet, is stationary. The vessel rotates until discharge is complete, leaving almost nothing behind. Between batches cleaning is done with compressed air.

The company typically runs 4 to 10 mixing cycles a day over an eight-hour shift, and most batches are 300 kg or 600 kg (661 lb or 1,323 lb), with the mixer equally efficient at varying batch sizes. Roasting is done “in threes” to suit the company’s three varieties of coffee blends—Porter Street, Pioneer and Trailblazer. Typically each is a blend of beans from three origins.

For quality control, P&R measures and records a variety of data during each roast. With load cells built into the new mixer, the company can track how much moisture the roasting process removes. “We had a fairly good idea before but knowing the exact moisture loss is an added benefit,” Ramay said. The mixer is also dust-tight, unlike the tray blender.

The mixer fits P&R’s drive for sustainability because it runs about 75% less time per cycle, requires only a 7.5 kW (10 HP) motor (powered by a rooftop solar system), and more than triples the batch capacity of the previous mixer. Ramay says, “It’s a simple piece of equipment and is easy to maintain.”