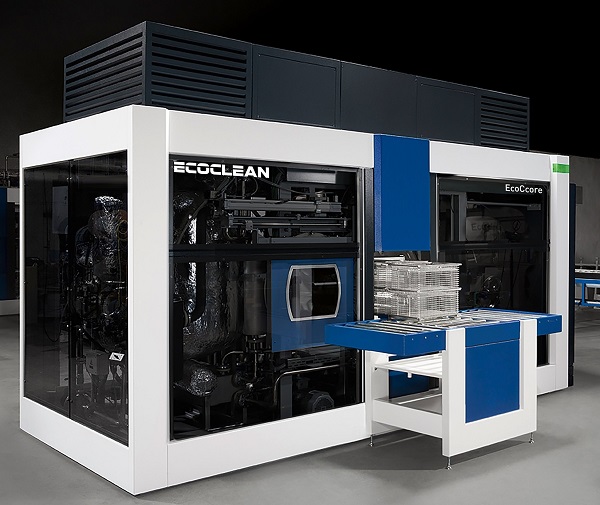 Today, component cleanliness is just as much a quality criterion as dimensional accuracy. It is defined by given particulate - and increasingly also thin-film - cleanliness specifications. Meeting these reliably can be quite a task. For operations to be cost-effective, it is becoming ever-more important to design cleaning processes in line with user requirements and for reproducible cleaning results.

Regardless what industry sector, parts cleaning today has become one of critical processes in manufacturing. For one, parts must be sufficiently clean for subsequent processing steps like coating, printing, heat treatment and assembly. For another, product quality and functionality are crucially dependent on clean components. In recent years, the focus has been on removing particulate contamination, including chips produced in machining and forming processes, but also burrs and particles generated from abrasion. Meanwhile, thin-film contamination has also taken on a more prominent role. This is because the tiniest residues of machining oils and emulsions, cleaning media, drawing, forming and release agents, etc., can impair the quality of the joints in joining processes such as laser welding, soldering and bonding . When it comes to thin-film contamination, cleanliness specifications are often defined in terms of surface energy or surface tension (mN/m = milli-newtons per meter). Compliance can be checked comparatively easily with test inks and by measuring contact angles.

For the vast majority of parts, specifications regarding particulate and/or filmic cleanliness can be met using wet chemical cleaning processes. The parts are generally cleaned in batches, either in bulk or arranged in part carriers. However, a stable and reproducible process quality and consistently good results can only be attained if the cleaning chemicals as well as the system engineering and process technology are optimally tailored to the cleaning task.

Choosing the right cleaning medium for the contamination

When selecting the cleaning medium, the chemical principle of “like solves like” can serve as a guideline. This means: polar contaminants such as cooling emulsions, polishing pastes, salts, particles from abrasion and other solids are normally removed using water as a polar cleaning medium in conjunction with pH-neutral, acidic or alkaline cleaners. For mineral oil-based (organic, non-polar) contaminants such as machining oils, greases and waxes, solvents like non-halogenated hydrocarbons or chlorinated hydrocarbons are generally used. Modified alcohols (3-butoxy-2-propanols) have lipophilic and hydrophilic properties and are therefore capable of removing both non-polar and polar contaminants to a certain extent.

To determine exactly which cleaning medium is best for effectively removing the contaminants adhering to the respective parts, cleaning trials with original contaminated parts are recommended. In its technology centres around the world, Ecoclean GmbH disposes of a variety of cleaning systems for all types of media. They are used to conduct tests on parts made of metallic materials, plastics, ceramic materials, glass and combinations thereof. In addition to the achievable cleaning result, the team also checks that the materials of the components to be cleaned are compatible with the cleaning media used.

The faster and more effectively the predefined cleanliness specifications are met in the cleaning process, the lower the proportion of costs that are incurred for each cleaned part. The cleaning effect of the medium is therefore enhanced by various physical process technologies such as spraying, vapor degreasing, dipping, ultrasonics and injection flood washing, as well as highpressure cleaning, which is used to deburr the parts at the same time.

During spray cleaning, the kinetic energy of the jet boosts the effect of the cleaning chemicals used and removes impurities from the component surface. Pressures between 2 and 20 bars are applied to all or specific areas, for example boreholes and blind holes. Especially with pinpointed spray cleaning, the cleaning result depends on how the nozzles are directed at the surface to be cleaned. The result can be improved if the part is moved relative to the spray nozzle or vice versa. Where particulate cleanliness requirements are high, spray cleaning can also be used as a final cleaning step to remove any small particles still adhering to the surface.

During vapour degreasing, which is carried out in the closed working chamber of a solvent cleaning system, the cleaning medium is heated to boiling point and the resulting solvent vapours are directed at the components to be cleaned. The temperature difference between the hot vapours and the cooler component causes the solvent to condense on the surface of the workpiece so that the solvent condensate has a rinsing effect. Steam degreasing is used to remove contaminants such as oils, greases and emulsions from lightly soiled parts.

In immersion cleaning, which can be carried out with water-based media and solvents, contaminants are primarily removed by the chemical action of the medium. This effect can be enhanced by swiveling and rotating the parts. The process is mostly used for parts with complex geometries, such as blind holes or undercuts, and frequently combined with injection flood washing (IFW) and/or ultrasonic cleaning.

Injection flood washing is used in almost all cleaning processes involving components that are heavily contaminated with chips and oil or emulsion. The parts are subjected to pressures between three and 15 bars in an immersion bath. Since this is done below the level of the liquid, high volume flows are generated which can easily penetrate the cavities even of very complex workpieces.

The cleaning effect of ultrasonic units is based on cavitation: the electrical signals generated at a specific frequency by an ultrasonic generator are transmitted by a transducer as sound waves to the cleaning liquid. This results in an interplay of negative and positive pressure, with microscopic cavities forming in the negative pressure phases, which collapse (implode) in the ensuing positive pressure phase. This creates microcurrents in the liquid, which virtually ‘blast’ and wash away any particulate and thin-film contamination adhering to the parts. For the cleaning effect, the following applies: the lower the frequency, the larger the cavitation bubbles and the higher the energy released.

Deburring and cleaning in a single step

The use of water jetting at high pressure, usually in the range of 300 to 1,000 bars but sometimes higher or lower depending on the application, makes it possible to reliably remove machining-generated feather burrs from parts and clean them at the same time. High-pressure cleaning is also used to remove sand residues from castings and stubborn soils from part surfaces, including welding residues and scale. The pressures used depend on the type and level contamination as well as on the test results obtained in Ecoclean’s Technology Centres.

In addition to the cleaning medium and the system technology, the personnel operating the cleaning system influence the quality of the process. Knowledge of the interrelationships and processes of the parts cleaning step in manufacturing is therefore crucial in order to meet cleanliness requirements reproducibly and cost-effectively.