The Munich-based chemical group WACKER opened a new production site for silicones in Panagarh, India. The plant, which is situated 160 km northwest of Kolkata, will manufacture silicone rubber and ready-to-use silicone compounds for electromobility, medical technology and electrical transmission & distribution. A subsequent expansion stage is planned in the medium term for the production of silicone fluids and silicone emulsions.

The site is part of WACKER’s new growth strategy, which the Group presented to investors and analysts at the end of March while at the same time announcing substantial investment in its chemical divisions. In order to serve the increasing demand for silicones in India and to consolidate its position as a leading silicone producer, the company will invest a mid-double-digit million euro amount in Panagarh in the next few years. The first expansion phase will create around 100 new jobs at the site.

WACKER and its Indian Joint Venture Wacker Metroark Chemicals (WMC) have already been operating a production site for silicones near Kolkata since 1999. The new plant, located around 160 kilo-meters northwest of Kolkata with an area of 165,000 square meters, is three times the size of the existing site in Amtala, where silicone fluids and silicone emulsions will continue to be produced for the cosmetics and personal care industries.

“Panagarh offers excellent infrastructure and very good connections to the Indian railway and road networks. However, the main benefit of the site is its space. We will use this to significantly expand our production capacity in India and strengthen our market position on the Indian subcontinent,” said WACKER Executive Board member Auguste Willems at the opening ceremony. “This additional production capacity will double the amount of silicone we produce in India in the medium term.” 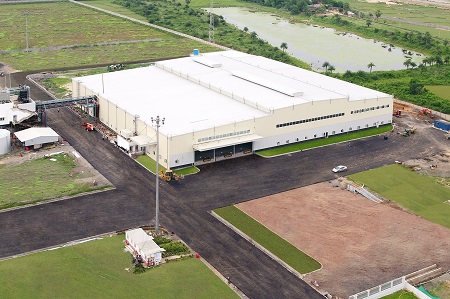 WACKER intends to expand production at the new site in several stages. Currently, high-consistency- and room-temperature-vulcanizing solid silicone rubbers, liquid silicone rubber and SILMIX® ready-to-use silicone compounds are manufactured in Panagarh. These products are used particularly in electromobility, medical technology and electric transmission and distribution. In the next stage, it is planned to produce silicone fluids and silicone emulsions for cosmetics, textile and personal care applications. “This way we can supply our customers in India even better and more quickly with our specialty silicones,” said Willems. He announced a double-digit million-euro investment in Panagarh for the next five years. “We will expand this site step by step and thus continue to strengthen our leading position as the largest silicone manufacturer in India.”

Soumitra Mukherjee, president and managing director of Wacker Metroark Chemicals, considered the new site to be an important milestone in the cooperation between the two companies. “The merging of WACKER and Metroark almost a quarter of a century ago laid the foundation for a successful partnership. The new Panagarh site will continue this Indo-German success story.”

Sustainability was a key factor in the construction of the production plant. Numerous measures were taken to significantly minimize the environmental impacts. For example, river water for production will be provided via pipelines in order to protect the groundwater reserves. WMC is also planning to use solar energy and renewable raw materials to generate energy and heat. As the site is located in a rice-growing area, husk from rice production can, for example, be used to generate energy. Theh site will not just provide several hundred people with jobs, but will also strengthen the local industry.